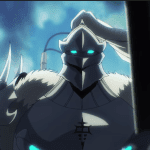 Greetings, anime fans. I hope everyone is doing well. You guys are smitten with the action of Ainz Ooal Gown after watching Overlord and want to watch more anime like this. So, keeping that in mind, we have compiled a list of the top 8 anime like Overlord with overpowered MC. So, if you love action anime with ruthless and overpowered MC, sit tight because this will be a bumpy ride.

You will most definitely also like the following articles:

Without any further ado, let’s get started with our blog.

Contents hide
8. Death March to the Parallel World Rhapsody
7. Btooom!
6. That Time I Got Reincarnated As A Slime
5. How Not to Summon a Demon Lord
4. The Rising Of The Shield Hero
3. One-Punch Man
2. Arifureta: From Commonplace to World’s Strongest
1. Jujutsu Kaisen
Related Posts:

Death March to the Parallel World Rhapsody is an adventure, isekai, and fantasy anime that is the perfect headstart for our list of anime like Overlord with overpowered MC.

The story revolves around Ichirou Suzuki, a game developer working day and night to fix bugs in the newly released game. He was so busy fixing the errors that he could even find a moment to sleep and rest. One night, after a lot of work, Suzuki decided to take a small nap, but that sleep changed his life forever.

When he woke up, he was isekai’d into a game world where his appearance was changed. He looks ten years younger than his actual age, and his name in this world was Satou. Suddenly, a massive army of lizardmen attacked Satou, and he could do nothing except run.

In a desperate attempt to save himself, Satou used a special power-up that boosted his level to the max, becoming an overpowered guy.

What’s Satou going to do now in this different world? Follow his journey to find out.

Btooom! is an action/sci-fi anime that tells us the depressing story of Ryouta Sakamoto. Sakamoto is good for nothing as all he always does play a video game called Btooom!. His mother wants him to achieve something bigger in life, but the only achievement he has ever accomplished is being the number 1 player in Japan.

However, one day he was kidnapped from his home and thrown on an unknown island. At first, Sakamoto thinks he is dreaming, but when a random guy attacks him with a bomb, he realizes he is in the real-life world of Btooom and the only way to survive it is by killing others. Sakamoto may be a useless guy, but by heart, he is one of the purest guys, and there’s no way he could kill any person.

Through his journey, he met many people and made many great friends, but will he be able to escape this living hell without killing anyone? For that, you have to watch this anime. So, what are you waiting for? If you love watching anime with OP MC, this anime is perfect for you.

6. That Time I Got Reincarnated As A Slime

That Time I Got Reincarnated As A Slime is an action, adventure, comedy, and fantasy anime like Overlord with an overpowered MC that will surprise you with its isekai and reincarnation theme.

The story revolves around a 37-year-old guy named Satoru Mikami, who loves his everyday life. He goes to his job, returns home, and sleeps peacefully on his bed; honestly, that’s enough for our MC. However, he sometimes feels lonely because he has never been in any relationship with a girl.

One day our MC returned from his job and met a colleague. He decided to say hi to him, but he never knew this casual conversation would change his life forever. As he was talking to his colleague, a random man came and stabbed Satarou resulting in his death.

Well, if you think the story has ended before even getting started, you are wrong. Instead of dying, our MC was reincarnated in a different world as slime, and the moment he reincarnated here, he got tremendous powers and abilities. Moreover, he is surrounded by beautiful girls in this world and loves it.

5. How Not to Summon a Demon Lord

How To Not Summon A Demon Lord is a comedy, fantasy, and ecchi anime with one of the best harem themes. It revolves around the story of Takuma Sakamoto, a gamer feared in the world of Cross Reverie. He has leveled up his character, the Demon King Diablo, so much that the opponent admits defeat as soon as they match against him.

Despite being an overpowered demon lord in the game world, Takuma was a socially awkward guy with no friends. He loves his gaming life so much that all he does throughout his day is challenge different players. However, Takuma’s ordinary life was turned upside down when he was reincarnated in a strange world similar to his favorite game.

Upon entering this realm, our MC met Rem Galeu and Shera L. Greenwood. These two girls summoned him into this world and performed Enslavement Ritual on him, but that ritual backfired, and both became Takuma’s slaves. So how is Takuma going to survive in this world? Watch this exciting anime like Overlord with overpowered MC to find out.

4. The Rising Of The Shield Hero

The Rising of The Shield Hero is an action, drama, fantasy, and adventure anime, and it is considered one of the most popular anime of all time. The story takes place in the Kingdom of Melromarc, where four ordinary men from Japan are reincarnated into this world as heroes.

They are known as The Four Cardinal Heroes, and all are said to have exceptional powers and abilities. While the other 3 got legendary powers and items to fight, our MC Naofumi was only given a shield. He was naturally selected as a Shield Hero, and everyone made fun of him because he was weak. People living there bullied him and turned his life into a living hell.

The only person who decided to train with him accused him of sexually assaulting her, and that’s when our MC chose to give the people of this kingdom a shut-up call. With the pain of betrayal in his heart, Naofumi has started his journey to become the most powerful guy in the kingdom of Melromarc, and no one can stop him.

One-Punch Man is an action/comedy anime, and I don’t think there’s anyone in this world who has not heard about this anime like Overlord with overpowered MC. One Punch Man revolves around the story of a guy named Saitama and his journey to becoming the most overpowered character in the history of anime.

Saitama had only one dream since childhood: to become a hero. To accomplish his objective, he trained day and night for three years and became strong enough to defeat anyone with one punch (that’s why we call him One Punch Man). Well, he became the strongest guy possible, but thanks to excessive training, he lost all of his hair (Saitama won but at what cost?).

Later as the anime progresses, Saitama meets Genos, a 19-year-old guy who got inspired by Saitama’s strength and became his pupil. They both then decided to join the Hero Association so that society remembers them in an exemplary manner. If you are looking for anime like Overlord, I strongly recommend watching One Punch Man.

2. Arifureta: From Commonplace to World’s Strongest

Arifureta: From Commonplace to World’s Strongest is an action, adventure, and fantasy anime similar to Overlord with overpowered MC famous worldwide because of its isekai elements. It revolves around the story of Hajime Nagumo, a 17 years old guy whose life was turned upside down when he and his whole class were reincarnated in a fantasy world.

They were summoned here to save humanity and were blessed with many extraordinary abilities. While everyone in his class got splendid magical abilities and powers, our MC received nothing (that’s not fair). Everyone bullied him only because he was a weakling, but one day when he was betrayed by his classmate and was pushed inside an abyss, things changed.

The abyss was filled with dangerous monsters, and our MC tried his best to survive this living hell. He then met a vampire who agreed to help him escape that abyss. Not only that, but Hajime has also activated his powers and is now retaliating against those who have mistreated him. Watch out, bullies.

Jujutsu Kaisen is an action/fantasy anime, and this anime gives us all the reason to put it at the number 1 spot on this list. It revolves around the story of Itadori Yuji, a hyperactive and extremely strong guy whose life turned upside down after a small incident.

Yuji accidentally ate the finger of Sukuna Ryoumen, a demon king known as the King of Curses. You might think Yuji would have gone crazy after consuming his finger, but that turned out in his favor. As a result, he gains tremendous strength and supernatural abilities, such as seeing the curses and magical monsters with his eyes.

Seeing Yuji’s potential and power, he was immediately enrolled in Tokyo Metropolitan Jujutsu Technical High School to become a sorcerer and help people eliminate the curse from society. This anime displays strength, power, action, and bravery, so if you are looking for anime like Overlord with an overpowered main character, watch this one. You’ll love it.