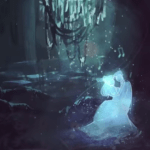 A part of the Warlock and its powerful abilities are the various magical items that can be given to a player using this class. Sure, there are different magical items they can gain that benefit any class that is given a chance to acquire them.

Still, this list will count down a select number of Magical items that best help Warlocks and their capabilities. For the sake of this list, there will be no limitation on the expected level of whatever the Warlock happens to be for these items.

Delivering a message within Dungeons and Dragons is as wide of a selection as many things within the game are. As such, one method that is available to Warlocks through the Talking Doll item.

This little Doll can speak up to six phrases that are six words long at a maximum and is mostly meant for pranks or delivering incredibly short questions/answers via the Doll to a specific person.

There are much better methods for this, like Spell for having a physical letter sent via a courier or an animal trained to make such deliveries. However, there is the chance a Dungeon Master could give inspiration to the Warlock Player Character if their usage of the Doll is enough to warrant it.

11. Tome of Leadership and Influence

Tomes are incredibly powerful objects when a player gives up the time to be able to sit down and completely read through it all. For example, the Tome of Leadership and Influence increases the Charisma Ability Score and its Maximum level by 2, making a player’s absolute maximum in their Charisma a 22.

This is very helpful for any Warlock player, as the Charisma Ability score is the ability used for their spell casting, though this doesn’t bump the current score up to the max unless it was already there, to begin with.

The different selections of Staff within Dungeons and Dragons could very well warrant its own list of the best ones to choose for certain purposes. However, the Voyager Staff promotes the Warlock to explore and travel the world with its wide spell list that helps in those endeavors.

For example, the Spell is capable of Teleporting a party to where they could need to go or to be able to walk through walls via the Passwall Spell to help navigate a maze or a dungeon with a rather confusing layout. Misty Step and Blink are also available as spells for the Staff, with the most interesting Spell among the different options being Banish.

These spells have their uses outside or within combat encounters, but the Staff and its spell list are mostly meant to promote exploration of areas the Warlock finds themselves in.

Disguises and Stealthy tactics are more of the game for the Rouge or the Bard. However, such an item allows the Warlock to play along with that game. The Hat of Disguise allows the Warlock to case Disguise Self upon themselves, allowing them to create a disguise to get them through to areas that they would have a difficult time normally doing or would not be able to do without getting into legal trouble.

Since Warlocks normally have a high Charisma Ability Score, they can double down on their disguise via Persuasion checks and help the Party by infiltrating certain areas that a Rouge would normally do. Effectively, this hat allows the Warlock to fill in for the Rouge in case the Party does not have one within its ranks.

The saving throws on certain spells can sometimes critically wound or graze a character, depending on the roll made for the saving throw, along with the DC for said Saving Throw.

Warlocks can gain an advantage on all those saving throws with the Ring of Spell Turning, which has an extra little feature that acts as a reward for landing a good roll on the Saving throw.

For example, should the Warlock roll a 20 for the Saving Throw. The Spell that was cast at them is instead reflected at the caster, causing them to get hit. This can be a helpful tool against a type of enemy mostly reliant on ranged spell attacks, especially bosses capable of dealing high amounts of damage through those said ranged spell attacks.

For all of the Characters that are made within a campaign, one Constitution is very important, as it dictates the character’s maximum Health Pool; However, it is more important for Spellcasters as Constitution also affects Concentration Checks. As such, the Amulet of Health automatically boosts the Constitution Ability Score of the Warlock to 19.

This item grants them a higher Health Pool than what they normally would have had without the amulet, but it also gives the Warlock a better chance at retaining concentration on their most powerful spells that would require such focus.

There are many items, rings especially, that can hold the potential to be powerful items that can drastically improve the capabilities of the player that is using them. The Ring of Shooting Stars is no exception, as without having to expend one of the six charges the ring possesses, the Warlock can cast Light or Dancing Lights to help on a Utilitarian front to help light the Party’s way.

However, using a charge, they can cast Faerie Fire, which normally isn’t possible without selecting a specific patron for the Warlock. However, its most powerful abilities are the Ball Lightning and Shooting Star Spells, which cost two charges to cast.

Using these at will through Ring Charges can be a definite trump card in the Warlock’s sleeve if the Party is facing up against an incredibly dangerous creature with a high Health Pool.

Warlocks and their fashion tend to hang about more around the mindset of functionality over form, which can be especially true about the Hunter’s Coat. This Fashionable leather coat adds a +1 to a Warlock’s AC and holds three charges.

Spells that help with Movement and positioning within the battlefield can be extremely helpful, especially for a Warlock. Warlocks, with the right Eldritch Evocations, tend to have back behind the rest of the Party and snipe enemies from afar with Eldritch Blast.

However, sometimes the Warlock needs to move rather quickly in case an enemy happens to be closing the distance between him and them. The Amethyst Lodestone does help with this a bit by allowing the user of the Stone to either cast Fly on themselves.

Use the Stone’s Gravitational Thrust ability to push them back, or use all three of the Stone’s charges to case Reverse Gravity. All of these options are to help the Warlock remain out of the Melee Range of an enemy. Second, to be able to continue sniping enemies with their spells.

Keeping to the idea of Movement and distance, The Broom of Flying is a wicker broom capable of flight to a certain extent. Having such an object means that the Warlock can take advantage of the height capabilities of flight without having to spend one of their precious few spell slots on the actual Fly Spell or the Featherfall Spell.

This can even work in tandem with the previously mentioned item, as one could use the Broom to fly away from an enemy and then use the Reverse Gravity Spell to further distance the enemies from the Warlock Player Character.

One of the best items for a Warlock to get is capable of expanding the number of spell slots available to them. As such, the Staff of Power is a must-have for most Warlocks during a campaign, as not only does it add a +2 modifier to ability checks, saving throws, attack rolls, damage rolls, and the Warlock’s AC once they attune to it.

However, it also holds 20 charges that the Warlock can use to cast various spells that are naturally available to the Warlock, such as Cone of Coldness, Sphere of Invulnerability, and Fireball. Of course, any spellcasting class can attune to this Staff and use its power, but the Warlock benefits from the Staff the most.

1. Rod of the Pact Keeper

As mentioned before, Items that increase the spell slots of a Warlock or allow them to regain them are the best items for Warlocks to obtain. So, it is no surprise that the Rod of the Pact Keeper is one of the most popular items for a Warlock to use during a campaign.

Similarly to the previously mentioned item, the Rod gives a modifier the spell attack bonus and spell save DC depending on the Rarity of the Rod (+1 to +3). However, Rod’s main ability is to replenish a single Spell Slot once daily.

While this doesn’t seem like a lot for other spell casters, gaining back a single spell slot of their choice can change everything during a battle. Since it allows them to be able to cast one of their more powerful spells again with no real issue.

Many items within DnD can be highly useful for the Warlock that was not mentioned here, as these items bore proper mentioning to anyone reading this list. A player should keep their eyes open for any of these game-changing items if they are playing as a Warlock, as it can greatly improve their combat capabilities and help out both the player and the Party as a whole later down the road.