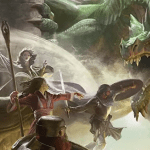 Calling from the heavenly skies above, Mother Nature answers a druid’s cries by bringing down lightning to strike down the earth. With the third-level conjuration spell, Lightning Bolt, druids can create and use the storms to attack whoever goes against you and your party members.

What is Call Lightning 5e: mechanics and requirements

A storm cloud appears in the shape of a cylinder that is 10 feet tall with a 60-foot radius, centered on a point you can see 100 feet directly above you. The spell fails if you can’t see a point in the air where the storm cloud could appear.

When you cast the spell, choose a point you can see within range. A bolt of lightning flashes down from the cloud to that point. Each creature within 5 feet of that point must make a Dexterity saving throw. A target takes 3d10 lightning damage on a failed save, or half as much damage on a successful one. On each of your turns until the spell ends, you can use your action to call down lightning in this way again, targeting the same point or a different one.

If you are outdoors in stormy conditions when you cast this spell, the spell gives you control over the existing storm instead of creating a new one. Under such conditions, the spell’s damage increases by 1d10.

At Higher Levels: When you cast this spell using a spell slot of 4th level or higher level, the damage increases by 1d10 for each slot level above 3rd.

Before combat even starts, using this spell is a great tactic to throw off unsuspecting enemies. Especially since the cloud is what strikes it instead of the caster, you can strike enemies when they least of combat. But that ambush attack doesn’t last until your enemies put one and two together.

By the time you are driven to engage in combat, you and your party can make the most of this spell by working together. If you have party members and allies with high dexterity and who specialize in melee attacks, you can coordinate with them and have them near a shared target to deal more damage.

A Change of Weather

If you need 10 minutes of stormy weather, you can definitely use this spell. This can be useful when you may need to shoo off creatures in an open area or even cause a fright. You may use this spell in many applications outside of combat, and the skies are the limit!

Protecting your home turf whenever you and your party face intruders or even an invasion is always important. Up on the high ground with a clear view of your surroundings, it is best to ensure that you have some cover to protect you as you defend your base. You can then most certainly defend your territory with no problem.

Let’s say that some enemies are approaching your home base. As you and your party members run through basic protocols, you, as the spellcaster, make your way to the roof of your base, provided that you have a cover. Using the Call Lightning spell in this situation, you have plenty of range to work with, along with tremendous damage to take down your enemies.

With the spell description in mind, the Call Lightning spell creates an epic entrance during combat or even roleplaying. If you’ve ever wanted to look like the God of Thunder and Lightning, like Zeus and Thor, using this is an awesome way to enter any situation to look like a demigod. Using extra flavor to spice up this spell, like the Light and or Thaumaturgy cantrip, is a cool way to add special effects.

There’s more striking for druids than using the Call Lightning spell! Not only is it flashy, but with this, you can call lightning upon whichever enemy you desire while they least suspect. What’s more, you can repeatedly inflict a great deal of damage to the enemy and others with your lightning strokes.

Like any spell with an area of effect, it’s best to plan out who you target and where you may cast it to make the most out of this spell. This is mainly because you will have to consider the environment that you cast it in to even work. This spell is recommended for the beginner player and Dungeon Master to use in future sessions.

Can the Call Lightning spell be in conjunction with itself or other magical spells?

Can two characters use the Call Lightning spell from the same storm?

According to the spell’s description, “the spell gives you control over the existing storm”. With this in mind, it does not necessarily specify if that means being one or more people. So, it can be assumed that two spellcasters can share the same storm unless the Dungeon Master says otherwise.

Is the cloud always centered on the caster or can it be conjured anywhere in the 120-foot range?

About the spell’s description, the storm cloud would be positioned and centered on a point you can see 100 ft directly above the spellcaster. But the lightning can be struck 120 ft away.

It is very much possible to cast the Call Lightning spell indoors. However, there needs to be sufficient space to do so. As long as the room is 110 feet high with a width of 120 feet and the spellcaster is in the middle, you’re good to go in using this spell.