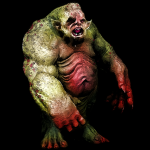 The personification of utter displeasure and disdain, the Dretch will leave those below them in complete misery. These demonic creatures are the reincarnation of chaotic evil mortals who once wreaked havoc. In this article, learn more about the works of this lowly fiend of the Underworld.

Contents hide
What is a Dretch 5e: mechanics and requirements
Attributes
Dretch actions
Advantages and drawbacks of using Dretch 5e
Advantage
Disadvantage
Best uses for Dretch 5e
A Demon Army
A Gag Creature Encounter
Rising through the Ranks
Advice and final thoughts
Dretch FAQ
How does the Dretch’s Fetid Cloud’s poison works?
In which plane can Dretches be found?
Related Posts:

What is a Dretch 5e: mechanics and requirements

Perhaps in this world you’ve created so happens to have a demon overlord or a group of cultists, the Dretch is the perfect creature for you! As the lowest ranked demon, they most likely have a superior ruling over them. So feel free to unleash a whole army of demons and Dretches for your party to go up against into the home plane.

Bearing in mind the Dretches’ low wisdom, charisma, and intelligence stats, it can be a fun encounter for your players to stumble upon. You can use this creature to annoy your players or even have them use their intelligence to outsmart this not-so-smart fiend/ Feel free to be as silly and goofy as you want when roleplaying this fiend!

Rising through the Ranks

Given the Dretches’ chaotic evil nature, perhaps they’re sick and tired of working for their master and may want to stand up for themselves. The party may use this to their advantage by disassembling an antagonist’s team by having the Dretches side with them. With this, the party can have their demon friends and rise through the ranks of the land.

Swarms of Dretches can be a great nuisance that you can bring your players as they explore the Abyss and the unknown. However, considering its relatively low ability score stats, it’s highly doubtful they are more than henchmen of a demonic overlord.

Though as a Dungeon Master, you still have plenty to work with as it can offer you opportunities to let loose in your roleplay. From being goofy and dumb to being obnoxious and threatening, there are ways for you to add flavor and life to this creature as you set up your encounter. So remember to have fun, and feel free to explore how you may implement this creature in your campaign!

How does the Dretch’s Fetid Cloud’s poison works?

In general, when a creature is poisoned, they have a disadvantage on Attack rolls and Ability checks. Also, one must consider the secondary effect of the Dretch’s poisoned condition, “the target can take either an action or a bonus action on its turn, not both, and can’t take reactions.” This means that at this expense, the player can only make one move per turn/

In which plane can Dretches be found?

Dretches are native to the Outer plane, Abyss. In the Great Wheel cosmology model, this would be located in the lower planes between Pandemonium and Carceri. In the Abyss, they are most commonly found the Abyss’ layer, Thanatos.