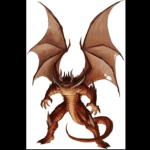 Some monsters, in DnD, get a little less love than others. Quasits in 5e are one of those beginner creatures that often get skipped over by DMs. That is a shame, and they are exquisite to add some flavor to a campaign and catch players off guard. For players, too, Quasits are cool to play as in a Homebrew.

If you want to know more about these underappreciated creatures, this is just your guide!

Contents hide
What are Quasits
DnD 5e Quasit stat block
Quasits have the immunities and attributes:
Quasit abilities
Actions
Using Quasits in 5e
As a dungeon master
As a player
Conclusion
DnD Quasit 5e FAQ
Can you have a Quasit 5e familiar?
What are the Quasit’s weight and size?
What is the difference between the Quasit and the imp?
Related Posts:

Quasits are a funky 5e DnD monster. The Quasit is an outsider from the Abyss typically found on the Material Plane. They are chaotic, evil in alignment, and are known to be sneaky and manipulative.

They are CR1, have at-will invisibility, and have myriad resistances that can make your life difficult. A Quasit is a small, sinister creature that has the power to assume various forms. They are most often messengers and spies for other, more potent demons and evil lords. They are usually not strong enough to fight independently, but they can use their plethora of valuable abilities to take advantage of others.

Their lifespan is another interesting feature. They are thought to be able to live indefinitely as long as they do not get killed. Due to this, these demons often hold very long grudges.

So what conclusions can we make seeing these stats?

Well, let’s start with some obvious weaknesses. First, the strength of this tiny demon is nothing to write home about. With a 5 (-3), this is a significant weakness. However, this shouldn’t be a problem as they are more rogue-like monsters.

The other weakness is more significant, in my opinion. This tiny fiend is dumb as rocks. Well, that is to say, they don’t have the intelligence of a beast, they are much more intelligent than, for example, a giant snake, but compared to a human, they have lots of trouble understanding orders and complex plans. That will be a significant problem if you want to employ these as servents of your antagonist demon lord or as a variant familiar.

So what about the strengths of the Quasit? Most of its strengths are the abilities you can read about below this chapter. However, stats-wise, one is extremely obvious. These are dexterous little creatures. Their dexterity is a significant asset to them. This nimbleness makes them extremely good at dodging things and will ensure they succeed in almost every dex save they do.

This dexterity, combined with their skill of +5 stealth, makes them perfect for sneaking around, gathering intelligence, or stealing small items. I have used these as scouts in my campaign and as a way to harass townspeople by stealing valuables like magical rings and coins to fund my evil plans.

In short, play to their strengths. Make them do sneaky things and don’t use them for head-to-head combat. As a dungeon master, if you do that, these will make your gameplay so much more fun.

Quasits have the immunities and attributes:

The devilish creature has two abilities that might cause your players – or your DM – a ton of trouble. However, if you are creative, these two can be combined to make them even more potent.

Shapechanging – The Quasit can shape change into three different forms besides its original. First, the bat form has a speed of 10ft walking and can fly at 40ft per round. Second, It can turn into a centipede, which can walk and climb 40 feet per round. Third, it is also possible to turn into a toad that can swim and walk at 40ft per round.

Magic resistance – This tiny fiend demon has an advantage on saving throws against spells and other magical effects. This ability is an excellent safeguard against spells like detection that might break the invisibility of the monster.

Claws – when in the beast form, it can use its claws. (+4 to hit, reach 5 ft., a single target. Hit: 5 (1d4 + 3) piercing damage, and the target must succeed on a DC 10). When the constitution saving throw fails, the target takes 2d4 poison damage and becomes poisoned for 1 minute.

Scare (1/Day) –  One creature of your choice (the Quasit) within 20 feet of you must succeed on a DC 10 Wisdom saving throw or be frightened for 1 minute.

Invisibility – the monster remains invisible until it attacks or uses its power to scare someone. For example, the Quasit usually stays hidden in the shadows while waiting for the right time to strike.

This creature thrives when the user is creative. Just taking a quick glance and what their abilities are will make any DM excited to throw these at your players.

As a dungeon master

A Quasit is a small, imp-like creature that occurs naturally in the world of DND. However, some evil-doers and demons have these fiends as their familiar. They are thus often summoned by a conjuration spell. A Quasit can cast a weak snare spell and use magic items while conjuration spells bind them. If a conjuration spell fails to hold a Quasit, it will often attack the caster if that caster is human or is weak.

If you are starting the campaign, the Quasit can be introduced when your players are around level 4. This encounter can be a one-off occurrence, where they get ambushed by one or are told about one of these critters running around town causing trouble.

My favorite way to use this monster in an encounter in DnD 5e is by having this fiendish creature stalk players. It is a perfect monster to keep taps on an up-and-coming group of adventurers if you are an evil demon lord who wants to know more about what is happening in the world.

They don’t draw much attention, and these imp-like demons are disposable assets.

If you want to play these as a player character, I strongly advise you to go with a rogue class. They can be an optimal choice for rogues thanks to their very high dexterity and abundance of valuable abilities for sneaky monsters.

Of course, you can also own a Quasit as a variant familiar. These can be tasked to do reconnaissance tasks thanks to their sneak skills and multiple shape-shifting forms. While they are not a significant asset in combat, they are perfect for infiltration and stealing useful items.

Keep in mind that their intelligence is relatively low so that complex plans won’t go off without a hitch. They also aren’t particularly strong or fast, so avoid using them in combat.

In our opinion, as experienced dungeon masters, the Quasit is a very underrated monster. The abilities and lore around it are versatile enough to fit them into just any campaign. You can use them as the spies of your main antagonist or as a one-off quest to slay one that is causing trouble around town.

Can you have a Quasit 5e familiar?

Yes, however, this is not a regular familiar that you can get with the find familiar spell. Instead, this is a variant familiar and can only be obtained through other methods. The most common one is taming one.

What are the Quasit’s weight and size?

What is the difference between the Quasit and the imp?

There are two significant differences between the imp and the Quasit. The first one is the choice forms of polymorphing. The Quasit can change into a bat, toad, or centipede. The imp can have two choice forms of a similar size. The other is that the imp can use a supernatural suggestion, while the latter one sends waves of terror.