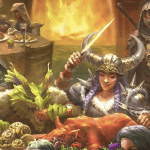 Wielding immense magical powers earned through years of study, wizards can serve many roles in a party and have almost unlimited growth potential.

They learn magic through different institutes and methods. Their backgrounds reflect their high intellect and how they were taught magic. These are some great background options listed from good-best:

Studying at prestigious institutes of magic is very expensive, and ordinary folk cannot afford such costs, but a noble could quickly enter themselves or their children into one of these institutes. Being a noble can explain how the wizard managed to enter the institute, be it through gold or political power. The noble background grants proficiency in history and persuasion skills.

History is already part of the wizard’s skill list and uses the wizard’s primary ability score. At the same time, persuasion is less useful, and many wizards are less charismatic due to the amount of time spent alone, deep in books. You also gain proficiency with a gaming set which is wasted on a wizard.

The noble’s equipment includes a set of fine clothes, a signet ring, a scroll of pedigree, and a purse with 25 gold coins. The equipment does not provide anything to the wizard, but the high gold count is advantageous at lower levels.

With the Position of Privilege feature, you are welcome in high society and gain help from common folk whenever possible. The noble background offers some decent proficiencies, a good feature, and simple backstory potential, but it is not outstanding.

Learning magic to better serve a god or pantheon can be the story of many wizards without needing to be clerics or paladins. The acolyte background grants proficiency in insight and religion skills. Religion is not greatly useful to most wizards, but to a religious one, it is beneficial, especially since it is an intelligence skill.

Insight is also part of the wizard’s skill list and is a much-needed proficiency no matter what kind of wizard you make. The two languages added by the background are nice but unnecessary since the wizard can cover most languages with magic. The acolyte’s equipment includes:

This equipment is primarily useless to the wizards, even religious ones, but it adds to the character for roleplay purposes. The Shelter of the Faithful feature of the acolyte can be instrumental in any class, especially on the wizard with their ability to magically communicate with creatures across vast distances.

The feature allows you to take Shelter or gain assistance from fellow supporters of your religion. This background provides some decent skill proficiencies and a great quality but mediocre equipment. It requires the character to be religious in some sense for it to be implemented well, restricting its use.

Most wizards learn to wield magic through the many magical institutes of the world. These institutes can be the faction under which you are the agent. The faction agent background grants proficiency in the insight skill and a chosen mental skill (Charisma, wisdom, and intelligence).

The insight skill proficiency is already excellent, and part of the wizard’s skill list, but the chosen mental skill proficiency allows for many choices. Since insight is not a unique, character-defining skill, the other available skill choices can depend on your wizard’s backstory and personality.

Along with these proficiencies, you learn two different languages and gain the faction agent’s equipment which includes a badge/emblem of the faction (or college/institute), a copy of seminal faction text, a set of everyday clothes, and 15 gold. You also gain the Safe Haven feature, which works like the acolyte’s Shelter of the Faithful feature. Those in your faction grant you help and Shelter.

This background’s proficiencies are some of the better ones among the backgrounds, but it does not offer much more than that except a decent feature that can be part of the character even without choosing this background.

A terrifying magical beast haunts you outside of your control that cannot be simply slain. You gain proficiency with two arcana, investigation, religion, or survival skills. Three of these skills are already part of the wizard’s skill list, and all of them capitalize on the wizard’s primary ability scores, intelligence, and wisdom. You also learn two exotic languages, which are rare and very useful.

Along with these great languages and proficiencies, you gain the background equipment, including a monster hunter’s pack, a trinket of significance to your character, a set of common clothes, and one silver coin. Aside from the lack of gold, the monster hunter’s pack included in the equipment is a fantastic and valuable addition to the wizard and the party as a whole.

The Heart of Darkness feature is also handy in many situations. Those who look into your eyes will be compelled to help you due to the pain and suffering you have undergone. Overall, this background is impressive in every regard except coin. You gain two choices of four proficiencies, two exotic languages, beneficial equipment, and a great feature. Besides the benefits, the background can be easily worked into most backstories without altering a character’s initial idea or theme.

Learning magic does not have to be done in an institute, nature can act as your teacher, and spending years as a hermit can help one learn and master magic. The hermit background grants proficiency in religion and medicine skills and the herbalism kit. These skills are already in the wizard’s skill list and use the wizard’s primary ability scores, making them potentially very useful.

The medicine skill proficiency is advantageous combined with the herbalism kit proficiency, making the wizard somewhat of the alchemist and healer of the party. Religion proficiency is not as practical as medicine but can still be used from time to time, and it capitalizes on the wizard’s primary ability score, intelligence.

You also gain one additional language and the hermit’s equipment, which includes a scroll case full of notes of your studies, a winter blanket, a set of common clothes, a herbalism kit, and five gold.

The Discovery feature is not beneficial to the wizard as it offers no clear benefits. However, you have uncovered a great truth about the world/universe through your time as a hermit. This feature can be used with the DM for intriguing advancements or twists in the game’s story.

The hermit background offers good skill proficiencies and exceptional herbalism kit proficiency, but the feature is very lackluster, taking away from its overall benefits.

Wizards have studied magic for years. What’s to say that part of their deep study was the lore of the world? The sage background grants proficiency in the arcana and history skills. Both knowledge skills work great with the high intelligence of the wizards, and both are on the wizard’s skill list.

Arcana is a standard skill proficiency for wizards, and history can be useful in many campaigns with deep lore. You also learn two new languages and gain the sage’s equipment which resembles the equipment of the scholar’s pack.

It includes a bottle of ink, a quill, a small knife, an unanswered question, a set of common clothes, and ten gold coins. This equipment is not great but can be a less useful alternative to the scholar’s pack, allowing you to choose the explorer’s pack, which is much more useful in general.

The feature Researcher of the sage background is greatly useful for wizards. The feature helps you find pieces of lore or information easier in libraries or wherever they can be found. The sage offers great proficiencies, equipment, and a good feature, making it an easy pick for most wizards, and it requires almost no effort to make it match the backstory of a wizard.

This background grants proficiency with the history skill and with a chosen skill of arcana, nature, and religion. All available skill proficiencies are intelligence skills, and all except nature are part of the wizard’s skill list.

The choice between skills is a great part of the background as it allows different types of wizards to gain benefits, unlike the sage. You also gain two extra languages of choice and the scholar’s equipment which is very similar to the sage’s equipment, scholar’s robes, a writing kit, a borrowed book of study, and ten gold coins.

As a cloistered scholar, you get the Library Access feature. As the name states, it grants nearly unrestricted access to most libraries without interviews or fees. The whole background’s benefits are perfect for the great masters of lore, the wizards.