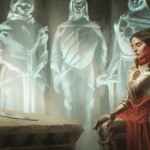 A fifth-level Cleric can give his whole party a quick burst of healing by speaking restorative words. This evocation spell ranges from 60 feet, healing up to 6 creatures.

As you call out words of restoration, up to six Creatures of your choice that you can see within range regain Hit Points equal to 1d4 + your Spellcasting ability modifier. This spell has no Effect on Undead or Constructs.

At Higher Levels: When you cast this spell using a spell slot of 4th Level or higher, the Healing increases by 1d4 for each slot level above 3rd.

The spell grants a small amount of healing compared to other healing spells, but it can target multiple creatures. This quality of the spell can give the party some quick healing, keeping them in the fight for an extra round which could turn the tables on the opponents.

It is not rare to have a player drop to 0 hit points halfway through combat while the rest are mostly healthy. Since the spell only requires a bonus action and has 60 feet of range, the Cleric could cast the spell from the back lines bringing the downed player back to the action and giving the allies some healing without needing to enter melee range.

While the spell has no clear qualities to help the party escape a bad situation or combat, its effective range and healing could prove useful. When players attempt to exit the melee range, they provoke an opportunity attack on them. The spell cannot avoid the opportunity attack but can indirectly avoid its damage by healing the player beforehand.

The regained health could completely mitigate an opportunity attack’s damage or at least lessen its impact. Using the spell at the right time can be detrimental to the party’s safe escape.

The spell Mass Healing Word grants a small amount of healing to 6 creatures up to 60 feet away. A creature at 0 hit points is unconscious and regains consciousness when it receives any number of hit points from healing sources or after 1d4 hours after succeeding on its death saving throws.

A Cleric with this spell at hand (or tongue) can bring back to consciousness up to six creatures avoiding death-saving throws altogether. Six-party members do not often fall unconscious, but having more than one down is not rare. In those cases, the spell will come in handy.

Mass Healing Word is a spell with many targets, meaning it would have much greater use in larger parties. For example, a party of 4 wouldn’t gain as much use from their Cleric learning the spell as a party of 6+ players. Using the spell with smaller sizes of parties is viable, but in most cases, it wastes its potential. The lower-level spell Healing Word could cover some of the uses for lower-sized parties.

While useful, Mass Healing Word provides a low amount of healing, especially for a level 5 party. Therefore, if and when a Cleric or another player learns this spell, it should be accompanied by another healing spell that provides more healing, such as Prayer of Healing or simply Cure Wounds.

Using a variety of healing spells will be the most optimal for the support member of the party, allowing them to provide quick and weak healing on a whim or grant great healing with time.

The nature of Mass Healing Word, cast with a bonus action and a large number of targets but low healing, shows that its primary use is not to heal but to provide a window of opportunity to the party.

Casting the spell to heal the party when not in danger should only be done as a last resort if no other options (rest, potions, or another spell) are available. The party will get the most use out of the spell when it is cast at the right time and communicated correctly.

Does Mass Healing Word work through walls and other structures?

Mass Healing Word description states that the target creatures must be within range and visible to the caster. Therefore, if a window or another see-through structure obscures the creature, it can be targeted for healing if it is within the spell’s range.

Can Mass Healing Word be used to heal the caster?

However, a 6th-level Cleric with the Life Domain can regain hit points whenever they heal another creature, even if the spell does not target the caster.

Can the number of targets of Mass Healing Word be increased?

Does Mass Healing Word work if cast with Subtle Spell?

While the spell has “Word” in its name and states, “As you call out words of restoration,” it does not specify the words required for the spell to work. Using the metamagic Subtle Spell removes the required components of the spell, meaning it can be cast without them. With Subtle Spell, the spell acts more as a pulse of healing rather than a restorative sound.