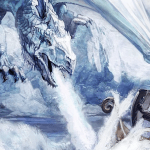 Within the realms of Dungeons and Dragons, some beings defy the standard existences of many creatures.

From the holy power of Celestials, the mischievous mannerisms of Fey, and the shambling corpses of Undead. Many of these beings can cause a great deal of physical and psychological damage to those within the ranks of the party.

As such, there do exist spells that assist with tracking down/identifying, attacking, and defending against such beings, with this one being one of great usefulness; Protection from Evil and Good.

What is Protection from Evil and Good 5e: mechanics and requirements

Protection from Evil and Good description

Until the spell ends, one willing creature you touch is protected against certain types of Creatures – Aberrations, Celestials, Elementals, fey, Fiends, and Undead.

The Protection grants several benefits. Creatures of those types have disadvantage on Attack rolls against the target. The target also can’t be Charmed, Frightened, or possessed by them.

If the target is already Charmed, Frightened, or possessed by such a creature, the target has advantage on any new saving throw against the relevant Effect.

For the types of creatures affected by this spell, any attacks they do against the willing creature selected for this spell are all rolled with a disadvantage. This gives the target, who would most likely be a player character, a higher chance of being missed by an enemy’s attack while under the spell’s effect.

As a side effect of this advantage, means the creature will most be focusing on a different creature that has not been selected to be a target for the creature. This side effect is mainly on the side of the Dungeon Master, depending on if they are the type of person who would instead focus on the undefended party members.

This is as opposed to trying their luck with the disadvantage roll they would have to make against a character under the protection of this spell.

When a creature is under the effects of this spell, they gain a buff to its capabilities, preventing the creatures targeted by the spell from being both charmed and frightened by whatever creature is attempting to do so (within the spell’s affected monster types).

This also prevents them from being possessed by the monster, allowing the creature under the protection of the spell to retain control of themselves in case the beast the party is fighting is capable of possessions. Finally, if the target is either charmed or frightened by one of these monsters before being placed under the protection against good and evil.

Then their next saving throw to break free of the condition is done with an advantage. Having this advantage allows the player to have an easier time ending the condition early, allowing them to return to their full fighting capabilities during a combat encounter, especially a particularly difficult one that the party could encounter.

As described in the Attributes Section of this article, there are two different physical materials; Holy Water or Powdered Silver and Iron. Depending on the Dungeon master’s interpretation, the Caster can use this spell by using either physical material for the spell’s casting costs.

This gives the player more chances to cast the spell as long as they have the spell slots required. However, there is a Downside to this. It is also dependent on the interpretation of the physical material requirements by the Dungeon Master. These will be discussed in the Disadvantages portion of this article.

This spell, as stated previously, only requires a 1st level spell slot to be used to cast the spell. Such a low level gives the player who wishes to cast the spell a decent number of times they can use the spell before running out of spell slots. This in turn gives more willing creatures a chance to benefit from the buffs this spell provides to them.

As stated in the Advantages and Attributes Sections, this spell can utilize one of two different physical materials to be able to cast the spell. Similarly to how the interpretation of the material requirements can allow for more chances to cast the spell, a Dungeon Master can interpret Protection from Evil and Good to not affect particular creatures depending on what was used as the physical material.

As an example, if a caster used Holy Water as the physical material , then the spell would be useless against Celestials, Fey, and certain Elementals; Using the powdered steel and iron would render the spell useless against Aberrations, Fiends, and other Elementals

Given how a good majority of the creatures that are countered to a certain degree with this spell are those that could be considered mighty magical beings, the monster could very quickly be too strong in a combat encounter to face any penalty from the spell’s effects.

In comparison, it is true that the creature would still be unable to charm or frighten the willing creature under the spell’s protection. It has to be said that the creature in question could have such a high modifier toward their attack rolls.

That was rolling at a disadvantage wouldn’t hinder their ability to hit the player character they wish to hit. Of course, such a high attack roll modifier would most likely be found on a tall CR creature that would be an enemy a high-level party would face.

With that in mind, the party would most likely have other skills that they could use to combat such an entity, thus avoiding this problem that would otherwise plague a low-to-mid-level party.

Best uses for Protection from Evil and Good 5e

Combat against Gods and Demon Lords

Since the spell is helpful against Celestials and Aberrations, the spell can be used during such fights against either Gods that the party could be combating as part of the plot or Demon Lords for the same reason.

Regardless of whether the spell is used in the Prime Material, the Nine Hells, or the Celestial Plane, it is still effective against them. Since many of these creatures can hit the players incredibly hard, forcing them to have a disadvantage on their attack rolls could make the fights just a little bit easier.

Similarly to how the spell can be used as described above, it can be used to combat Fey Creatures that could easily charm a member of the party to fight against their allies. Even if they are charmed by one of these creatures beforehand, the advantage given to the target ally gives them an easier chance to return to their senses and fight their enemy.

Clearing out the Undead Hordes

Although this seems like the use that seems the most boring and most accessible to understand why it can be helpful in this scenario. The occasional quest of clearing out undead creatures can have this spell see some usage since a Dungeon master can very quickly throw a large number of weaker undead creatures at a party.

Protection from Evil and Good 5e can help keep the party a little bit harder for them to hit, even though a Low-Level party will be given smaller numbers to handle.

Protection from Evil and Good 5e can still be used against more rigid, more dangerous undead foes such as Zombie Beholders, Vampires, or even a Lich. Furthermore, its capabilities do not stop being useful once the Caster has obtained higher-level spell slots, even when they reach level 20.

Overall, the Protection from Evil and Good is very useful against many different monster types within Dungeons and Dragons that could be used to attack a party.

Its given disadvantage on attack rolls, immunity to Charmed or Frightened, and assistance to those who already have it through advantage on the saving throw rolls needed to break out of the conditions are all benefits separately.

However, with the separate benefits all combined into a single, 1st Level spell that can be used frequently, the Protection from Evil and Good itself is highly useful during any point in a campaign, regardless of what level the player casting the spell is.

What is the Gold Value of the physical materials for Protection from Evil and Good?

The Value of the material required mainly depends on which material is being used. For the Holy Water, the Value is 25 Gold pieces per bottle.
As for the powdered iron and silver, the Dungeon master could easily take the normal Value of an ingot of both (5 Gold for both each, depending on the source used for the information.). You must combine them to count as the Gold Cost of the material.

Why is the Path of Devotion mentioned in the Classes part of Attributes of Protection from Evil and Good 5e?

This is because of a specific benefit that Paladins gain when reaching Level 15 in this Paladin Path. When they reach their 15th level in the class, the Paladin will always experience the effects of this spell no matter what, effectively acting as an infinite duration variant of the spell itself.

Does the Caster have to specify the benefit the target creature receives when casting Protection from Evil and Good 5e?

With the way the question is worded, the answer to this is a simple No. However, since the spell does not openly state that the Caster has to specify the effect being used, it is a most likely valid assumption to state that all three effects are taking place on the target creature.