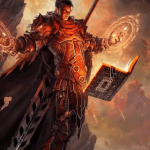 Walls; They are the most obvious requirement for any structure that needs to be considered an indoor structure.

With the many materials that exist to make any Wall, it should be no surprise that multiple spells are considered “Wall Spells”.

One such spell can defend an area through the same use as a standard wall, though with so much more strength to its very nature. And the best part? You can see through the Wall like a window, Presenting the Wall of Force Spell, the topic of this article.

What is Wall of Force 5e: mechanics and requirements

An Invisible wall of force springs into existence at a point you choose within range. The wall appears in any Orientation you choose, as a horizontal or vertical barrier or at an angle. It can be free floating or Resting on a solid surface. You can form it into a hemispherical dome or a Sphere with a radius of up to 10 feet, or you can shape a flat surface made up of ten 10-foot-by-10-foot panels.

Each panel must be contiguous with another panel. In any form, the wall is 1/4 inch thick. It lasts for the Duration. If the wall cuts through a creature’s space when it appears, the creature is pushed to one side of the wall (your choice which side).

Nothing can physically pass through the wall. It is immune to all damage and can’t be dispelled by Dispel Magic. A Disintegrate spell destroys the wall instantly, however. The wall also extends into the Ethereal Plane, blocking ethereal Travel through the wall.

When forming a defensive barrier, the most common question that will be asked about the barrier is how much punishment it can take before it is destroyed and rendered useless.

The Wall of Force is entirely immune to all forms of damage that can be inflicted, preventing anything from physically passing through it. In addition, the Wall can withstand a casting of Dispel Magic, though it instantly vanishes upon being attacked with the Disintegrate spell.

With the various means of damage inflicted upon a player character, having this spell be something that can defend from almost everything is incredibly useful in dangerous areas and situations.

An idea that an enemy force might have when being faced up against this spell would be to utilize Ethereal Travel to go through the Wall with magical means. However, the Wall and the area in which it is placed extends into the Ethereal Plane itself, preventing such a thing from being possible.

Now, of course, not many creatures can utilize Ethereal Travel. Still, when preparing a defensive fortification, one will hope that there is little to no way for an enemy to blast through the Wall or maneuver around it.

Only some uses of the Wall are as straightforward as simply placing it vertically in front of a doorway. However, some situations need to call for a defensive structure situated in a horizontal position or even at an angle, should the need arise.

Thankfully, the Wall of Force spell allows the Caster to set the Wall up in this manner, giving them more freedom when utilizing the spell and placing the invisible Wall down to defend a particular position from hostile forces.

This also extends to the shape of the Wall itself, as the Caster can either have it be a flat surface or they can form it into a sphere; They can even have it be a free-floating structure rather than having to rest it on the ground for the spell to be able to function.

The physical component for casting the spell, a pinch of powder made from a clear gemstone, can be considered a unique item to find in the world where the campaign is taking place. Such a unique nature of this item could make stockpiling the item for future castings more difficult.

In addition, it could limit the number of times the spell can be cast before the Caster runs out of materials to be able to use the spell. With the spell’s usefulness, such a limitation could cause people who do not wish to be bothered to hunt down the material. Ultimately deciding on a different spell to use instead of this one.

As a further extension of the first Disadvantage of the spell, the 5th Level Spell Slot could be seen by those who want to seek more combatively aggressive spells as one to pass by.

For others, this spell could be seen as a good pick to have in their spell slot, but they would soon find themselves unsure when they should use it and if they should use other 5th-level spells to help in a situation instead of Wall of Force, causing it to be unused by the player.

Since there is also no upcasting with this spell, the spell slot could be given to another spell that could see more usage from being upcast into higher spell slot levels for more power to the spell’s abilities.

As stated in the Advantages section of this article, The Wall of Force can handle most forms of damage that can be dealt to the Wall, save for one thing; Disintegrate. That’s correct; the Disintegrate spell will instantly destroy the Wall once it makes contact with it, providing itself with a major weakness that can be easily exploited.

Unfortunately, given how the Wall is invisible (use detect magic!), an enemy lucky enough to pull this off could also accidentally destroy the Wall without even realizing it’s there. This causes the Wall and the spell slot used to conjure it into existence to be a massive waste of materials and time.

As a defensive structure against hostile forces.

As per most uses of the Wall Spells, the Wall of Force can be used to defend a certain position, specifically blocking a doorway or large entryway that an enemy force is attempting to get through with the Wall.

Since it can be curved, it can also be used for any ranged combat characters, such as Rangers or other Spellcasters, to be able to stand on the top of the Wall and shoot at any enemies that happen to come within their Range and their line of sight. The Wall can even block an area as a Sphere or a Dome.

Thus the Wall of Force prevents those who are within an average level of intelligence from climbing up the Wall once they get a sense of the dimensions of the Wall itself.

A bridge to cross over a pitfall

Some of the ways this spell can be used are not just with the Wall being used as a barrier to defend against enemies and halt their progress in their tracks; It can also be used for traversing dangerous areas.

This is especially useful for those spellcasters who do not have Fabricate to be able to do this, though it is not recommended to waste the physical component and the spell slot for this use.

So it is recommended that this method of usage is ignored unless there is no other way for the party to get across or around a certain obstacle that could allow the Wall of Force spell to be used in this manner.

A very temporary means of travel

An even wilder and outside-of-the-box use for the spell is to be able to take the Wall, form a sphere around the Caster and/or the party members, and run in it, similar to a hamster ball.

This one is not recommended as getting a horse and carriage or even walking through the environment would be easier. Instead of using this spell and its required components and spell slot to have one’s character be a DnD Hamster for 10 minutes.

An artificial chokepoint for other spells/ranged attacks

To end this section where it started, the Wall can make chokepoints within an area for various uses after the fact.

This would eventually bottleneck them into walking directly into either spell effects that change the terrain into difficult terrain, magically created pitfalls or just other party members to remain at the other end of the Wall and attack as many of them that attempt to go through as possible.

Although a few strange uses were added to the previous section, the Wall of Force spell is useful in various ways extending past the ones mentioned in this article.

With its capability of being completely immune to most projectiles, and its freedom given to the Caster in regards to its position and shape when it is summoned.

Wall of Force 5e is one of the most useful of the Wall Spells that exist. I recommend getting this spell if you want a more defensive or supportive playstyle with whichever spellcaster class you choose for your character.

Will spells like Teleport be able to pass through the Wall of Force?

Due to the Teleport spell not requiring the Caster to make physical contact with anything between where they cast the spell and their desired destination, the answer to this question is Yes.

Can Wall of Force block the Banishment’s use as it extends into the Ethereal Plane?

This is dependent on the Dungeon master and their ruling for Wall of Force and Banishment, but one could argue that since other spells that require contact/interaction with the Ethereal Plane are blocked by the Wall, so is Banishment.

Could Counterspell dissipate the Wall of Force?

Although the Wall itself cannot be dissipated, the casting of the spell can, since the trigger for Counterspell is when the Caster sees another spellcaster casting a spel