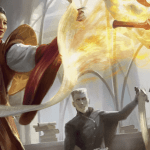 When playing as a wizard, it is easy to forget that there are other level 3 spells besides Fireball in 5e DnD. Unfortunately, sleet Storm 5e is one of the options you have that is often overlooked. Quite a shame, as this spell is a fantastic alternative and pretty underrated, in my opinion.

Our Sleet Storm 5e guide is based on our experiences using this spell in D&D and our countless hours brainstorming to make great (and fun!) characters. The guide primarily aims at beginners and players looking to spice up their characters.

Contents hide
Mechanics, pros, and cons
Useful info
Mechanics
Pros
Cons
Who can use Sleet Storm, and should they?
Best uses for Sleet Storm 5e
1. Nerf enemy rangers and melee users
2. Maximize your area of effect attacks
3. Protect from flyers
4. Make a distraction
What to take away
Sleet Storm 5e FAQs
How good is Sleet Storm in 5e?
Can you cast Sleet Storm indoors?
Is Sleet Storm 5e overpowered?
Related Posts:

* You need some dust and drops of water for your materials.

Until Sleet Storm ends, freezing rain and sleet fall in a 20-foot-tall cylinder with a 40-foot radius centered on a point you choose within range. The area is heavily obscured, and exposed flames in the area are doused.

The ground in the area is covered with slick ice, making it difficult terrain. When a creature enters the spell’s area for the first time on a turn or starts its turn there, it must make a Dexterity saving throw. On a failed DEX save, it falls prone.

If a creature starts its turn in the Area of Sleet Storm and is concentrating on a spell, the creature must make a successful Constitution saving throw against your spell save DC or lose concentration.

Great for potent teams: if you have a competent and well-cooperating team, then the Sleet Storm spell is fantastic to give your Frontliners an edge in battle and turn the tide of battle in an instant.

Great range: The range and area of the effect of a Sleet Storm are 150 feet in range and 40 feet in area. That is quite a lot and gives you ample opportunity to use it while fighting.

Needs materials: unfortunately, it is impossible to cast the spell without access to two materials. These materials are easy to come by, so it is not as large of a drawback as you might suspect.

Who can use Sleet Storm, and should they?

Sleet Storm is a pretty accessible spell, as many classes (and subclasses) get access to it rather quickly. For example, the Druid, Wizard, and Sorcerer have these spells on their default list, so they can get it at level 5. So, generally speaking, while it is definitely not the most potent level 3 magic, it is not a bad spell by a long shot and a good option for many builds.

There are a couple of interesting subclasses that also have access to Sleet Storm 5e:

Sleet Storm covers quite a large range and makes it so that the area it affects becomes 1. Heavily obscured, and 2. Harsh Terrain. When an opponent is inside the affected area, they have a major disadvantage when using range or melee. Next to that, their movement is also very much impeded. Combine this with Gust of Wind if you want to bring them to a standstill.

Using Sleet Storm in a fight is not just useful for a party that wants to fight on an equal footing but also for a group that wants to run away. Thanks to the combination of heavily obscured and hard terrain, you can get quite far before your enemy is out of the affected area.

2. Maximize your area of effect attacks

When you can get enemies in the area of the effect of Sleet Storm, you can easily deal massive damage to those with another area of attack spells like Moonbeam and Fireball. Because they are in Harsh terrain prone and heavily obscured, your attacks will deal massive damage, and you will have minimum difficulties defending yourself.

If you want to start a distraction that even a Faerie Dragon would be proud of, then using Sleet Storm is pretty great. You can cast the spell to obscure a random area and draw all attention toward it. Your enemies and bystanders will have their eyes glued to that area and wonder what exactly is happening there.

Meanwhile, you can sneak attack or go somewhere where your opponents don’t suspect you will be. This distraction works best during an intense battle.

What to take away

When deciding which spells to pick for your third slot, it is easy to be distracted by the options that deal outright damage. These are the most often discussed on forums, the most flashy, and a lot of fun. However, there is an argument that Sleet Storm is one of the best spells you can get if you are a creative player (or DM).

You would be surprised at how many instances you can use Sleet Storm greatly. From a roleplaying perspective, this magic has a lot of use too. In conclusion, while not an S-tier spell, Sleet Storm is amongst the better ones you can pick at level 5.

How good is Sleet Storm in 5e?

Sleet Storm is a decent spell that has a potent effect. It is best used as a support spell because it does not deal direct damage. However, when fighting strong enemies or large groups in a close space, the effect of Sleet Storm is extremely powerful and can easily change a battle in your favor.

Can you cast Sleet Storm indoors?

Yes, there is nothing in the spell description that says that the Sleet Storm spell can not be cast indoors. Thus, it is possible to use the spell in dungeons, castles, halls, etc.

Sleet Storm is a pretty well-balanced spell that is great in some situations but nearly useless in others. However, suppose you are fighting large groups of enemies and have access to a good area of effect magic and attacks. In that case, Sleet Storm is a magnificent addition to your spell arsenal without being too overpowered.