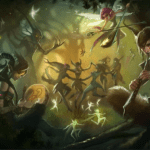 So, you have been leveling up your new Bard Character. If you want to get the most out of this build, you should know the contenders for best spells for magical secrets in 5e DnD. We have been going through all the possible options and evaluated them on a couple of criteria to see just how good these spells are for magical secrets in 5e DnD. These are the criteria we have used:

Let’s start with the list of best spells for magical secrets in 5e Dungeons and Dragons!

Remember that the ranking depends greatly on your build and the combat situations you find yourself in. So don’t blindly follow the list of best magical secrets in 5e for Bards but try to think about what your DM might send your way or what enemies you will have to battle in the future.

The fact that Sacred Flame can be upcast into higher levels is also a massive boost for this spell. Since the number of targets with resistance or immunity against radiant damage is negligible, this is an S-tier magical secret for bards in 5e!

Another fantastic evocation from the cleric list is Aura of Vitality. This concentration spell is a buff for your party that often comes in handy.

Aura of vitality works as follows: An Aura of Vitality radiates from you for a radius of 30 feet. The aura moves with you. You can use a bonus action to cause a creature (or yourself) to get healed for 2d6 hit points.

This buff is great due to the fact that it is a bonus action and can be used in almost every single fight.

Shadow of Moil is a magical secret coming from the Warlock spell list. Using this necromancy allows you to cover your body in a flame-like shadow, making yourself heavily obscured from other creatures. The dim light turns into darkness for a radius of 10 feet, and a bright light turns into the dim light.

You get resistance to radiant damage for the duration of the spell. Moreover, if a creature hits you within 10 feet of the shadows, you deal it 2d8 necrotic damage.

As far as magical secrets for Bards go in 5e, this is one of the best ones to protect yourself if you have a build that cannot take damage or fight on the frontlines very well.

The magical secret allows you to mask yourself and your companion for detection. Every creature within a radius of 30 feet has a +10 bonus to DEX (stealth) checks. They can only be tracked by magical means. That bonus is so good you can sneak an army of Ghouls into a city if you want.

This buff is one of the best spells to get away or sneak somewhere. If you are looking for more escape spells that are quite unconventional, checkout Create Bonfire and Cloud of Daggers 5e.

If you want to deal some damage as a Bard, then the Eldritch Blast spell is one of the most reliable Magical secrets in 5e to do so. The Eldritch blast shoots a dangerous energy beam up to 120 feet away toward a creature. The Eldritch blast only requires Verbal and Somatic components.

When the beam hits the target, it will take 1d10 of force damage. Since as good as nothing has a reliable immunity or resistance against force damage, you will almost hit high and reliable using this spell. Thanks to the long-range, you can stay in the backline of your party, deal damage, and buff too.

The Simulacrum is one of the most helpful illusion spells and an extremely strong magical secret spell for Bards in DnD. However, it does have the drawback that you must have a large amount of snow or ice and other (expensive) materials to use the spell.

Overall, Simulacrum is a decent illusion that allows you to get out of battle, distract opponents or have a tank to take hits you want to avoid at all costs. You can find the spell on the wizard list and read some more info about it on Roll20 or DnDBeyond.

Tip: check out our faerie dragon guide too if you want to have a new ally.

Misty Step is one of those spells one often sees on lists like this. While it is a very basic and easy-to-understand spell, it belongs on the list of best spells for magical secrets.

Misty Step surrounds you with a silvery mist and teleports you up to 30 feet to an unoccupied space. This fast and easy teleport is fantastic for dipping in and out of combat. The casting time is a bonus action, so it can be used in almost every situation without messing with your action economy.

Counterspell is a classic in DnD. You can use this abjuration instantly by spending a reaction and interrupting a creature using a spell. If that spell is level 3 or lower, that spell has no effect. If the spell is four or higher, you need to make an ability check using the spellcasting ability.

A bard mainly buffing party members will get a ton of use out of the Counterspell. First, you can easily nullify spells that are aimed at you or help your party avoid taking damage. There are a lot of spells that are level 3 and very useful for your enemy to have. Next, you can negate spells up to the 10th tier, potentially fight-changing.

Fly – like Misty Step – is another entry you often find on rankings like this, e.g. our best spells for wizards list. The fly spell is a fantastic transmutation that can be used in quite a lot of scenarios. First, you need to target a willing creature and use an action to give it a flying speed of 60 until the end of the spell.

Be aware that Fly is a concentration spell. When the concentration is broken, and the target of your spell is still in the air, it can fall from that height. Falling causes damage and can even force you to do a death-saving throw.

Hunger of Hadar is a spell on the Warlock spell list. It has a range of 150 feet and is a concentration conjuration that lasts up to 1 minute.

When you cast Hunger of Hadar, you open a gateway, and a 20-foot radius sphere of darkness appears. The void has noises that can be heard up to 30 feet away. No light can illuminate that darkness.

The void makes the difficult area terrain, and any creature that is in the area during the turn takes 2d6 cold damage. In addition, a creature that ends its turn in that area must make another Dex saving throw or take 2d6 of acid damage.

Thanks to the far range of the spell and the fact that you can mess with multiple targets simultaneously. This is a pretty good magical conjuration to use as a Bard and worth picking as a magical secret in 5e if you want to deal damage.

Both have their ups and downs in a fight. However, overall, both are very strong and useful in many situations. While many options are superior to this, Guardian of Nature is one of the most enjoyable to use as a Bard. Reading tip: our Specter 5e guide is another article dealing with underrated things like the Primal Beast or Great Tree.

Contingency is one of my favorite DnD spells of all time. Thanks to the versatile use and power, smart players can get a ton of use. The contingency spell combines a spell of level 5 or lower with a casting time of one action and can target you. When casting, you describe a certain circumstance or event.

When that circumstance or event finds place, the contingency spell is activated. Wondering how to use this spell? Check out our list of the best 14 uses for Contingency in 5e!

If you want to deal damage as a Bard, you have many options, thanks to the magical secrets you can get. Truthfully, this entry is mainly because I am a big fan of the Holy Weapon spell. You can use the holy weapon spell to buff your weapon or that of an ally.

The great thing is that you can cast this buff on every weapon. This doesn’t just include swords but also bolts and arrows. Moreover, the holy weapon buff only takes a bonus action and can last up to an hour.

There are a lot of great spells to pick for your magical secret as a Bard in 5e. Some like Fly and Misty Step will be great in as good as every situation, while some like Contingency are potent in specific scenarios.

Ultimately, it depends on your playing style and what your build wants to achieve. The most important things, however, when picking out magical secrets as a Bard is how useful they will be overall and if you will have fun using them!