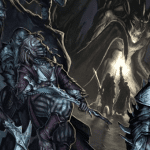 One of the best ways to boost your damage output is to choose an excellent weapon enchantment that is able to buff yourself and your allies’ DPR. However, you might be surprised to see just how many options you have when you are playing Pathfinders. New and experienced players alike often get confused and overwhelmed if they see all the possibilities. That is why we have decided to put together a list of the Best Weapon Enchantments Pathfinder has to offer!

The criteria we used are the following:

In Pathfinder, you can create weapon enchantments yourself, or you can find enchantments that can buff your favorite weapons. It is always favorable to pick an enchanted weapon, but we have a list below if you have to choose between various enchantments.

Just as the name suggests, with the shrinking weapon enchantment, you can turn your wield into a dagger of smaller size. The best thing about this enchantment is that you have the bonus of damage, around 1d4 points, and your weapon is concealed.

With the cruel weapon enchantment, you can make the creatures sickened by striking frightened, panicked, or shaken with your cruel weapon. This is only for a single round, and you can’t use it for multiple ones.

Using cruelty, you will get five hit points temporarily when you kill or knock unconscious creatures for ten minutes.

With the fortuitous weapon, you can gain more attack opportunities. However, as excellent as it sounds, you can use it only on your melee weapons, and it is available once per round.

When you hit the opponent with the fortuitous weapon and gain an attack of opportunity, there is another chance of getting a second opportunity, but with a penalty of -5.

If your main aim is to become a warrior, then there is nothing better than training. This weapon enchantment ability gives you one combat feat, but you must draw the weapon in return.

Mostly, this feat is for the weapon’s unique ability being used on the weapon, while you can’t use it as a prerequisite for other wielder functions or feats. Also, remember that you can’t change this feat in the weapon afterward.

It is a defensive weapon enchantment that allows you to dodge spells with your armor, making it more difficult for the enemies to attack you with their spells and abilities that resemble spells. This is great when your DM often sends powerful mages like necromancers your way.

It works because when the enemies use spells against you, it will push or pull you out of the spell’s way. Furthermore, you will also get a dodge bonus of +4 for summoned creature attacks, dodge, spell dodge, or abilities like spell dodge.

Transformative is a unique weapon enchantment ability only available for your melee weapon. Just like the name of this ability, the shape of a transformative weapon can be changed with the command of its owner or wielder.

You can change your weapon to any other melee weapon handedness or shape. Further, there are various categories like exotic, simple, and even martial.

To understand it better, we can take the example of a medium-long sword. You can change it into a medium single-handed weapon (melee) like a trident. The limitation here is that you can’t turn it into a tremendous double-handed sword or any other dual-handed melee weapon (medium).

The abilities of weapons change according to the transformation. So, for example, you can’t use keenness for slashing (weapons) on the bludgeoning (weapons).

Just like transformative, you can use unseen for your melee weapons only. You can find the functionality of this weapon enchantment ability from the name itself. Unseen can make the weapon invisible, including various accessories like a sheath or scabbard.

One thing to remember here is that the weapon doesn’t become entirely invisible; a close examination will reveal its presence. When the weapon is unseen, there is a penalty of -1 on the attack rolls, but that can be neglected with the feat of the blind fight.

The dexterity defender bonus is removed for armor class in the first unseen weapon attack. This is available only when the other can’t see the invisible object, hasn’t had a blind fight, or has the unseen weapon awareness.

There is a lot of controversy around the gray flame and how good (or bad) it si, but it’s real equipment point is its boosted physical damage. It doesn’t mean that this weapon enchantment is useless. Using swift action to channel energy can give your weapon a strange gray flame.

When gray flames ignite, your weapon will have a +1 enhancement bonus, providing your weapon with a further damage boost of +1d6 and dealing divine flame strike power to the enemies.

The flames aren’t permanent; instead, they last for around 1 round after you deal around d6 damage, or another way is through channeling healing.

The color of flames changes depending on their features; they turn silver gray when charged with positive energy, and the weapon counts as silver to pass the damage reduction.

Upon negative energy, the weapon has the color of ash gray and then is determined as cold iron, bypassing the damage reduction.

There is nothing too complex about merciful, as your weapon has bonus damage of around 1d6 points. The crazy thing here is that the bonus damage is nonlethal. Pretty fun to use on a Monk from a role playing perspective.

Using merciful, you can suppress and resume the ability of the weapon, then deal lethal damage without the bonus.

Driving is an exclusive ranged weapon enchantment. This will allow you to do a bull rush in the first range increment. It also has trip combat maneuvers, but bull rush success doesn’t come with the limitation of pushing the target 5 feet further.

On the other hand, the trip has a limitation of 10; when you fail by that number, you make the attacker knock prone.

After using the ammunition or weapon, the attack is impaired by liquids, gaseous factors, wind, and water. The more straightforward explanation is that your ranged weapon or ammunition cuts through these mentioned things.

Dueling is a unique weapon’s enchantment that you are bound to only use on the melee weapon. The dueling weapon is the one you need to use with the feat of weapon finesse, providing you with an enchantment bonus of +4 on the initiative checks.

But, you must ensure that your weapon is in your hand after drawing at the time of initiative check. For the check of disarming and feint, you get a bonus of +2. This same bonus is for the disarm resist and against wielder faint.

Sharding is a weapon enchantment that you can use only on the weapons thrown and melee weapons. You can convert your melee attack into a ranged special attack.

Doing this is tricky because you will have to take the throwing motion at the time of release. Then, a duplicate is thrown at the target, having 10 feet of bonus, similar proficiency, and the same weapon.

Furious is a melee weapon exclusive enchantment that focuses on the wielder’s anger. On the rage or under spells associated with rage, there is a bonus enchantment of around +2.

It is a versatile weapon enchantment that can be used against extra-dimensional beings. In return, you can pass through their resistance and physically harm them. When you use this ability to attack the outsiders, there is a five-point ignore on their reduction to damage.

It is a dangerous weapon enchantment that turns your weapon into a flaming weapon, giving fire damage and critical damage to enemies. Unfortunately, there isn’t a saving throw for enemies to avoid the fire, but there is still a choice of saving each round to cancel the flame.

Remember that it is an active ability; you must put the flaming ability on to set fire to enemies.

Glorious is an exquisite weapon enchantment only for melee weapons that allows your weapon to glow and have visible lights when you draw it. The bad thing here is that you can’t hide the light, but you can suppress it for some time through the daylight suppressing effects.

For example, if the weapon has a multiplier of x4, two rounds are added to that effect, and it goes further with the same strategy.

Check out these two guides if you have enjoyed the best weapon enchantments in the pathfinder article: