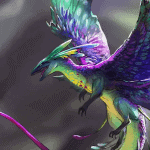 There are so many exciting monsters in DnD 5e. It can be hard to decide what monster you will throw at your players or how you can fight your DMs weird encounters. Today, we are discussing the Faerie Dragon 5e. This little dragon is about the size of a cat, but you should not underestimate it, even more so if they are Violet!

In this Faerie Dragon 5e guide, we are discussing the stats, possible encounter scenarios, lore, and strategies on how to fight them. So, without further chatting, let’s look at how the Faerie Dragon works in D&D!

What are Faerie Dragons?

These tiny dragons are very similar in size to the Pseudodragon familiars you might have encountered or even tamed during your campaign. However, despite their similar size, the Faerie Dragons are a much stronger monster that boasts many spells to rely on in combat.

The tiny dragon generally is friendly toward adventurers and visitors in their habitat. However, they will not hesitate to defend their home and allies when in danger. The older the Faerie Dragon, the more spells it has access to in battle. You can determine their age by their color. The youngest variants are a bright red color, while the oldest is Violet.

Faerie Dragons are Chaotic good monsters of the dragon race and are tiny-sized.

As you see, there are a couple of stats that pop. Let’s start with the weakness of Faerie Dragons. Their Strength stat is abysmal. If they have to do an STR check for anything at all, they will usually fail dramatically. So if you have spells or attacks that force a Strength saving throw, it is straightforward to hit them or cause the effect you want.

All their other stats are pretty decent. However, there is an amazing one. Their Dexterity is 20, and they have a +5 modifier. This dex stat makes them agile and dangerous to fight against if you are low level. If they have to make some kind of a Dex saving throw, you will almost always miss the attack at low levels.

As the dragon ages, it changes color. With those changes come new spells. However, they can still use the previous spells from the color before they change. So you might want to avoid fighting Violet Faerie Dragons as they can use spells like hallucinatory terrain and polymorph.

The standard melee attack of the faerie dragon is Bite. This Bite is a melee Weapon Attack with +7 to hit and a reach of 5 ft., one creature. However, when it hits, it does a meager 1 piercing damage.

One of the special attacks of the faerie dragon is the Euphoria Breath (Recharge 5-6). The dragon exhales a puff of euphoria gas at one creature within 5 feet of it.

When a Euphoria Breath attack is targeted, the target must succeed on a DC 11 Wisdom saving throw. If the target fails the WIS saving throw, it can’t take reactions for a minute and must roll a d6 at the start of each turn to determine its behavior.

How and where do they live

Faerie dragons are creatures that live in the fey wild, far away from busy settlements. They prefer to live in woods and nest in the holes of old trees where they mate and sleep. Since these beasts enjoy water and love swimming, they are often found nearby creeks and small calm rivers.

While they are good-natured, they enjoy messing around and playing pranks on creatures that wander into their domain. Mostly they mean no harm and are just looking for a way to entertain themselves. They often use their spells – like polymorph – for their pranks.

Bringing sweet fruits, pies, or honey is a good idea if you want to befriend a Faerie dragon. They will appreciate the gift a lot. Younger Faerie dragons that are still bright red might even follow you around and help you out as long as you keep the treats coming. They are good-natured, so you won’t need animal Friendship to convince them you don’t mean them harm if you really do not.

Faerie dragons are best known for their pranks. However, you can do many funny things to your players, thanks to their stealth, darkvision, and small size. A couple of ideas are:

Make sure to keep the pranks light, as the creatures still have a good nature.

Give them a fun Faerie Dragon familiar for a short time

If your players are familiar with these creatures, they might give them a bit of fruit or even a piece of fruit pie. If they do, you might want to have one of the younger faerie dragons follow them around and help them with small things like warning them when enemies are approaching or stealing things from other NPCs. Don’t forget that these creatures are smart but do not speak common.

Trap them into pissing off a nest

The fact that Faerie Dragons can communicate telepathically can have disastrous effects on your players if they manage to piss off a full nest of them. If they do, you might want to mess with them by having the dragons pull major pranks on them or use all kinds of magic.

Faerie Dragons make a fun encounter for your players. While this monster isn’t a combat encounter, you can still mess with your party quite a bit. You can pull pranks on them, have them harass your players, and punish them harshly if they attack these monsters.

You don’t need a lot of creativity to find a use for these monsters. You can get a lot of fun out of prankster creatures like these. However, if you are a DM, I would advise you not to use these in combat. While they have decent stats, their ability to do damage is lacking.

If you are a player, make sure you keep critters as your ally. For example, Faerie dragon familiars or allies are useful as they are smart, creative, and have a ton of interesting spells that might help you out.

Can you have a Faerie Dragon Familiar in 5e?

How large is a Faerie Dragon in 5e DnD?

What loot is on a Faerie Dragon?

The loot on a Faerie Dragon depends on what your DM wants to give you. Usually, these creatures don’t have anything on them, but for items they just snatched. However, their nest in the trees might have some loot (like rings, small weapons, coins) they stole as a prank.