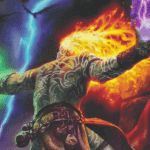 There are so many spells in DnD that it is hard to keep count. Some are amazing, some bad, and others are just bang average. Unfortunately, Elemental Weapon 5e is one of those okay spells nobody ever thinks about. Today, we will look at whether that mediocrity status is deserved or if there are some practical applications that people might not have thought about.

This Elemental Weapon guide will talk about the best uses of this transmutation spell and answer any questions you might have about the rules and upcasting.

What is Elemental Weapon 5e, and how does it work

When you say the magic words and make the hand gestures needed, the nonmagical weapon you touch becomes a magic weapon.

You can choose one of the following damage types that imbue the weapon:

For the duration of the spell ( up to 1 hour, concentration), the weapon has +1 on attack rolls, and it hits an extra 1d4 of damage when it hits.

Lots of damage options: You get a few advantageous damage options that help you skirt the immunities of opposing creatures. For example, fighting a trollu can use fire or acid damage.

No materials needed: besides a weapon to imbue, you do not need to have any materials to use the spell. This factor always makes it to the advantage of a spell. Check out our Verbal only spells article if you want to use only speech to cast magic.

Arm allies and minions: nobody says you have to use the weapon. You can arm a skeleton or an ally with this weapon to boost damage. It is also a fun option for NPCs like the cult fanatic to give it a big damage-dealing buff.

3rd spell slot is too much: a level 3 slot is a bit too much for a transmutation like that. So likely, it isn’t a good idea to pick this spell as there are many better options for you.

Not powerful enough: unless you upcast the Elemental Weapon 5e, it is not a very powerful option for you to use in a fight. While not many players are going for the most damage output on their character, even then this weapon is rather underwhelming.

Sometimes a creature has immunity against regular weapons, or you want a nice buff to your weapon to make sure you deal significant blows to your foe. The Elemental Weapon transmutation is a helpful spell to make your weapons a bit stronger and make sure they pack a punch.

You can also upcast the transmutation to a higher slot to strengthen the weapons. This buff can come in quite handy when you are fighting against lower level monsters with a resistance to regular weapons and you don’t have access to good magic weapons yet.

If you do have magical weapons already, or a way to get around that kind of immunity, then the Elemental Weapon spell won’t be of much use here.

2. Get around resistances and immunities

There are a ton of monsters that have immunities and resistances against a regular weapon. However, there are also a ton of creatures that have weaknesses in certain elements too. So having a powerful Elemental Weapon might be just what you need to strike through the defenses of a creature and make them mince meat.

The most fun use is when you are fighting a monster that has a ton of immunities or a potent opponent that you want to deal as much damage to in a turn. For example, if you want to get around the immunities of a conjured elemental, then having an Elemental Weapon is useful.

Are your minions using rusty swords and dull daggers? Give them an upgrade! By giving them a weapon imbued with magic, they might transform themselves into something better than cannon fodder and a distraction.

Of course, your allies can also use the magical weapon you imbue. So if you want to help them out, this spell might be a useful transmutation to consider.

Dungeon Masters, nothing stops you from homebrewing your encounters a bit and giving them Elemental Weapon 5e for themselves or their followers.

There is a lot of level 3 spells that are vastly superior to Elemental Weapon. So while it is not a bad transmutation, all things considered, there is little reason to pick this magic due to the many better options you have.

If you are not building a character that strives to do the optimal DPS and is maximized for most situations, then it can be a fun transmutation to consider. For Dungeon Masters, an Elemental Weapon is a good spell to give to monsters like liches and cult leaders if you want to give them a small buff. They do not have to use these weapons themselves but can give them to their minions to make them more potent foes.

Interested in other DnD 5e weapon-related guides? Here are some interesting ones!

What 5e class can cast an Elemental Weapon?

There are four different classes in 5e DnD that can learn and cast Elemental Weapon. These are Artificer, Druid, Paladin, and Ranger.

The Elemental Weapon 5e transmutation spells are mediocre. There are much better spells you can pick for your third slot. For DMs, Elemental Weapon is decent if you add it to monsters to give them a slight buff but without making them overpowered.