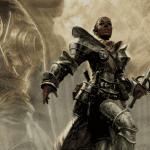 Time to rinse the world of evil. Today we are checking out Holy Weapon in 5e Dungeons and Dragons. This buff to your damage output is powerful, easy to use, and fun to fight with as a Paladin or Cleric.

In this article, we are going to go in-depth on how to use Holy Weapon to its full potential and answer some questions you might have about using it in a campaign. First, of course, we look at both DnD players and DMs.

Contents hide
Holy Weapon 5e
Spell description
Best uses for Holy Weapon 5e
1. Buff your allies
2. Make a Swords Bard or a Valor Bard
3. Power up your long-range capabilities
4. Vanquish evil with your Cleric and Paladin
5. A powerful torch of beacon of light
Holy Weapon FAQ
Can you twin holy weapon?
Do monk’s fists count for the holy weapon?
Can you cast a holy weapon on a ranged weapon?
Advice and final thoughts
Related Posts:

Source: Xanathar’s Guide to Everything, the official DnD source by Wizards of the Coast.

The spell has two massive advantages. First of all, Holy Weapon can be cast as a bonus action, so you can still attack the same turn. Second of all, this spell does not require a material component. You just need a weapon, so Holy Weapon is free to use and can be used as long as you can make audible noises and move your hands to fulfill the V and S requirements.

The disadvantage of Holy Weapon 5e is that you have to concentrate, or it will be dispelled.

In your turn, as a bonus action, you can stop the effect of the holy weapon and fire a burst of radiance. When you do this, target as many creatures as you want within a range of 30 feet. These creatures must make a Con Saving throw.

The odds are pretty high that you have a couple of allies that are using weapons. If you cast Holy Weapon as a bonus action on their weapon, they will get a 2d8 extra radiant damage every time they attack. This buff can be mighty when the player you are buffing can make multiple attacks per turn.

As a DM, you can also buff your minions. Imagine a hoard of Helmed Horrors with magical weapons imbued with this powerful magic.

2. Make a Swords Bard or a Valor Bard

A sword or Valor bard is another great class that can use Holy Weapon due to the fact they have an extra attack. Combine your Sword and Valor beard with the Crossbow expert feat, so you get three attacks per turn.

To get Holy Weapon on a bard, you must pick it as a magical secret at level 10. That way, you can use it to buff your three attacks with 2d8 radiant damage each. However, Destructive Wave on a Bard might be just as valuable, if not even more powerful.

3. Power up your long-range capabilities

A lot of players underestimate the power of an excellent long-range sneak attack. If you have a party member in your band of adventurers with a long-range attack, you can help him snip a bit with this spell. All you need to do is expend your bonus action, and you will add an average of 8 radiant damage to every attack.

4. Vanquish evil with your Cleric and Paladin

Your Cleric and Paladin can benefit quite a bit from having this spell if you have multiple attacks or need to deal extra damage. Since Holy Weapon 5e only uses a bonus action, you can still use your primary attack after casting this enchantment.

5. A powerful torch of beacon of light

Similar to Beacon of Hope 5e, the effects of the Holy weapon include radiating a light. You can use the weapon as a kind of landmark or as a way to illuminate a room. The 30 feet radius of bright light and additional 30 feet of dim light should not be underestimated. Fiendish Quasits and stealthy Crag Cats will have a more challenging time sneaking up on you!

Can you twin holy weapon?

No, it is not possible to twin holy weapons. But, of course, your DM can make an exception, or you can use Wish to make it possible anyway.

Do monk’s fists count for the holy weapon?

Can you cast a holy weapon on a ranged weapon?

You can cast Holy Weapon 5e on every weapon in Dungeons and Dragons. That includes weapons like spears, arrows, crossbow bolts, or even stones. This extra buff of damage can add up if you have additional attacks per turn due to the crossbow expert feat and if the monster you are attacking is slow and far away.

There are quite a few uses for the Holy Weapon spell in 5e DnD. As a DnD veteran, I am inclined to say that it is worth picking if you are not going for an optimal build for a Cleric or Paladin. However, the fact that it costs a level 5 spell slot and is a concentration spell are both pretty significant disadvantages.

However, you do not need any materials to cast it, and when you cast it, it only costs a bonus action. Thanks to those two facts, the magic is cheap and convenient to use whenever you want.

I think that Holy weapon is best used as either a buff for your allies’ weapons if they have multiple turns to attack. Another fantastic scenario where this enchantment is when you want to deal long-range chip damage to a strong enemy or group of weaker foes.