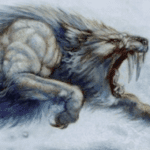 It has been a while, but today I am going to take another deep dive into the extensive Bestiary of DnD. The monster I am going to talk about today is the Crag Cat. This is a lesser-known monster that does not get a lot of love from what I see. Let’s change this! So what is a Crag Cat 5e?

In 5e DnD a Crag Cat is a grey and white monstrosity (formerly a Large Beast) that has an Armour Class of 13 and 34 Hit Points. It is a beginner monster since it only has a challenge rating of 1. The Crag Cat gives 200 XP when you manage to defeat it.

Those are the cliff notes. However, this guide is going to go quite detailed into the stats, how to use a Crag cat as an encounter as a DM, and a word or two about having the creature as a familiar or Wild Shaping into it!

This guide is aimed at beginners and people looking for some inspiration for their next DnD 5e campaign. If you are interested in cool (beginner) monsters to throw at your players, I have written a Giant Poisonous Snake 5e guide.

This part goes quite in-depth about the Crag Cat stats. If you already played a DnD campaign or two, most of this info is going to be a reminder at most. At the bottom of this chapter, you can find an easy-to-read stat block.

Armour Class: The armour Class or AC of this creature is 13. That is quite high for a beginner monster, so don’t use this at the very start of a campaign. Even when your players can ‘safe spot’ this monster, they won’t be able to kill it off very fast.

Speed: Surprisingly, the Crag Cat is not very fast. It ‘only’ has a speed of 40 feet. That is above average, but not as much as you would expect from a feline.

If we look at this table that displays the stats of a Crag Cat, we can see some obvious strengths and weaknesses to this monster. Let’s start with the Strength, literally in this case.

The creature has a 16(+3) in strength, a 17 (+3) dexterity stat, and a constitution of 16 (+3). Those are some pretty strong stats from a pure combat perspective. This monster is going to be able to hit, and it is going to hit hard. The natural armour has also made it very survivable. Its best stat, Dexterity, will protect it from long-range attacks like Ice Knife.

However, the Crag Cat also has one very glaring weakness. Its intelligence is only 4 (-3). The thing is, there just aren’t a lot of spells or attacks that force a monster to do an INT saving throw. Psionic attacks for mystics are an exception to that, but the odds you have one in your party are rather slim. You might be able to contract one by using the Planar Ally spell if you have access to it.

The Crag Cat is built for stealth and ambushing. That becomes very clear if you take a quick glance at the skills and senses of this creature.

In short, this is the perfect animal to surprise your players.

Pounce: The pounce ability gives the Crag Cat a nice joker. If it is able to move in a straight line for at least 20 feet, and then hits a creature or player with a claw attack, that target needs to do a DC 13 Strength saving throw. If the target fails the throw, the Cat can attack twice with a bite and a claw.

Nondetection: If this monster wasn’t stealthy enough already, it is also untargetable and undetectable by divination magic or a scrying sensor.

Spell Turning: The most interesting ability of this creature in my opinion is the fact that it has an advantage on saving throws against any spell that targets just the cat. If the crag cat can do a successful saving throw AND the spell is level 7 or below, the cat is not affected by the spell and the spell targets the caster! So if you shoot a Magic Stone at this monster from a distance thinking to chip it down, you might get hit with your own magic!

The abilities of this monster are a nightmare for spellcasters. Even more so if they are not paying attention and are not doing their perception checks.  So if your players are relying very heavily on magic, it might not be the best idea to send this monster their way at the beginning of the campaign.

The actions are pretty obvious. They have a Claw attack that is melee-based and does slashing damage. The creature also has a Bite Melee Weapon Attack which does piercing damage. The Claw is +5 to hit, and has a reach of 5ft. And hits 7. The Bite does the same with the exception that this hits 8. Both are for one target only.

My favourite use for this monster is to sneak and ambush my players. If they are walking around in a forest or next to a field with tall grass or even wheat, odds are this monster is lurking somewhere. The Stealth +7 and the darkvision of 60 feet just make it perfect for an ambush at night when there is only a faint glimpse of moonlight. If they are not aware of the spell turning ability, and they shoot a spell such as Agonizing Blast towards the monster, they are going to be in a whole lot of trouble. No wonder these are also known as the hunters of men.

If you do not want to attack your players but give them a powerful ally, this is a great option. However, you do need to look out for this. If there is a Druid in the group, you might all of a sudden have two of them in the party if that druid has access to Wild Shape. The second thing to look out for is that you do not put your evil wizards and other spell casters at a major disadvantage due to the cat’s spell-turning ability.

The Crag Cat makes an excellent scout. However, there is one little problem with using them as a scout. They do not know any language, not passive and not active, which is not very helpful for communication. If you have access to the Encode Thought spell, this might not be a problem. However, you will need to ask your DM if you can use the spell in this way.

How big is a Crag Cat?

An Adult creature is about 3 to 3.5 feet tall. The length of the adult crag cat is 8 feet long, including the tail. These creatures weigh about as much as an adult man. They are between 135 and 190 pounds. This makes them the ideal size for sneaking and ambush attacks.

Can you Wild Shape Crag Cat in 5e

Wild shaping into a Crag Cat is possible in 5e. To be able to do this, you will need to be a Moon Druid. If you have a CIrcle of the Moon druid you can Wildshape into this monster at level two. Remember, that you must have seen this monster at least once to use the shape. A lot of DM’s place restrictions on this, since it is an extremely strong Wild Shape.

What is the Storm King’s Thunder Crag Cat