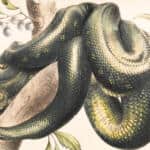 Do you have your antidote ready before going into the forest? I bet not! Fellow Dungeon Masters, if you want to have a pretty unique encounter for your party, here is one I love to use and have never seen used in another campaign. The giant poisonous snake in 5e DnD is underrated, unexpected and a fun monster to use as a DM. And yes Reddit, I am aware that the actual name should be the giant venomous snake in 5e, since it bites.

Players, I am sure you are going to love fighting this monster too if you are sick of fighting kobolds, goblins and so on in the beginning of the campaign. This poisonous snake has a ¼ challenge rating. Perfect for a campaign that starts light on the magic

In this guide, I am going to share my experience with this monster as a DM and as a player and tell you all the tips and tricks I have to make the most use of this creature in a 5e campaign.

These large snakes come in the same colours as their environment. They can be brownish, green or black. They are masters at ambushing their prey. Their poison damage is massive. They can deal 10 (3d6) poison damage if you fail a throw, half if you succeed.

They come in many variants. You have giant cobras in 5e, regular snakes that are poisonous, and so on. They should not be confused with the constrictor snake, which gives very tight hugs and does not bite.

They are found in places where they can easily hide. The jungle and large bodies of water are their favorite habitats to hang out.

As I said at the start of this guide, this is a beginner monster. So don’t expect this poisonous noodle to give a party of adventurers of level 5 or more any trouble whatsoever. If you want your level 5 adventurers to have somewhat more of challenge, you should look at the Giant Toad as a swamp and jungle encounter in 5e.

This is the giant poisonous snake stat block:

Since this is a beginner monster, I think it is pretty useful to go in-depth and discuss these stats one by one. I am also going to give a bit of insight in how to fight the monster. However, if you are already experienced with Dungeons and Dragons, you will already be familiar with the terms discussed here.

AC: The Armour Class of the creature is 14, which is in line with most lower-tier monsters. The natural armour this snake has is low, so it will be quite easy to hit. That is why I recommend you to not use this monster after your party members

Hit Points: The giant poisonous snake is a beginner monster, so it only has 11 hit points. That means if you fight them as a group, a single snake won’t pose a real problem. That is why I suggest you throw them at your players in small groups of 3 to 5. This will pose much more of a challenge.

Speed: These creatures have a regular speed. They can only go 30 feet on the ground per movement, just like most other NPCs in, D&D. However, they can also swim!  The speed they swim at is also 30 feet per turn.

So if you have a villain that is able to cast Wall of Water, he can have it filled with giant poisonous snakes. Check out the part on uses for some more DM inspiration!

Skills: The Giant Poisonous Snake has a Perception +2. Perception makes you notice certain things, like traps, things that are slightly off, objects that have been hidden, or a group of adventurers swimming in an open lake.

Senses: They also have a blindsight of 10 feet. This means they are able to 10 feet into the dark without relying on their eyes. They do this with their tongue and are able to make out figures just as well as you would in regular daylight.

CR: The CR stands for challenge rating. They have a ¼ rating, so that is clearly at the beginner level. You will get 50 experience points for defeating one of them.

The Giant Poisonous Snake bites to spread its poison. So a more apt name would have been venomous, so if you want to have a more accurate DnD campaign that takes into account the terminology used in Biology, change the name!

Should you change the size?

I think it is a good idea to do so. The size of the Giant Poisonous Snake is not huge, but medium. A medium creature only commands 5ft x 5ft in area. I know this has little to do with how big it actually is in the game, but I still think it is a bit out of place.

To be honest, I don’t agree with this, so I change this in my campaigns. I make sure the snake is at least 10 metres (or 30 feet) long, and about a half to three fourth of a foot wide. The weight of these snakes in my d&d campaign is about 150 pounds. So, they are not as heavy as you might think they are.

This makes it an actually giant snake, and not a medium beast. Of course, this is just my personal preference, and if you like to stick to the rules that is fine too!

How to use the monster in your campaign

The giant poisonous snake isn’t a monster you see in a lot of d&d 5e campaigns. It isn’t a real fantasy monster, so I suspect that is why a lot of DMs just skip it and go for other creatures that aren’t as rooted in real-world animals. However, from a storytelling perspective, poisonous snakes can be quite a lot of fun. If you would like a change of scenery from mediaeval Europe for your DnD campaign, these are great! You are going to have a tonne of fun with them in combination with other monsters in a jungle setting if you are Dungeon Master.

1. Sneak attacks in lakes and rivers

If you have ever gone swimming in nature, you know that a lake or a river is very blurry and seeing further than half a feet deep is as good as impossible. This gives you as a DM some amazing opportunities for sneak attacks!

If you want to make a point to your players that they need to be careful in your world, have them traverse a river or a lake. The Giant Poisonous Snake in 5e has two aspects that make it great for ambushes in the water.

First, it has 10 feet blindsight. This is about 3 metres, so perfect for medium-deep and shallow bodies of water. They will see anyone who is trying to swim to the other side, without being spotted.

Second, they can swim in the water just as fast as they can move on land. They can swim at 30 feet per movement turn, which is very good. This makes them perfect for sneak attacks when they are close by, even if the river or lake isn’t very broad.

How many of your campaigns have taken place in the jungle? Not many, I suppose. That is quite a shame, since I love using this unusual setting to spice things up. You can take your inspiration from lost civilizations like the Incas, where entire cities were reconquered by nature.

Jungles are a lot darker than you would think. Due to the cantaloupe, trees, and leaves, a lot of the sunlight is blocked out. So a creature that is able to see in the dark is going to be a great option for DMs to throw at your players at the start of the campaign. Another great monster for Jungles and sneaking is the Crag Cat.

One little side note, nowhere does it say that these snakes can climb in 5e. So theoretically they wouldn’t be able to climb the trees very well. However, I just add this to their speed and give them a climbing speed of 15 feet per movement turn when they are climbing trees. Feel free to do the same in your Pathfinder or D&D campaigns!

3. Have a giant poisonous snake companion or pet

If you are a halfling who wants a giant poisonous snake pet in d&d, bring it up with your DM! They are not overpowered at all, and are a pretty cool pet to have. They don’t give the player a lot of benefits. Dungeon Masters with a bit of creativity can likely see the drawbacks a pet as this brings. So, don’t shoot your player’s 5e beastmaster suggestions down right away, always try to think how to flip it around and make them regret their ‘clever’ ideas.

Do you know what everyone hates? Getting thrown in a pit filled with giant poisonous snakes. Since individually they are pretty weak, using them in a group can give your players somewhat of a challenge after levels 1 and 2.

You can combine these fighting pits with other monsters too. However, be smart about it. Snakes need to eat, get hungry and get bored. So adding living creatures to it, won’t end well. You can add an army of undead creatures to it that the snakes won’t feast on while being bored. You can also add a gargoyle to the pit since they are made of stone and won’t be eaten too.

These are the 4 uses I would recommend if you want to add this monster to one of your campaigns in the future. There isn’t a lot you can do with a monster that has a challenge rating of just ¼. However, they do add a bit of flavour and variety to the start of a Dungeons and Dragon session with fresh characters. If you have any other smart uses for this snake, let me know!

Final thoughts: Don’t mess with this Giant Noodle in DnD!

You aren’t going to whip out a party of players who know what they are doing by sending out a couple of giant snakes with poison abilities at them. I think this monster is best to use when you want to surprise people. Their blindsight and ability to swim is really cool. Since a small river with a depth of 2 feet is very murky and often does not have a bridge to cross it, ambushing them with this creature is very easy!

If you are looking for a stronger snake to challenge your players, I would highly recommend you check out the Fire Snake in 5e. They aren’t just a bit stronger, they also have a very cool habit which can make their drop table pretty interesting!

How big is a giant poisonous snake 5e?

In 5e these snakes are medium-sized creatures. That means they command space of 5 feet by 5 feet on the board. They are about 10 feet long, which is about 3 metres in imperial. Now, I am not sure if I agree with the fact that they only command the space of a medium-sized creature. That is why sometimes when I think it adds value to the game, I make them a huge-sized creature. This is not in the rules, so make sure you inform your players when you do this!

What are some good giant poisonous snake tokens?

If you do not have miniatures in the form of a snake, then I suggest you make a token yourself with clay. These aren’t hard to make at all, since it is basically a noodle. You can also use Magic the Gathering cards with snakes on them as a token if you enjoy using cardboard and great art. I would strongly recommend you not to use wet noodles as one of my players once did. That did not end well, and ketchup does not add a good effect when the snake has been defeated, Josh!

What happens when I make a successful saving throw?