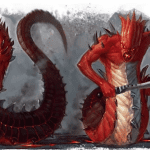 I love opening the monster manual and looking for monster uses that aren’t seen often in a campaign. Unfortunately, the humble Fire Snake in 5e DnD is one of these creatures you rarely see. It’s quite a shame because they are unique beginner monsters with some fascinating mechanics.

If you are interested in learning more about advanced monsters for higher-level parties, my guide on the Giant Four-Armed Gargoyle is what you are looking for!

This guide will help Dungeon Masters and players make optimal use of this monster for maximum fun and challenge. I mainly write from a dungeon master perspective since I DM more than be a player. However, that also gives me some insight into how a player can throw a wrench in a DM’s plans.

I will talk about the stats of these monsters, how a DM can use the creature to spice up a campaign, and how players can fight them.

What are Fire Snakes in DnD

Some say these are larval salamanders; others say they are snakes, and the smart ones say, who cares, just run! These monsters have a crimson to dark orange color and live in fires.

Massive permanent fires like coal fires can hold up to 1d6 of them. More often than not, Smaller fires only have a single one living in them. They are usually held in fire pits and oil bowls to look at or use when needed.

Fun fact for you loot hoards out there: Fire Snakes love to accumulate gems. So if you are a Dungeon Master, do not forget to add this little thing to their drop table. It makes for a much better experience for your players who go out to kill them. There are a ton of incredible gems in Dungeons and Dragons that can be used for magical jewelry – so go nuts!

As always, I will give an in-depth stat by stat description of the monster and tell you how these stats measure up and how to take advantage of them.

The fire snake in 5e is a Challenge 1 monster, so don’t expect too much from it. However, if you are just a beginning adventuring party, don’t underestimate these hot noodles!

Speed – They aren’t swift. The creature only goes 30 feet per movement, which is on the slow side.

Hit Points – They only have 22 hit points or a 5d8 if you want to make it more random. This number of hit points is not much, so a party of 3 or 4 beginners should have few problems with this monster.

Armor Class – The Fire Snake has an AC of 14 in 5e. This AC is pretty decent, and it protects this serpent from your attacks quite well if you can’t hit high yet.

Strength – The monsters have a decent STR of 12 (+1). This stat means their melee attacks are pretty accurate but not too much to be a massive problem if you have a good armor class.

Dexterity – DEX is the best stat of the Fire Snake by far. They have a 14 (+2) in this stat, which makes them have a decent AC and a good saving throw.

Constitution – The constitution or CON of the Fire Snake in Dungeons and Dragons is very average. They only have 11 (+0).

Intelligence – The INT is 7 (-2) of these creatures. So they are pretty dumb, and that is their main weak point. So they will hardly have a good INT saving throw.

Charisma – The creature’s charisma is another weakness of them. Unfortunately, it is only 8 (-1). That is pretty weak, but there aren’t a lot of valuable attacks you can use that force them to roll a saving throw for this.

As you can see, there isn’t much unique to them. However, Fire Snakes have some interesting immunities and vulnerabilities that can make them a bit harder to deal with.

The fire snake has one apparent vulnerability; the monster is weak to cold. So, in my Homebrew games, I also make them vulnerable to water. That way, cool beginner spells like Wall of Water are effective against fire monsters too. Of course, you do not have to do this. It is just a suggestion that worked for me; if you want to stick with the rules as they are written, that is fine too. Don’t forget that Dungeons and Dragons are about imagination and having fun, not about rule interpretations!

They are resistant to melee attacks like bludgeoning, piercing a slashing from nonmagical attacks. Interestingly enough, unlike the stronger helmed horrors, they also have this resistance against adamantine weapons and better. In practice, this won’t matter a lot. They are monsters you will only fight at the beginning of your adventure with weaker weapons like iron and steel. However, it is a fun little fact if you are thinking about making a more robust, superior Homebrew variant.

As for their immunities, being fire elementals, they can not be damaged by fire. Therefore, such spells as creating bonfire are not effective for them. Moreover, the Fire Snake is a material component to cast the cantrip to create bonfire – and Find Familiar – more powerful spells in 5e.

Don’t forget! The Fire Snake also has the heated body ability, which hits for an additional +3. More on that in the chapter below.

These are fun monsters to use as a Dungeon Master if your players have outgrown Goblins and Kobolds. They can hit a lot higher than their challenge rating would let on thanks to their unique ability. If you combine this with, for example, a tremendous underground lava place where there is fire all around your players, you have a potent monster that will give beginners quite the challenge.

They are a good monster to use in pairs. Even if you only have two of them, their AC and unique ability will give your players plenty to worry about. Make sure you also use their passive perception and darkvision to the fullest. Like actual snakes, make them strike out of nowhere!

You should also be aware of the weakness of these monsters. They are pretty slow and do not have a ranged attack. Their weakness against cold and many water spells can pose a problem too.

Fighting Fire Snakes as a Player

If you are a bunch of beginners, do not underestimate this monster. While it only has a challenge rating of 1, it can deal quite some damage and has an absolute immunity against fire.

You will probably be too low of a level to use a spell-like Planar Ally, so you will need to find a suitable alternative. This is where the tank of your group comes in. Make sure the Fire Snake does not target your lower hit point companions.

If you have water, ice, and ranged attacks, use them. The snake is weak to the first two and is pretty slow. So you can get quite some hits in.

Do not use spells like feign death, as the fire snake will probably just eat you, and you will die after being eaten, and the spell wears off after an hour.

It is good to have a life transference spell up your sleeve to get maximum burst healing if one of your fellow adventurers is in low health.

Question: What do Fire Snakes drop in 5e

Fire Snakes only drop gems. They love to accumulate these and sleep next to and on small piles. They are not interested in other shiny objects like coins. These snakes collect all kinds of gems, no matter if it is jade, topaz, or diamond. These monsters will be interested in collecting them. The Fire Snake is a great option to kill if you need materials for a spell that requires gems like Incite Greed and Revivify!

Question: Where can you find Fire Snakes

They are often found in large fires. They live and breed in permanently burning embers, like those caused by volcanos and burning coal and methane. Fire Snakes 5e can also be found in smaller fires, and you can keep them alive and well in a fire pit or oil bowl if you would like to have one as a pet though this is not advised.

Question: What spells can I make stronger with these monsters

The fire snake is used to empower two spells in Dungeons and Dragons. The first one is Create Bonfire, which allows you to create a stationary fire spell that damages everything that walks through it. The second spell is Find Familiar, a spell that gives you the power to gain the service of a spirit that takes an animal form of your liking.

Question: What are Fangs of the Fire snake in DnD?

The fangs of the Fire Snake are a monk feat in Dungeons and Dragons 5e. If you pick this ability, you can increase the power of your attacks. This ability has nothing to do with the monster but the name! So you do not need to sacrifice or tame one of these serpents to use this feat in 5e. The feat is not that powerful, so I would not suggest getting it or doing a build around it. However, the name is awesome, so I guess you can if you want to use it. You can also give it a small buff, as long as you know how to balance that.