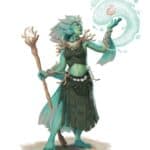 The Aquan 5e language was the speech spoken by the Elemental of the water plane. The plane of water is one of the four elemental planes besides fire, wind, and earth.

Aquan in DnD is part of the Primordial language family. However, the script used to write the language is dwarvish, which is quite ironic since they are found in the mountains and not in the water.

Tritons speak Aquan and are one of the most well-known users of dialect. These are a race that finds its origin in the Elemental plane of water. They look more human than Merfolk. They also speak common and the primordial dialect as their tongue.

The Merfolks are the most well-known speakers of the language. The mermen and mermaids are aquatic humanoids that speak the Aquan and common tongue as their primary languages. However, of the two, common is spoken the most.

This might be the strangest one on the list. These monsters are also named Deck apes, so yes, they are apes and not some water creature. These humanoids are well-known for their love of sailing. They likely picked up the Aquan dialect due to their closeness to the water.

Well, this is an Aquan speaking creature you rarely see in 5e campaigns. Aquatic Elves are also called Sea elves. Besides Aquan, they also speak the Elvish language. So please do not confuse them with Merfolk. Those are entirely different kinds of creatures.

These creatures are also known as the Watersoul Genasi. They are a standard extension of those known as the manifestation of the Genasi race. Just like the Triton, they also speak Primordial and the common tongue.

Aquan is one of the four elemental dialects parts of the Primordial language. The other three are Auran which is spoken by wind elementals, Terran – told by earth elementals; and Ignan, spoken by fire elementals.

Creatures who speak one of the four primordial dialects can easily understand one another.