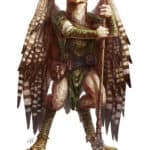 Contents hide
What does Auran sound like
Who speaks Auran in 5e?
Written Auran in DnD
Related Posts:

The Auran language sounds relaxed and resembles slow breathing or exhaling of air. It is a dialect of the primordial tongue. It is a very soft language that does not make loud sounds, even when said in anger.

Since it is part of the primordial language family, others who speak this dialect can understand Old Alzhedo. So, Ignan, Aquan, and Terran speakers can easily understand it.

Who speaks Auran in 5e?

There are quite some creatures who speak the wind language of Auran. However, I will not discuss the speakers of Alzhedo and Midani, which are derived from it.

The Air Genasi are a subrace of the genasi. They are also called wind soul genasi due to their power over the element of air. This is one of the languages they speak; they can also learn common and other languages since they are intelligent.

Smoke drakes, also known as Fumarandi, also speak the wind language. Like fire snakes, they collect gemstones and can also talk Ignan, the elemental fire language. Next to those two fundamental languages, they are also proficient in Draconic. Smoke Drakes are known to never raise their voice and always whisper, even when they are furious.

The kenku can understand this tongue quite nicely. However, they are not able to speak it fluently. A Kenku can only speak Auran in 5e by using mimicry. They can also talk common through mimicry.

This wind language is written in the Dwarvish script. That means it has simple straight lines and is often written on materials like stone and metal. This material makes texts written in Auran very long-lasting, and they will be readable even centuries after it has been untouched.