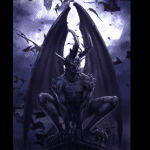 I love to help people explore the vast world of unknown creatures. The Giant Four-Armed Gargoyle in 5e DnD is one of those underappreciated monsters you barely see in a campaign.

This guide will tell you everything you need to know as both a player and a DM to use this monster to its full potential. This monster made its first appearance in the Tomb of Annihilation and has been underused. So, if you are a DM reading this, this statue monster is a great pick to surprise your players and give a unique fight. If you enjoy reading about more unknown monsters, I strongly recommend you the guide on Attic whisperers I wrote a while ago. I am sure you will enjoy it!

A giant gargoyle has to be stronger than a regular one, right? If we take a deep dive into the stats of a four-armed Gargoyle, the answer is a resounding yes. However, if your party had a successful run-in with these chaotic evil living statues in the past, that is by no means a guarantee of victory.

Let’s look at the stats in-depth! If you want to see a summary, check the image below this chapter.

Giant Gargoyles have a ton of immunities and resistances.

They have a very large pool of melee damage resistances. Not only that, but they will only take half damage when hit with bludgeoning, piercing, and slashing damage if the weapon is not magical or made out of adamantine.

Multiattack – Since the gargoyle has four arms, it can make quite a strong multi-attack. It doesn’t just hit you four times with the arms, but it bites you too. So that makes five attacks at once!

Bite – When the giant gargoyle bites you, it is a +8 to hit, it reaches 5 feet and hits for an 11 piercing damage. This bite is a melee attack.

Claw – This counts as a melee attack too. It has a +8 to hit, a reach of 5 feet, and hits for nine slashing damage.

Giant gargoyle 5e how to use it as a dungeon master

I love using this monster in my campaigns. Many players think this is just a regular gargoyle and underestimate it. They are perfect to ambush unexpecting players. If they are not moving, they seem to be normal statues if they are not moving, so you can hide away a giant four-armed gargoyle amongst regular statues pretty easily.

You can also make your monsters immune to a spell-like detect life by casting Feign Death on the monster and making it appear dead to anyone inspecting it. This spell will make the gargoyle a perfect replica of a regular statue.

How to fight the four-armed Gargoyle golem 5e dnd

If you want to fight this monster effectively, a good idea would be to use ranging attacks on them. They only attack from up close, so this way, you can do quite a lot of chip damage to them. In addition, you can use a wall of water in 5e to slow the giant gargoyle down if it is coming toward you. However, you need to be aware that they can fly over the wall.

If you are afraid of taking a lot of direct damage from their melee attacks, you might need some backup to tank them for you. You can summon a planar ally to help you out, but this is quite expensive, so make sure you budget accordingly.

Your best chance is using actions and attacks, which the four-armed gargoyle will need to make intelligence saving throws against. These will work almost every time since they only have a 6 (-2) in this stat!

If you aren’t in the mood to use a reanimated armor or a golem, a giant four-armed gargoyle is a great option to spice up your 5e DnD campaign. Many players are not going to expect this monster to be thrown at them.

Make sure your players do not underestimate fighting this monster. It has a high defense and can fly over stationary spells like create bonfire to avoid taking any damage from them. Their main weakness is that they have no ranging attack at their disposal. So that will allow a smart team to wear the monster down and take minimum damage from its vicious melee attacks.

Can you do a gargoyle player character in d&d?

Yes, you can. Four-Armed Gargoyles make for a very cool role-playing experience. You can choose to play as a normal one or a giant gargoyle with four arms. Just make sure that you aren’t too overpowered since you can do four attacks – or five if you want to bite too – at once.

What are some good statue monsters in 5e

Gargoyles are great as a statue monsters to surprise non-expecting adventurers who aren’t doing their perspective checks or are getting too confident. You can use them as guards of a mansion or have them protect a forgotten ruin or dungeon.

Who is lady Gondafrey in 5e DnD

Lady Gondafrey is a woman who has been transformed into a gargoyle in 5e. You will need to save her if you want her to take the shape of an elemental again. Of course, you can add your own twists to who she is, as there isn’t a lot of information about her.