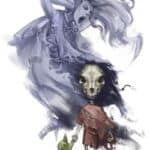 Whether you are playing pathfinder or 5e D&D, an attic whisperer can give a creepy element to any campaign! While small in stature, a good DM can make this creature one of the scariest in the entire game. The Attic Whisperer is all about a great set up and background story.

What is an Attic Whisperer?

The Attic whisperer is a small undead creature. It has the statue of a small child. The clothing it wears is made out of dust and cobwebs. The Attic Whisperer doesn’t have a human skull, but a fox skull as a head. The monster is also rather intelligent.

Though this description is not fixed. The Attic Whisperer is a mix of bones, ragged clothing, and toys. This means it can have a magical item incorporated into its form that it picked up as a toy.

In pathfinder and D&D

When a child is lonely and neglected and dies, there is a chance an attic whisperer spawns as a result. Unlike for example a zombie or a skeleton, not just the bones rise, but the body is made up out of clothing, old toys and other objects related to children. This means it is very possible for a magical item to be incorporated into the body of a creature. Attic whisperers can vary in appearance a lot depending on the items they are made off.

They are found near the place where they are formed. This means you can encounter them in old homes, schools and orphanages. However, it is not unusual to encounter them in a forest nearby small towns. Parents often left their children to die or fend by themselves instead of killing them or neglecting them till they died in their home.

They can lay dormant for many decades, even when the house they live in is inhabited. When a new child is born or brought into the home where they live, their dormant state becomes active. This is due to the fact that they want a companion or a playmate. Attic whisperers will whisper nursery rhymes and leave old toys in order to lure children to their dwelling place.

The skull of the Attic whisperer is not human. This is due to the fact that when it is formed, it does so without a head. The skull is purely decorative and is often a skull found nearby from an animal or another creature like a goblin. Having one, or not, has no influence on its power.

The attic whisperer is likely somewhat based on myling. The mylingar are monsters from scandinavian folklore. A myling is a child that has been incarnated as a phantom, and roams the earth until they can convince or find someone to give them a proper burial.

A myling, much like an attic whisperer, is formed when neglected and killed by the mother. They sing in the night about their mother and how they were murdered. They harass travelers they come across to force them to bring them to the graveyard. If they are not able or willing to bring the myling to a grave, they kill the travelers in a rage.

What are their powers

The attic whisperer has some pretty unique powers. It has an Aura of Sobs that makes childlike whimpers, songs and sobs. The effect of this Aura is that all bardic performances are nullified.

Another interesting power is to steal breath. If bitten by an attic whisperer it is possible that the target becomes fatigued for one hour. If already fatigued, the target becomes exhausted, and when already exhausted it falls asleep. When the creature is killed the status effect is removed.

Steal Voice is the most interesting power in my opinion. When hit with this attack a creature can not talk for an hour. Meaning spells with a verbal component or bardic songs are useless. The attic whisperer perfectly mimics the voice of the victim. Even when the voice is returned the creature is still able to use the voice and speak every language the victim knows.

A good way to immerse your players into the game is by making up some nursery rhymes. The text does not have to be scary, definitely when they have no idea they are dealing with a monster. You use the rhymes to set the scene or make a quest around them pretty easily if you have some imagination. Using old 1930s rhymes is also a good idea. Make sure you have an appropriate soundtrack from Youtube or Spotify.

The terror of woodhaven

The adventure takes place in a small town called Woodhaven that has been haunted by the spirit of a lonely woman for decades. The players will take on the role of children who have been drawn to this town because they have sensed something strange about it. They will be living with their aunt for a few weeks while their parents are away on business and will explore the attic as well as other parts of Woodhaven to find out what has been happening there.

The house on the hill

The adventure begins with the party being called to investigate a mysterious house in the village of Elmore. The house is known as “The House on the Hill” and has been abandoned for years, but there are rumors that it has been occupied recently by some unknown creature. The party arrives at The House on the Hill and finds a locked door at ground level. They climb a ladder to an attic window, break in, and explore inside.

The experiment of the wizard Strahd

The attic whisperer is a creature that was created by Strahd to watch over his castle and keep it safe from intruders. The creature has the appearance of an old man with a long beard, dressed in tattered robes and with a staff. It resides in the uppermost room of the castle’s highest tower, which can only be accessed by climbing one hundred steps or by flying.

In the 5th edition of D&D, the attic whisperer is a creepy monster that you can find in an adventure. It is a type of undead creature that can be found in any house with an attic. The goal of this adventure encounter is to introduce players to the game and provide them with a low-level challenge that will allow them to feel accomplished after defeating it.

The creature is said to be a human with an undead spirit, who can have the skull of a fox, a rat or a bird. If you are looking for some adventure, then this might be the perfect creature for you.

If you are looking for some scary adventure, then this might be the perfect creature for you.

Can an attic whisperers be reasoned with?

Yes, you can’t reason with it but only to some extent. The creature has a high intelligence and understands languages. However, it does have its own motivations and goals. It wants toys and to be put to rest. You won’t have a peaceful conversation with them and they are able to get emotional. Their motivation comes from loneliness. The reason they lure children with nursery rhymes, stolen voices and toys is due to the craving for friendship.

How heavy is an attic whisperer

Due to it being mostly bones, ragged clothes and the occasional toy, the attic whisperer weighs about 8 kg or 17 pounds. Its low weight is due to the fact that it is no larger than a small child.

What does an attic whisperer do?

In essence, it haunts buildings and abandoned places. The attic whisperer is not an evil creature in some cases. It is motivated by loneliness and wants the comfort of a mother and the companionship of friends. To achieve these goals it tries to find potential playmates to its place with toys and rhymes.

Does killing an attic whisperer return your voice?

Yes, killing the attic whisperer is one of the ways to get your voice back. However, there are other ways the creature can be reasoned with or forced to give it back. A little-known fact about its power is that, when it returns the voice of a victim, the attic whisperer can still use it. The monster can also speak every single language the owner of the voice knows.

When did the attic whisperer 1st get released?

I have not found a really satisfying, definite answer to this question. The earliest mention I could find of them is in Pathfinder. There is a great example of the attic whisperer in the Rise of the Rune Lords story.

What loot does an attic whisperer drop?

When killed the attic whisperer is reduced to its parts. These are bones, dust, toys, and so on. A lot of times these can be marbles, metal playthings, and teacups. On some occasions, it is possible that the attic whisperer picked up a magical item. In that case, it gets dropped as loot when the creature is killed.