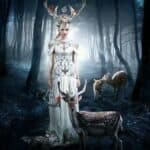 Most people have at least heard the name of the Horned God once or twice in their life. However, not many people know who Flidais the goddess to be considered the female counterpart of Cernunnos is.

Whether you are a history buff like me, Wiccan or looking to spice up your fantasy novel or DnD campaign, knowing more about mythical creatures is always fun. Sometimes when you take a dive into the history and legends of people where only a fraction was literate, it is hard to find what stories people considered to be true and which were for entertainment.

Celtic civilization and pagans as a whole were no different. Much of their oral history has been lost forever, and written words often did not strive for accuracy.

Contents hide
Who is Flidais
Other similar Forest Gods and Goddesses like Flidais and Cernunnos
1. Tellus – The Roman Goddess of nature
2. Diana – Roman Goddess of countryside and hunters
3. Silvanus – Roman minor God of the forest and the wild
Conclusion
Related Posts:

Flidais, sometimes also called Flidas, is believed to be the Irish goddess of cattle and fertility. She is considered to be a very complex Goddess due to the many tales and stories she is a part of. Celtic pageants considered her to be a woodland spirit that protects the trees, plants and animals residing in the woods. Just like her male counterpart Cernunnos she is associated with mystery and the mystique of the wild.

In Celtic mythology, Flidais rules over the wild things in the forest and is accompanied by a magical herd of cows. However, others claim that much like King Arthur, Flidais is a person that has been incorporated in legends and not a deity.

As always with old texts it is hard to figure out what was deemed to be just a story and what was supposed to pass for the truth. In the story of Tain Bo Flidhais she dies, which is something Gods rarely do.

In one of the stories, she transformed into a horned stag, which is one of the main reasons a lot of people consider Flidais to be the female counterpart of Cernunnos. The other reason would be that she is a goddess, just like the Horned God, is that she is obviously linked to mythology and has much of the same domains. Unlike King Arthur who is clearly a more mythical figure and not a God, Flidais is often referred to as the Divine protector of nature and animals.

Flidais is thought to have the ability to absorb the powers of nature, and use it to protect the wild. She is also thought to heal animals and plants with this power, and can invoke natural disasters if needed.

In many legends, she is also called the Goddess of the hunt. Making her very similar and likely linked in some way with the Greek god Artemis and the Roman Goddess Diana.

Other similar Forest Gods and Goddesses like Flidais and Cernunnos

1. Tellus – The Roman Goddess of nature

Tellus, sometimes named Terllus Mater, is the goddess of the earth and nature in Roman mythology. She is considered to be the guardian of all that lives on earth. Animals, plants and all in between fall in her domain. Just like Flidais and Cernunnos ,she is associated with fertility, cattle and wild animals.

Diana is also a very good candidate if you are looking for a female counterpart for Cernunnos outside of the Celtic religion. In both Hellenistic and Roman mythology is the goddess of the hunt, wild animals, and fertility. Another feature that makes her very similar to the Horned God, is that a very common feature to find in temples dedicated to Diana is that there are stag antlers.

3. Silvanus – Roman minor God of the forest and the wild

While not female, Silvanus is also a very interesting alternative to Cernunnos. The name Silvanus literally translates to ¨of the woods¨. He is considered to be a minor deity of uncultivated lands and forests. His greatest joy is watching trees growing in the wild. Just like the other Gods on this list, Silvanus is closely related to cattle.

Flidais is a very complex being, and there is little reliable literature to rely on when going on a fact-finding mission. While she can be considered to be the female version of Cernunnos, there are many other goddesses that could make claim to this title. If you are a dungeon master or a fantasy writer, this ambiguity is great. It means you can fill in the gap with your imagination and have plenty of leeway for interpretation. For historians, there is much more to be discovered about Flidais, and Celtic mythology as whole.