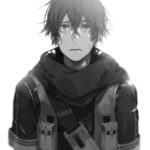 Since Isekai anime has become so popular, more and more shows feature some kind of RPG level-up system. A lot of those however belong in the trash. I have no idea who is green lighting some of these shows, or who enjoys watching some of these. Luckily, there are quite a few diamonds in the rough.

Contents hide
About level up systems in anime
7 anime with a level up system that are worth watching
1. Hai to Gensou no Grimgar
2. Overlord
3. Arifureta: From Commonplace to World’s Strongest
4. Kumo Desu ga, Nani ka?
5. Sword Art Online
6. Log Horizon
7. The King’s Avatar
Anime with a level-up system conclusion
Related Posts:

About level up systems in anime

So what do I mean with a level-up system? Simple, the main character and others like his party members and NPC´s can become stronger and their increase in strength is quantifiable in numbers. Dragon Ball is a great example of this, but I am not going to include it in this list.

I will limit myself to the anime that I have watched and liked that are following RPG rules. These animes should have classes, magic systems, combat levels etc. This is why a lot of these on the list are going to be Isekai.

7 anime with a level up system that are worth watching

1. Hai to Gensou no Grimgar

Also called Grimgar of Fantasy and Ash, is by far the best level-up system anime that I have seen. While it only has one season, there are a bunch of light novels you should definitely check out.

Hai to Gensou no Grimgar has everything you want in a fantasy anime. Yes, it is Isekai, but it predates the mass production of the genre. Every single scene is an art piece due to the distinct watercolor style of the artist.

The show begins with a group of people of high school age finding themselves in a world unfamiliar to them. They do not remember their past life on our earth, but sometimes there are flashbacks hinting at their origins.

In order to survive in this unknown world, they take up a job as volunteer soldiers, who also act as adventurers. As you expect from high-schoolers their skills in combat with monsters like goblins is subpar.

The party decides they need to become stronger. Each takes up a combat class that is heavily based on RPGs. To make money, they hone their skills hunting the weakest of monsters: Goblins and Kobolds. Soon they realize the reality of their mortality is still true in this fantasy world.

Here I go again. I know, Overlord makes it to almost every single one of my recommendations, but it is just that great in my opinion. Skeleton daddy and the gang have everything it needs to set it apart from the pack. Overlord also has a manga and light novel series that I strongly recommend you to check out!

The story features a vast world with multiple combat classes, a tier-based magic system, NPC´s with levels, and much more. The author is a major DnD geek like me, and it shows!

Our MC role-plays as an evil lich overlord in the DMMORPG YGGDRASIL. After 12 years, the game servers are announced to be shut down due to a dwindling player base. Momonga, the leader of the fearsome guild Ainz Ooal Gown, logs in one last time to say goodbye to the game and wait until the servers are shut down. However, the game doesn’t seem to be shut down.

Soon he realizes he has been transported as his player character, together with the Guild building and NPCs into an unknown world, the new world. Mononga starts to explore this new mysterious world and tries to find any remnants of his former guild members and YGGDRASIL.

Reading tip: our write-up 19 Light Novels like Overlord will give you a ton of new reading material!

3. Arifureta: From Commonplace to World’s Strongest

Arifureta is based on the web novel with the same name is the archetype of a weak main character who becomes really strong. The anime is fairly entertaining and features a massive dungeon filled with strong, powerful monsters.

Our main character is quite likeable, but the side characters feel a little one-dimensional in my opinion. The amount of fan service and clichés is also a bit off-putting and doesn’t add any value to what otherwise would be a very good dark fantasy anime.

When he and his class go on a dungeon raid they betray him and one, a male classmate of his tries to finish him off by letting him fall to the bottom of the dungeon. There he fights for his survival, becoming much stronger in the process.

Also called So I’m a Spider, So what, is about a teen girl that has been reincarnated into a fantasy world in a large and dangerous dungeon. The anime (and manga) feature a very cool level-up system where you not only get a higher level and abilities but also get a new combat class.

The show is great. It keeps you entertained and amused. While the premise sounds a bit silly, don´t be put off by that. Having a MC that isn’t human in the slightest makes for some very original scenes, dilemmas and overall story.

So unlike most Isekai, our protagonist is not a human or a demi-human but a Small Lesser Taratect, a weak spider creature with very high potential, if you play your cards right. She is born out of an egg with many siblings. Her brothers and sisters are ruthless monsters that have no real intelligence and only an instinct to survive.

Cannibalism and fighting are common. Kumoko our MC has kept her human intelligence and is able to escape into the dungeon where she fights for her survival using cunning, skill, and sheer luck.  Here are our recommendations for more light novels like I am a spider so what!

Ah SAO so much wasted potential. Despite having one of the most unlikable MC´s ever in Kirito, the world of the first season was amazing. It had quite a unique setting and the plot twist was fun too. Unfortunately, the second season was, in my honest opinion, horrific.

I have tried many times, but have never been able to finish it. I just couldn’t connect with the story anymore and care enough about the drama around Asuna. Despite that, I still think you should check it out. It is arguably the show that gave birth to the whole Isekai anime hype and the beginning of the end for quality transported into game stories.

The anime and light novels feature multiple VR worlds. The first one is Aincrad, a world with no guns and just swords. 10 000 players have been trapped inside of the game after a mysterious man named Kayaba appears. He tells them they need to beat all 100 floors of Aincrad´s steel castle to be able to log out. There is a catch, those that try to remove their VR helmet or die in the game will die in real life.

Log Horizon has a level up system in the anime, but it isn’t as crucial to the story as the other shows on this list. As good as every single notable character that has been trapped in the game is the maximum level of 100.

However, there are some interesting exceptions where they train noob players to be stronger to help them out fighting in this new world. What makes this show so good is that it features a much deeper story than a lot of the hack and slash anime on this list. There is politics, economy, intrigue and betrayal.

The story takes place in the game made in the real world – Elder Tale. 30 000 Japanese players who are logged in at the time of the release of the 12th are transported into the game world. Shiroe, together with his two party members Naotsugu and Akatsuki explore this new world and try to overcome obstacles, and challenges from both NPCs and other players alike.

This Chinese anime  – or donghua – also known under the name Quan Zhi Gao Shou isn’t an Isekai like all the others on this list but still features an amazing level-up system. The main character is a gamer with life outside the game he is playing.

The story revolves around an Online Multiplayer named Glory. Our protagonist Ye Xiu is a professional gamer and the best Glory player according to many. He is forced out of the esports team that he captains and is made to give up the strongest account in the game. This forces him to leave the sport.

While working in an internet Café he casually starts playing again, building up his character and leveling up fast due to his vast knowledge of the game.

Anime with a level-up system conclusion

There are a ton of different anime that have implemented a level-up system. Almost all of them are part of the Isekai genre and take heavy inspiration from either JRPGs, Dungeons and Dragons, or Dragon Quest.

This means that almost every single one of these has typical fantasy elements. One notable exception is the King’s Avatar. However, this anime still borrows quite a lot from RPG games.

A notable honorable mention on this list is Goblin Slayer. I have chosen not to include this manga because the level-up system is not a big part of the story. If you enjoy light novels and manga’s more like Goblin Slayer, I have written a specific article about similar manga for you to find a great suggestion on what to read next.