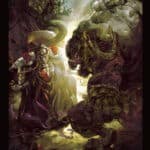 I read a lot of Fantasy, so much so that I decided to branch out to the great fantasy novels of Japan. I have read over 30 Japanese light novels and books in the last year of highly recommended authors. These are the ones I liked most of all. I’m sure I have missed a couple of must-reads, if you have a suggestion for me to read, let me know!

You will definitely see a lot of western elements in some of these books. Dragon Quest has had a major influence on the genre in Japan, to the extent that DnD made an impact on authors in the United States. This will become extremely obvious when you read vintage fantasy from the land of the rising sun.

I have read the English translation of these books, as I do not speak or read Japanese. This might have some influence on my opinion of the book, as the original is almost always better.

Contents hide
10. Dragon Sword and Wind Child
9. The Twelve Kingdoms
8. Record of Lodoss War
7. Hard-Boiled Wonderland and the End of the World
6. Musashi and Taiko
5. Guin Saga
4. Guardian of the Spirit – Moribito
3. From the New World
2. The Weathering Continent
1. Overlord
Related Posts:

It isn’t too hard to find good Japanese fantasy novels that aren’t light novels, if you know where to look. Dragon Sword and Wind Child from Noriko Ogiware is an absolute masterpiece for young adults. The book has two sequels that are also very recommended, Swan’s Strange Legend and Pink Nymph. The trilogy is known here in the West as The Jade Trilogy. I highly recommend you give the first book a try to see if the writing style is something for you. The series is one of the most popular Japanese fantasy novels.

Noriko Ogiware has obviously been influenced very much by Dragon Quest and Narnia which gives this book a lot of familiar elements. A girl named Saya is the protagonist. She suffers from intense nightmares that keep reminding her of the war that made her an orphan. When she meets the demon from her dream she learns that her destiny is a lot larger than the normal village life. There are loads of interesting creatures like demons that will keep the monster fans amongst us entertained.

The book is quite short, so you should be able to easily finish it in a day. Despite the western influences, the Asian elements in the novel make this a truly unique work and a great introduction to Japanese fantasy.

Fuyumi Ono has taken a lot of inspiration from Chinese history and mythology to write this night novel series. I really enjoyed the parallels with the classical Chinese literary work the Four Kingdoms.

As the name suggests, the series, which consists of 9 volumes so far, is really heavy on world-building and geography. This sometimes makes it a bit hard to follow, definitely if you aren’t familiar with or good at remembering Japanese names.

This story also features a female protagonist. Youko Nakajima is transported from Japan to the Twelve Kingdoms. So if you like Japanese isekai fantasy light novels, this is a great pick! The book is more complex than your average LN, with the focus on several characters. While the first book was published in 1992, the series has recently picked up the pace again and a 10th volume is expected to be published soon.

The Record of Lodoss War is one of the Japanese fantasy novels which reads very well in English. I would have never suspected this was a translation. Something I like very much about this light novel.

Ryo Mizuno has drawn massive inspiration from RPG games like Dungeons & Dragons and Sword World RPG. If you are reading these novels, you might be reminded about a D&D campaign you once played as the story line is very similar. \

Some people do not like this, but I do. The light novel is very easy to get into if you like vintage fantasy and is easy to follow. The book follows the adventures of the son of a former knight, Parn. Just like in DnD the protagonist joins a party and goes on quests. There are a lot of interesting monsters like high elves and necromancers.

7. Hard-Boiled Wonderland and the End of the World

I think most of us are vaguely aware of the existence of Haruki Murakami. He is one of the most well-known Japanese authors worldwide in the 21st century. Hard-Boiled Wonderland has enough fantasy elements in the book to make it into my personal favorites.

As always, with Murasaki´s books, I have enjoyed this one from start to finish. He has a very distinct writing style, which is hilarious, bizarre, and entertaining. This book is the ultimate blend between Kafka and fantasy books.

The book is one of the few on this list that features some kind of subterranean monsters. The deeper themes are also very intriguing. There isn’t much to say about the book as it is too absurd to find a good starting point on where to begin the explanation. I think you should at least give it a chance for 30 pages and see if you fall in love with Murakami like millions before you.

These are two books by the same author, Nahoko Uehashi, but they are written in the same style. They are stand-alone novels, so you can pick either one. Both are japanese epic fantasy novels.

Musashi is a historical novel about the legendary Miyamoto Musashi, a swordsman who wandered Japan teaching pupils. It has been sold 120 million times, so it is an absolute Japanese bestseller. Musashi is known for having been undefeated in 61 duels. The second-best on the list, Ito Ittosai has just won 33 times. This is why Musashi is also called the sword-saint of Japan. Taiko is much the same. It is ¨ An Epic Novel of War and Glory in Feudal Japan¨.

Out of the two I recommend you read Musashi. The book is more entertaining and has had a much larger cultural impact.

I admit, I have not read all of the more than a hundred volumes in the series. However, I did read about 11 which gives me quite a nice insight into the story and how good the writing is. Well, let’s say you don’t get to publish more than 100 books if you are a bad writer!

The Guin Saga is a very good classic Japanese fantasy, and that is something I love about this book series. The story is about a warrior named Guin who wears a leopard mask that has been affixed to his face by magic. He is extremely strong and knows nothing else besides his fighting instinct.

If you want to read a hack and slash series that will keep you entertained for months, Guin saga will be an awesome experience. The biggest drawback about having so many volumes – 130 to be exact – is that a lot of them are not translated into English.

4. Guardian of the Spirit – Moribito

This 12 volume Japanese fantasy novel is amazing. It has an anime adaptation, but I strongly recommend you to read the light novels. The books read like a train, the story is fast-paced but still in-depth.

Our protagonist is Balsa. A warrior who has had 8 deaths in her past and now wants to attain for those by saving 8 lives. If you are looking for a fantasy book in a Japanese setting with a strong female protagonist, Guardian of the Spirit is the book you need to read right now!

Little known fact, Kaiseisha the author intended this to be a children’s book, however, the novel had many more adult fans than expected.

3. From the New World

This is another great Japanese coming of age story in light novel form. The light novel is an absolutely must-read if you like dystopian fantasy. The story tells about how a new society formed after people started to develop physical powers. The main characters are children that try to discover the dark history of the world and how order is maintained.

The world is pretty intriguing and the From the New World anime is better than the anime in my opinion. It is a great example of what Japanese dark fantasy is about. It has a lot of horror elements that most of you will enjoy.

I do think having children as the main characters is a drawback. They don’t feel relatable and oftentimes they are written like adults, making you wonder what the point is of not just making them teens or adults.

This is another Japanese adventure fantasy light novel series with quite some volumes, 28 to be exact. The story is about a group of 3 travelers each having their own combat class. There is a sorcerer Tieh, a warrior Bois, and a young man named Lakshi. They travel through the continent of Atlantis.

The light novels are absolutely great, and the characters have a good development curve. The travel throughout The Weathering Continent is also very enjoyable, and you won’t feel like the novels are dragged out.

There is a movie, however, I recommend you not waste your time. It feels boring, the plot is slow and there are way too many flashbacks that don’t really add anything to the story.

Overlord is the best Japanese Fantasy light novel of the decade, and maybe even that is an underestimation. There I said it. It has everything I want in fantasy. An evil protagonist that is a lich commanding an army of monsters. It is very heavily inspired by D&D and every novel grabs your attention start to finish.

The story is an Isekai plot, where someone is trapped in a game as his character, in this case an overlord. The strongest undead class possible. There are tonnes of different monsters, a very cool tier based magic system, and the MC is overpowered, strong and likeable.

If you are planning on reading Japanese fantasy any time soon, please try overlord. I am sure you will not regret it!