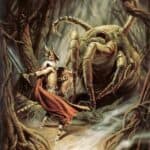 Before we start, let’s get out of the way what we mean with old fantasy board games. For this article, we are going to consider everything from before the year 2000 as old. My sincere apologies to our older readers if this just gave you the realization the years are starting to add up. No worries, I feel the same and I think and hope we too will age like fine wine, just like these fantasy board games have.

The obvious number one for me would be Dungeons & Dragons. However, that is just a little bit too predictable. I do think I have played some board games some of you might have never heard of before. If you don’t agree with my opinion, or if you have a great recommendation that I should try, let me know!

While not really a fantasy board game, Magic the Gathering is old enough to be considered for this list. While this is a traditional trading card game, the reason I am going to put it in the article is because of the new MTG expansion. Adventures in the Forgotten Realms in the ultimate Nerdgasm game. A slick combination of Dungeons and Dragons and the mechanics of Magic is bound to be amazing. For those not really into DnD, the Forgotten Realms, also called Faerûn,  is one of the first settings of the role-playing game. I am very excited for this to come out. I do think, and hope, that there will be a solo RPG playing option for Magic the Forgotten Realms.

Deathmaze came out in 1980 and is one of those fantastic dungeon crawls. The game is a little different than most other table tops on this list. In order to play it, you need either a Game Master who plays the monsters (much like D&D) or you play with numbered paragraphs. The encounters in Deathmaze are 100% random, and you slowly build up the dungeon throughout the game.

I think Deathmaze is still a board game worth playing despite the advanced age. This year, the table-top celebrated its 41st birthday. I think the game is especially well suited for beginners that are looking for a game they can make more complex later on. For more serious board game players, you won’t find anything special here. If you are a solo RPG tabletop lover like me, Deathmaze is a great game to play alone as a single player.

Also called Dungeon Quest by heretics, is an older fantasy adventure board game published in 1985. It’s origins are in Sweden. You can play the game alone or with up to four players.

You have to navigate a labyrinth in a castle in order to steal the treasure of a fire dragon. The winner of the game is the player who can make away with the most gold and riches at the end.

The thing that bothers me is the long setup time of 10 to 15 minutes. The short game time can be a negative or a positive depending on your playing style. What I like a lot is that you can play this old board game all alone and the game itself is very random. Dungeonquest has simple rules and doesn’t require much skill from the player.

Elfenland is one of those great old Fantasy Board Games that are easy to set up and fun to play in larger groups of 4 to 6 players. This table-top came out in 1998, so it is quite recent. It also won the German Spiel des Jahres award (game of the year) in that same year.

The goal of the game is to travel to as many cities as possible and then go back to the city where you came from, your home city. To do this Elfenland uses transportation cards. These will give you for example a troll wagon or a raft. You need to be strategic, because some of those transportation methods work a lot better on some terrains than others. Elfenland also has a much less popular expansion that didn’t sell all that well, named Elfengold.

Elfenland is more fun to play than it seems like. I would recommend this game if you like strategy and aren’t much of a fan in regard to fighting and treasure hunting.

Published in 1979, Magic Realm is one of the oldest fantasy board games on this list. The game is very strategic and complex. It is a nice cross between an RPG and a wargames. The amazing thing about Magic Realm is, it can be played as a solo board game, but you can also play with up to 16 players!

These factors have given Magic Realm a real cult status among the fans. There even is an unofficial rule book that fixes a lot of the issues with the rules of the second edition, which were often up to interpretation. There is also a very large online following. You can still play the game on sites like Realmspeak.

I love Magic Realm, however chances are you will hate it. The game is complex, hard to get into and absolutely not beginner-friendly. It will take hours if not days to really understand how to play it well. I do recommend it if you enjoy complex wargames in a fantasy setting.

If you are looking for an easy RPG where you explore dungeons that are random and fight monsters, then Mighty Warriors might just be the thing you are looking for. The fantasy board game is kind of old, published in 1991, but still holds up.

The board game is one of the rare table tops where Skaven plays a main role. These ratmen are an absolute headache for this fantasy world, and your task is to kill them. There are 2 to 4 players needed to play the game.

I would definitely recommend this game for beginners. It is very easy to get into, has quite some replay value, and isn’t too extreme on fantasy.

If you have luck on your side and love a good strategy fantasy RPG this old classic board game is one you need to try. It is heavily inspired on D&D but doesn´t need a dungeon master to be played. It is also a great game to play by yourself if you enjoy solo RPGs. The table-top can also be played competitively and as a team.

Adventurers explore a multi-level dungeon that is random and encounter monsters, traps, and treasure. The big strength of Sorcerer’s cave is that it can be played alone and has a minimum setup time. It is great to play with beginners and people new to fantasy board games.

I´m a major fan of this game and I have played it quite a lot. It is pretty similar to DnD without a lot of the drawbacks. It’s great to play alone and with friends, as the rules are pretty easy to understand and you don’t have to play competitively.

If you like games that are big, Shadowlord is a great pick. Your goal isn’t to become something small like a king, rather you try to become master of the universe! You do this by defeating the armies of the Shadowlord before your time runs out.

Adminitly I am taking the term fantasy a bit broad here. You could easily call it a Sci-Fi game, too, as spaceships play a major role. While the game came out in 1983, it still is a nice time pass for you and your friends.  I do think Shadowlord doesn’t have a lot of replay value. The online community is also on the small side, making it very difficult to find games.

Quite controversial, I’m sure, but I think the Enchanted Forest is one of the best old fantasy board games that you can play. The goal of the game is to remember the locations of fairy tale treasures.

The king has grown old and has no children. He is looking for a successor to the throne. You need to find 3 of those treasures, and you will be named the new king.

The good thing about Enchanted Forest is that it is one of the few really casual fantasy board games on the market. It´s a great way to introduce children to fantasy table tops too, even if the game is 40 years their elder.

38 years ago, this fantasy adventure board game was first released. As of now, there are four editions. A tribute to how good the original was. You will need 2 to 6 players to play, and an average game takes about 240 minutes.

All of these years later the game still has a very active community online with tons of custom-made versions of the game with extra expansions, cards, objects and so on. For The Big Bang Theory fans amongst u: The game that Sheldon and Leonard were playing in the living room was Talisman the fourth edition.

Personally, I love the game a lot. I think it is great for both beginners and more experienced players. Due to the active community that is still playing this game, it edges out a lot of other games on this list, simply due to the fact you can’t find people to play them with you easily. The only negative about this game is that you can’t play it as a solo RPG board game.

Have we missed a great old fantasy board game? Let us know, and we will play it and maybe add it to the list!