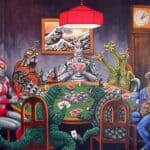 What is an RPG Card game?

In this article, we are discussing card games that help you to role-play traditionally. Not just a card game that has an RPG element here and there. Often in these games, there are no dice, nor is there a character sheet. The randomness of the play is almost entirely dependent on the cards you draw. Often, you can end the session in an hour or less making it excellent for a party. They are not as drawn out like for example DnD which takes much, much longer to complete.

To make my personal favorite, there are a couple of requirements. I have played all of these games myself a couple of times, so I think I’m pretty informed on the topic.

To make a good RPG Card game, I want the core of the play and randomness to revolve around the cards. It needs to be more than enough to play a satisfying adventure. There also needs to be a cooperative or competitive aspect to it that makes you have a fun time when playing with friends or family. Preferably, it has fantasy elements like monsters, magic, etc. in it. However, this is a more personal preference.

You know that I can’t make a list without sneaking in some D&D inspired or based game in it. This adaptation of Pathfinder RPG transforms it into an amazing swords and sorcery adventure dungeon-crawling card game.

Paizo is still working hard on making the Pathfinder universe huge. No year goes by without additional campaigns, characters, weapons and items being added. The Core set has 12 characters and over 400 cards. The online community is also huge, and has a lot of home brewed cards, characters and equipment you can add.

What I like about Pathfinder Adventure Card Game – I have sunk dozens of hours into this game. No wonder, because I absolutely love it and I am sure you will too. It is very easy to play due to the balanced pre-made characters and adds a nice touch of randomness and customization.

The reason why I have not put Gloomhaven at number one is because it is much, much more than just a card game. When I weighed my Gloomhaven box it was about 18500 grams. While there are a lot of cards, there are also maps, a board, figurines and other odds and ends.

For those unaware about this board game, Gloomhaven is a dungeon crawler and cooperative fantasy game that draws very heavy inspiration from Dungeons & Dragons. Don´t worry, to play Gloomhaven you don’t need a Dungeon Master and a 300 page rule book.

The RPG card game aspect comes from the fact that you as a player have to use cards to engage in combat, do actions, support other team members and move around in this open fantasy world.

What I like about Gloomhaven – I like how complex it is and how much replay value you have. There are tons of different missions you can do, and there also is a very cool expansion. While expensive, you definitely get your money’s worth with all the stuff you get in a box. You won’t be able to play a casual game of Gloomhaven on a train, but I have had countless amazing game nights at home.

Don´t let the name put you off, this is such a fun card game to play with a group of friends. The game takes about 30 minutes to an hour to play, and you do all kinds of fun activities. You fight with Eco-terrorist, you try to negotiate with Bitcoin criminals, and so on. The game plays like a parody on the Metal Gear Solid series. Something fans of the franchise will definitely appreciate.

What I liked about Dog Bear – You can take the card game everywhere you go. All you need is a rule book, which you can have as a pdf on your phone and 52 conventional playing cards. That is it! You don’t need to be a big RPG fan or have a lot of experience with card games. It’s funny, a bit ridiculous and really nice to play casually. I think Dog Bear is the best Role Playing Card Game you can bring with you on a trip to play on the plane or on the train.

I have played a couple sessions and I can’t wait to play this one again. It is very easy to set up and your personalized characters take about 5 to 10 minutes to make. There is also quite a large community online for you to chat and interact with if you want to talk about Castle Falkenstein.

The rules can be a bit hard to understand and the RPG is really culty. That second point can be a positive if you are into this. There also are a lot of steampunk elements that you will definitely enjoy if you are a fan of the genre.

What I liked about Castle Falkenstein – This card game really is a hit or a miss with the strange Role playing mechanics it has. They are quite unique and definitely not for everyone. I did like them mainly due to the fact they are a bit different, but they leave a lot to be desired. The setting of the game is amazing and with some thematic music in the background you will definitely have a lot of fun role playing!

If you have a large group of friends, Royal Blood RPG is a great card game. You need at least three players and a Game master for it to be awesome. I think 5 players is the sweet spot for this game.

You play as a magic-wielding royal in a court where there are shape-shifting monsters pretending to be humans. You need to take their powers for your own and then plan a heist.

The game is quite casual to play, and you don’t need a lot of props. A tarot card deck and some coins is all you need. If you like art a lot and want a more grim atmosphere, I recommend the 7th Sea tarot deck. It is the perfect match with Royal Blood RPG’s feel.

You can also play this RPG on android, so there is no need to buy physical cards or find a group of friends. However, I personally hated it. I gave it a try but ended up installing it after 25 minutes.

What I liked about Royal Blood RPG – I liked that you only need a tarot deck, coins, and the book. There aren’t many rules, so you don’t need to spend a lot of time setting up and explaining how everything works to new players.

This is quite an old rpg card game, the oldest on the list as far as I can see. It still holds up and is really fun if you like an old school D&D setting. There is a lot of lore around the place with a whole lot of novels. Just know, it isn’t a pure card game like some others on this list.

Just keep in mind that only the 1996 version uses cards instead of dice to add the random element to the game.

What I like about DragonLance RPG –  As you might know, I am a huge D&D fan. DragonLance is great to satisfy that craving without spending hours on a session. Without a doubt it has the largest backstory of all card games on this list, so if you love lore like I do you will love DragonLance. There are about 190 novels (and counting) that take place in this Dungeons and Dragons setting.

This is my favorite out of all of the dozens RPG Card Games that I have played over the years. Phoenix Dawnstar Command was a very successful Kickstarter in 2017 by the makers of Gloom and Eberron.

The game is really fun to play if you are experienced and have a group of players that knows what they are doing. The game is intended for three players and has just enough cards for that number. Which is kind of a drawback in my opinion. Limiting it to such a small amount doesn´t make it all that appealing if you want to have a proper game night.

What I like about Phoenix Dawn command – This is definitely a challenging game that will keep you entertained. I think you can easily spend dozens of hours without getting bored. It has everything you want in a good RPG card game. The artwork is simply amazing in my opinion. You can choose out of a lot of player character classes that you need to balance in your party. I do advise you to use a character sheet if you want to keep track of everything and having a nice background really adds to the immersion and realism feel of this game.

Have you played a great role-playing card game that I or our readers should try asap? Let us know, we would love to hear from you!