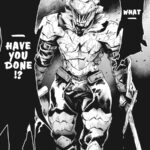 The tale of Goblin Slayer is a dark fantasy story that has been released originally in a light novel, and later in anime and manga form. If you liked the anime, you will definitely love the manga. The art style is great, the drawings are very realistic, and the pace is great.

Goblin Slayer is all about a silver-ranked adventure that is out for revenge on goblins. As a child, his peaceful family life in a remote village was uprooted by an unexpected goblin attack. He managed to hide under the floor while seeing his sister get abused and murdered by a horde of goblins. Years later, his taste for vengeance is not satisfied in the least, our anti-hero saves a novice adventurer on her very first quest priestess out of a goblin nest. Goblin Slayer has no interest in glory, fame, or riches. All he wants is vengeance on the monsters that destroyed his life.

There are a couple of requirements for me in order to deem a manga similar to goblin slayer. First of all, I want a realistic fantasy story. Not a happy one, everything will be fine. I want a dark fantasy story with a complex hero that blurs the line between good and evil. I would like to see a decent amount of moral dilemmas, and I don’t mind emotional deaths. Preferably, our MC should also have a female sidekick that strongly contrasts but complements our (anti) hero. Also, I always try to include a couple less popular or pretty unknown manga that I think deserves a lot more attention.

Contents hide
10 Manga like Goblin Slayer that are similar and entertaining
1. Berserk
2. The Strange Adventure of a Broke Mercenary
3. To You, The Immortal
4. unOrdinary
5. Claymore
6. Kokou no hito
7. Golden Kamuy
8. Isekai Tensei Soudouki
9. How to Build a Dungeon: Book of the Demon King
10. Übel Blatt
Related Posts:

10 Manga like Goblin Slayer that are similar and entertaining

Berserk is about a lone warrior named Guts. Born from the hanged corpse of his mother and raised by the abusive mercenary Gambino, he joins a mercenary group called The Band of the Hawk, led by Griffith. In the background there is a major Hundred Year War against the Tudor empire.

Berserk is similar to Goblin Slayer in the sense that you get a one-man against the world feeling. I also love how dark both mangas can be, while also having very funny and casual scenes. GS has a more Dungeons and Dragons feel to it than Berserk, which is very much like dark souls in a way. The setting is medieval Europe and features monsters like demons and elves. The story can be very deep and complex and has a lot of interesting moral dilemmas for the amazing MC. All in all, it is no wonder the Berserk manga has sold over 60 million copies, of which 1.2m in North America, so far!

2. The Strange Adventure of a Broke Mercenary

Also known as Kuitsume Youhei no Gensou Kitan is about Loren´s mercenary group of soldiers that has been torn apart and destroyed. He, being one of the scarce survivors, decides that he wants a change of pace. He wants to become an adventurer and make a living traveling and using his sword skills for coins. However, as many freelancers amongst us know, it can be quite hard to get clients. When he was about to call it quits, another female adventurer asked him for help.

Just like Goblin slayer, we have an MC who isn’t stupid or inept. He is strong, but not the strongest. The characters have likable and strong personalities. Loren is strong and having massive debt, no real retirement plan and is forced to take a job that underpays him, Loren is living the millennial experience in a fantasy world. His female companion and the relationship with her is pretty similar that Goblin Slayer has with the priestess.

Also called To Your Eternity, is a manga series about an immortal creature named Fushi. He is a shapeshifter that is able to take multiple forms like wolves and boys and lives amongst humans in order to understand what it means to be human.

You might be surprised why a story like To Your Eternity is on this list. The reason is, while not having killing and revenge as its main themes, it is similar to Goblin Slayer due to the fact that they are both stories about finding one’s true self. The entire manga often reminded me of the themes both stories had in common, but it took a completely different approach in how to tackle those themes.

It is not often that I feature a webtoon in my recommendations, but I recently came across this one, and it is pretty good! The story is about a group of students at an elite school. In this school, the single most important thing is one’s ability. Those with more power and greater abilities get more job offers, better benefits and so on. Having the right powers is important too, unfortunately, some have no special abilities at all. John is one of those people who has none of those powers and is deemed a cripple. He defies this social hierarchy, much to the chagrin of those around him.

So why is this webtoon like Goblin Slayer? The story features a protagonist who has his own will. He does not care about those around him and what is deemed to be right, just like killing goblins when you are a silver-ranked adventurer, our MC defies expectations. Both stories have an MC that seems much more capable than they first let on and surprise their surroundings. Just like GS unOrdinary is a great underdog story with a hero you can root for!

Clare is a hybrid being, who is born out of a human and a demon-like creature, a Yoma. Being a claymore her goal in life is to fight the Yoma, a shapeshifting demon species and avoid letting her own Yoma side take over her being. She travels the lands far and wide looking for these Yoma before they can make any victims.

The Claymore series is one of the most underestimated dark fantasy manga around. It is very similar to Goblin Slayer as both protagonists have a dark past and a single focus on one monster that they must destroy, even if it costs them their life. The story is also a realistic fantasy tale. People die and aren’t magically saved minutes later. Claymore also has an anime, though I STRONGLY recommend you to get the manga as they are amazing.

Kokou no Hito or The climber has nothing to do with fantasy at all! Though, it is one of those mangas that I think are underrated and actually are pretty similar to most weak to strong MC stories. Our protagonist rarely speaks a word and is focused on a single goal. Climbing. Buntarou Mori is a very solitary person who falls in love with the sport and devotes his entire climbing career to climbing higher and higher. He wants to climb the almost insurmountable K2.

There is also a major psychological undertone to this manga that often gets overlooked in GS but is crucial to the plot line. If you are in the mood to read a great manga, that isn’t fantasy but is still very much similar to Goblin Slayer, you can´t go wrong with Kokou no hito.

Golden Dōga Gekijō takes place a short period after the war between Russia and Japan in the early 20th century. Our protagonist, who is a hero of that war, works as a planner to help out the family of a fallen comrade. One day he is approached by a man who tells him of a legend of gold that can be found by following a map of tattoos on the bodies of some of Abashiri prison escapees.

The Golden Kamuy manga is a lot like a Japanese western. The story is action-packed, grim, and interesting. It has a great story and it keeps you hooked on every single page. Our main character has a lot in common with the personality of Goblin Slayer when interacting with his female side-kick. It is hard to explain why the two manga are similar, but the pacing, feeling, and art just feel very much alike. Even if you don’t agree with me, Golden Kamuy is one of the best mangas you will ever read and I strongly recommend you give it a try!

Our main character is a noble of the Mauricia Kingdom, Baldr Cornelius. The strange thing about Baldr is that his body is inhabited by three souls. His own, the soul of a former commander during the warring states area Oka Sanai Sadatoshi and an otaku with a love for animal ears Oka Masaharu.

The manga is great at building a world and explaining the kingdom. It has original magic and the story progression is believable. There are a lot of combat scenes and dialogues in the manga that reminded me of Goblin Slayer. The premise of the story is also unique. I don’t know any other manga from the top of my head that where an MC has three different personalities.

9. How to Build a Dungeon: Book of the Demon King

Our protagonist is a man who craves power like nothing else. At the end of his life, he achieves the role of Demon king. He starts his reign with summoning a succubus with the name Lilu and makes her his loyal servant. After this, he starts building his dungeon, which he envisions to be an underground kingdom filled with monsters, humans, and other races.

This is a dark mature fantasy series that is similar to Goblin Slayer in the sense that the protagonist of How to Build a Dungeon is almost the perfect antithesis. If someone told me the story was set in the same universe, I wouldn’t doubt it for a second. The world where the story takes place is very interesting and complex. Our main character is strong and evil. There is also a very good light novel that I recommend you to read if you like the manga.

Our MC is Koinzell, a half-human child living in a medieval fantasy world. He has a large scar on his left eye and has only one goal in mind. Vengeance on those who betrayed him, the seven heroes of the land. Koinzell is a prodigious swordsman who holds the title of Blatt Meister.

In true saving the best for last fashion, Ubel Blatt is a must-read manga series. The fact that this manga does not have an anime yet boggles my mind. Just like Goblin Slayer, our protagonist is an anti-hero that has only a single thing on his mind, revenge. This Seinen story is an example of dark fantasy done right. The pacing is great and there are 24 volumes in the manga. So if you want to read a completed story that keeps you on the edge of your seat with a dark twist, Ubel Blatt is exactly what you need to read right now!

Are you looking for more manga recommendations, then you might love 10 manga like The New Gate! If you want me to make more suggestions for you to enjoy, don’t hold back and send me a message via the contact page!