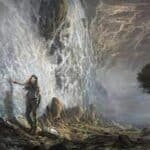 It’s that time of the week again! Time to take a deep dive into an underrated DnD spell. This week, we are taking a closer look at Wall of Water in 5e Dungeons and Dragons. This spell is one of my favorites to use as a dungeon master, and after reading this guide, you will surely know why.

If you enjoy reading about spells that aren’t used very often but can have a massive effect on the battle of the game, I recommend you check out the article on the spell Feign Death. This is another awesome thing to use that has so much more potential than most people realize.

In this guide, I am going to explain to you how Wall of Waterworks in 5e. After that, I will explain to you what makes this spell so good and what downsides it has. I will also give you some examples of using it as a player or as a DM.

What is wall of water in 5e

In a nutshell: a Wall of water is a level 3 spell that requires one action to cast. It has a range of 60 feet and has a verbal component, a somatic one, and you will need a material, in this case, a drop of water. The spell is a concentration spell and can last up to 10 minutes.

An in-depth explanation of the requirements

Here is some more information on the spell and what all of this information means or implies.

Spell level: To cast a wall of water, you will need a level 3 spell slot. You can assign it to a higher spell slot too. In that case, the spell will be more powerful.

Casting time: Casting this spell will take you 1 action. This is your main action for this turn. You can still do your bonus action and movement action if you choose to spend your action casting this spell.

Range: The range of the wall of water is 60 feet. This is pretty decent for such a spell. The range means you can hit most of the targets with an average speed before they can reach you. For example, helmed horrors have a speed of 30 feet.

Verbal: The spell has a verbal component. This means you must be able to utter audible sounds. You can not cast the spell if your mouth and/or voice is constrained.

Material – Wall of water requires you to have at least a drop of water to cast the spell. This can be any kind of water. So you can use something special like holy water too if you want to.

What happens when you cast wall of water

So, imagine you start saying the words, make the hand movements and get out your drop – or more – of water. A water wall will start to conjure where you point your hands as long as that point is within range.

The wall will be up to 30 feet long, 10 feet high, and a foot thick. You can also make a wall in the shape of a ring. This ring can be up to 20 feet in diameter and 20 high. Just like a normal wall, it is one foot thick.

The wall has an interesting mechanic that makes every ranged water that enters or hits the wall have a disadvantage on the attack roll. Next to that, the damage you take from fire is halved if a fire spell-like create bonfire is hit by the water wall.

The coolest effect happens when a spell that causes cold damage passes through the wall of water. When that happens, the area where the spell passed through will be frozen solid. The area that gets frozen solid is at least 5 square feet. A section has an AC of 5 and 15 hit points. To destroy it, you will need to get it to 0 hit points. The section will collapse and won’t fill with water.

Which classes can use wall of water

The druids have this on their spell list. No wonder, since they are pros at calling on the elemental forces to vanquish their foes. They do not claim any ownership over the powers of nature but see themselves as an extension of them. This is why druids are also amazing at casting spells like life transference to heal party members.

This also won’t come as a surprise, but sorcerers can cast wall of water. They use their mastery over the cosmic forces to call upon the powers of the universe. Thus, the sorcerer has a massive amount of raw magic at its disposal.

It is no wonder that these supreme magic-users have access to this marvelous spell. Their magic can change the course of the battle, and they can conjure monsters and elements from other planes to aid them in battle.

Of course, you can also create a Homebrew class with specific built and cast spells like this.

The pros and cons of using this spell

There are a lot more ways to use wall of water than you might think at first glance. I have compiled my 7 favorite uses below this chapter so make sure you read on.

The spell really shines at slowing down people or objects and defending yourself against fire spells. I also like the fact how you can conjure an ice wall if you have another player that can use ice spells. You can also summon a planar ally that uses ice spells to aid you before you cast the spell.

The spell is great to protect you and your party from ranged attacks, and even more so if those attacks are fire-based. Melee attacks will also have quite a hard time reaching you as soon as they can.

While there might be better all-around defensive spells, the niche use can come in very handy if you play your cards right.

You can also go Moses on your foes and give them only a narrow path to you. This way, they can not overwhelm you as easily.

This is quite a major con for any spell. Concentration means that you can not use any other spell, or this one will be canceled. Therefore, you need to plan accordingly if you want to keep this spell up for a long time. The 10-minute duration, even if you concentrate, is also not very long.

The wall of water is great against fire, ice, and ranged attacks. However, the wall is not very long, nor is it very high. So a flying fire dragon can just go over or around it. The spell is also useless against melee attacks or attacks that cause status conditions like poison.

The 7 best uses for wall of water 5e

Fire and water don’t go together, and when they clash, fire draws the shorter end of the stick. So next time your Dm sends a fire elemental – or a fire dragon – your way, just hit it with a wall of water.

Ranged attacks get a disadvantage in the roll when there is a water wall between them and the target. However, since the wall is so large, you can stop massive volleys of arrows.

If you have an ally or a familiar that can use ice spells, I strongly advise you to freeze some parts of the walls. Those parts can likely survive 1 or 2 hits that would sort of hit you otherwise.

Do you want to travel a large body of water? Well, just fire off your wall of water and make sure you can cross it in a few seconds.

A wall of water is very large and can be used to slow down a horde of undead enemies. You can also create a filter to make sure monsters can not overwhelm you.

You can use a drop of water to cast this spell, but you can also use holy water. So get those vampires at a disadvantage with this spell.

Is there a house burning? Crops that caught fire? This spell can protect your party or stop that fire dead in its tracks for up to 10 minutes.

How to Homebrew wall of water

While this spell is already pretty powerful if you use it well, there are some things you can do to make it optimal for a homebrew game.

One of my players had the idea to first conjure piranhas on dry land and then cast a wall of water. So now every monster or NPC who wants to traverse the wall has to handle being bitten by piranhas too. Another great idea I have seen is hiding a conjured water elemental in the water for a sneak attack.

Another less extreme homebrew idea I have used for a campaign I DM’d was the following: I noticed my players were using fire attacks, and I conjured the wall. One of my players fired another fireball just to test the amount of water. What I did was raise the temperature of the wall due to the heat of the fire spell. Everyone who wants to pass the wall won’t just be delayed but also be damaged by the near-boiling water.

There are a ton of niche uses to use wall of water in 5e. However, I think this spell is one of those underestimated moves that both a DM and a player can make to change the course of battle.

The fact that the spell is so large and gives you the possibility to stop ranged and fire-elemental enemies in their track is so useful. You can also freeze the wall if you want to have another layer of defense for your party.

Nobody is stopping you from homebrewing the spell and making it a bit more powerful and useful in a greater variety of situations.

Frequently asked questions about Wall of Water in 5e

Question: What do you need to cast wall of water?

Question: Is the wall of water a good spell in 5e DnD

Answer: The spell is great in some niche situations. I have given 7 uses in this blog that will definitely help you to make great use of this spell. However, I think the spell is most useful when you are fighting a ton of enemies or getting attacked with ranged attacks. If you figure out a way that allows you to use it to its full potential, this spell can swing the tide of battle!

Question: Can creatures drown in wall of water?

Answer: In theory, yes, creatures can be drowned in the water. However, the wall is only 1 foot thick, and you can transverse it. So you will need to have a special method to keep the creature you want to beat in its place. Keep in mind that some creatures have a larger lung capacity than others or are able to breathe underwater. Ask your DM how long a creature is able to go without oxygen before relying on this for your fight.

Question: Can you freeze the water wall?