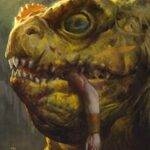 When I finished university, I never thought I would be writing a 1500 word guide on Giant Toads in Dungeons and Dragons. However, since I’m at home with nothing to do, what better way to spend your time. If you for whatever reason are planning on sending Giant Toads at your players, here is the ultimate how-to about these creatures.

I will tell you, using my years of Dungeon Master experience, how you can use these creatures and, for players, how you can fight them. The start of this article is aimed mostly at beginning DnD’ers who just want to have some info on this monster and what the stats mean.

The second part is aimed at Dungeon Masters. Here I will give you some ideas on how to use Giant Toads in 5e as encounters. These are all scenarios I have used myself in the past, so I know they work and that they are a ton of fun.

Contents hide
What are Giant Toads?
Giant Toad Stats
Giant Toad Abilities
Actions
How to use this monster as an encounter
Day out in the swamp
Wildshaping as a Druid
Water ambushes
Giant Toad 5e FAQ
How big is a Giant Toad 5e?
How to get out of a giant toad?
Can you Wild Shape into a Giant Toad as a Druid?
How does Giant Toad Swallowing work?
What is the loot?
Related Posts:

What are Giant Toads?

Giant Toads are a large beasts, mainly found in swamps. While the creatures look very similar to their counterpart, they are up to 6 feet larger and weigh over a thousand times more at 250 pounds.

This creature is often found in groups, but it is not uncommon to come across an individual toad. This happens most often when they are on the hunt. Unlike the regular toad, these monsters are not satisfied with mere insects and plants. Much like the Giant Poisonous Snake – their natural enemy in the wild – feast on small to medium-sized mammals and giant fish and turtles.

Armor Class: The AC of this monster is 11. This is a bit lower than that of for example the Crag Cat. 11 AC is on the lower side of monsters that are challenge rating 1.

Hit Points: The Giant Toad has a massive Hit Points pool. They 39 Hit Points, if you want to make it a bit more random you can use 6 d10 dice and a +6 to determine the Hit Points.

Speed: The speed of this monster on land is pretty slow. They can only go 20 feet per turn. Which is way below average in DnD. However, they are pretty fast in the water. There they can swim up to 40 feet per turn.

If we look at the above table, we see some of the worst stats there are. The weaknesses of the Giant Toad are very obvious. They have some of the lowest Intelligence and charisma stats I have ever seen. However, that is not as useful as you think. There is only one class that has a consistent arsenal of spells that force an INT throw. That class are Mystics and they aren’t used in the DnD core.

The creature does not have a lot of obvious strengths. It is clearly one of the weaker Challenge 1 monsters. The Dexterity is alright, so it might be able to doge long range attacks like Ice Knife when it explodes. The Strength is okay too, but doesn’t cause a problem, just like its 13 (+1) constitution.

Amphibious means that the monster can breathe air and water. So it can stay submerged for as long as it likes to.

Standing leap gives the toad a long jump of up to 20 feet, and a high jump of up to 10 feet. This is regardless of the fact if the monster had a running start or not.

This creature has two actions, and one of these two might make this creature a pretty unique and challenging encounter for your players in your next campaign. The first action, is nothing too special. The creature can bite you. This is a melee weapon attack that has +4 to hit and has a reach of 5 feet. This does 6 piercing damage or 1d10+2. The bite also has a 1d10 of extra poison damage.

When you get bitten by the toad, you need to make a DC saving throw. If you do not escape by doing a saving throw, you are now grappled. The toad can not bite again for as long as it is grappling a target.

Swallow is amazing. The toad makes a bite attack against a Medium or smaller target that is being grappled by a previous bite, and if the attack hits, it is now swallowed. When the target  swallowed, the following happens:

The target is now both blinded and restrained. It can not take any damage from attacks outside of the toad. However, different from a spell like feign death, the target still takes damage when inside the Giant Toad. Every time it is the monster’s turn, the swallowed target takes 10 (or 3d6) acid damage.

Only one target can be swallowed at a time. You can escape the toad when the creature is no longer restraining you. This is when it has died. When you exit the mouth, you use 5 feet of your movement, and you exit prone.

When your player exists prone, and you have a backup toad ready

How to use this monster as an encounter

Day out in the swamp

An obvious one, but I just don’t see enough Swamps in DnD campaigns. I get it, there just aren’t enough awesome swamp monsters. However, this is a good monster to introduce your players to a swamp battle with some unique mechanics like swallowing. These are one of the weaker CR1 monsters, so they aren’t too crazy to fight against, definitely if you compare them to Crag Cats.

Wildshaping as a Druid

As a druid, you can Wildshape into quite a lot of monsters. One of these is the Giant Toad. If you turn into one of these, you can swallow targets. These can be your own party members. Since you can swim fast and breathe underwater, this can be a great way to smuggle them somewhere or pass a swamp.

However, you can only swallow one target, and that target takes acid damage every turn. So make sure you think this through.

I love ambushing players. For some reason, both new players and veterans really seldom do perception checks and always expect obvious fights. Even when they need to take a raft or swim through a body of water, half of the time nobody thinks for a second and realizes how dangerous this is.

The world of DnD is full of monsters and the water is murky. The Giant Toad can swim fast, can stay underwater indefinitely due to his amphibious ability. It is the perfect monster to just lay in weight and attack and feast on these non-expecting adventurers.

How big is a Giant Toad 5e?

According to the official DnD Hand Books, this is a Large Beast. The size of the Giant Toad 5e is about 2.8 meters long, and it can weigh up to 210 kg. The tongue of the monster is also gigantic, up to 5.5 meters long. They are a great deal larger than the Giant Frog.

How to get out of a giant toad?

If you want to get out of a Giant Toad and break free, the best way to do so is by killing the monster. As far as the official rules go, this is the only way to get out. Once you have escaped out of the corpse, you lose 5 feet of your movement and are prone.

Can you Wild Shape into a Giant Toad as a Druid?

Yes, you can wild shape into one quite easily, since this is a level 1 CR creature. There are two requirements to do this. You need to be a Druid with the ability to Wildshape, and you must have seen this monster at least once.

How does Giant Toad Swallowing work?

The mechanics of swallowing are in three steps. The first step is that the toad bites the target. When the target is bitten it must make a DC saving throw, if it has failed this throw the target is now grappled. When the toad bites down on the grappled target again, it has now swallowed the target, which will now take 10 acid damage per turn. To get out of the stomach of the creature after being swallowed, it will need to be defeated.

What is the loot?

There is no official loot for the Giant Toad. I give my players’ meat, skin, and sometimes some jewelry like gold rings and necklaces with gems. They find these little treasures in the stomach of the monster. The reason I give for that is that they have swallowed adventurers and digested them. However, gold and gems don’t dissolve into acid easily and that is why they have this as loot.