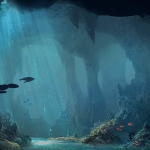 Whatever flows by the river comes as they go. River encounters offer plenty to the imagination as you can involve both natural and manmade problems for your players. The river also makes an excellent path for the party to follow as they embark on their adventure. Have your ideas rush through along with these waters to make for a great adventure.

Contents hide
General Information about rivers in 5e
River Encounter Creatures in 5e dnd
1. Giant Eel
2. Troll
3. Kuo-Toa
River Encounter Locations
The Great River Rapids
River Town
Best River Encounters
1. You Shall Not Pass
2. Row Your Boat Gently Down the Stream
3. Under the River
4. The Path Not Taken
5. Looks Are Deceiving
6. The Ice Age
7. The Spirit of the River
8. A Job Well Done
9. A Good Catch
10. Revenge Served with Water
Advice and final thoughts
Related Posts:

General Information about rivers in 5e

In the fantasy world of Dungeons and Dragons, rivers can be more than just a natural feature of the landscape. They can be a source of adventure and peril for players traveling the world.

River encounters can include encounters with hostile creatures who make their home in the water, challenges posed by the river itself, and opportunities to interact with interesting characters who live along the banks.

With its unpredictable currents and hidden depths, a river can be a challenging and exciting environment for players to explore. Whether fording a shallow stream or braving the rapids of a wild river, river encounters can provide players with a unique and memorable experience.

The bigger, the better for the Dungeon Master. Eels are not only limited to seawater but are native to freshwater as well. As a Dungeon Master, you can use this creature to add interest if the party ever visits an underground river, where this creature may potentially lurk.

Trolls are great creatures to use for classic scenes like river bridge tolls and fairytale settings. However, their giant stature makes them an intimidating opponent to be against. Additionally, their Regeneration trait adds difficulty to the encounter as trolls can regain ten hit points at the start of their turn.

Kuo-Toas is a fun race of humanoids found around water sources worldwide. They are an interesting race to work with, as they can create their Gods despite not being the brightest fish in the pod.

This gives the Dungeon Master plenty of room for the imagination. The party can still use their cleverness to trick the Kuo-Toas into creating a pseudo-God or even trick them into making their own.

The Great River Rapids is known for its rushing waters and creatures fighting to find harmony with its pace. If you want a fun action piece for your players to venture out with, the Great River Rapids offers plenty of excitement for the party. With the adrenaline of rafting through the river, as Dungeon Master, you can create exciting action sets for the players.

A town that thrives on the rich resources of the river, a river town can be an interesting area for the players to explore. You can create storylines where the town conflicts with outside factors that may threaten them, such as flooding, dangerous water beasts, and such.

Or you can even bring the issues within the village, such as a conflict between rich and poor. This conflict can be over resources or pollution due to overpopulation damaging the river.

1. You Shall Not Pass

A group of trolls has taken over the only bridge across a dangerously fast-flowing river. The trolls demand a toll for the passage, a very high price to pay, or it will threaten them and their lives. The party must decide whether to pay, try to fight their way past, or figure out another passageway to cross the river to continue on their journey.

2. Row Your Boat Gently Down the Stream

Upon a quiet ride down the river, it seems like there is no danger ahead. However, as they travel down, a sea monster swimming is stalking them as it swims right under the boat. The sea monster is in an attempt to capsize the boat and drag the party members into the water to get its meal of the day.

A small village built on stilts over a shallow part of the river. The villagers are friendly and take kindly to weary travelers, but they are being terrorized by a giant serpent living in the river’s deeper waters. The party must help the villagers by hunting down the serpent.

4. The Path Not Taken

Following along the riverside, the party comes to a fork in the river and must choose which path to take. One river branch is calm and peaceful, but the other is turbulent and dangerous. The party must weigh the risks and rewards of each path before making a decision.

The party stumbles upon a group of merfolk who live in a hidden grotto under a waterfall. The merfolk are curious about the party and invite them to explore their underwater home. However, the merfolk have a dark secret that the party must uncover. In actuality, the merfolk feed on human flesh and are trying to fool the party so they can strike.

The party has discovered a bandit camp on the banks of the river. The bandits have been preying on travelers who use the river as a means of transportation. In addition, they are notorious thieves and solicitors. The party must decide whether to confront them to have them pay their dues or try to sneak past to safety. Check out our Arctic encounters 5e guide too!

7. The Spirit of the River

A circle of druids who live along the river and worship the water spirit. The water spirit blesses the river with its abundance and keeps it flowing. The druids offer to guide the players downstream, but only if they agree to help protect the river from pollution and other threats. If the players cause discord upon the river, they will wreak dire consequences on the river spirit.

A water elemental has been angered as it has been disturbed by a group of contractors trying to create a dam and disrupt the river. The spirit will not find peace until the contractors have been put to a stop. With the stakes being a safe passage across the river, the players can play either side with the contractors or the elemental.

The players come across a group of amateur fishermen who seem to have a lucky but not-so-lucky catch. They have caught a giant, man-eating fish in their nets. Unfortunately, the fish is still alive and thrashing about, causing chaos on the river. The players must figure out how to safely capture or kill the fish before it causes more damage.

A coven of hags is trying to do a ritual at the riverside. Little does the party know that through their magic, they’ll transform the river into a colossal water monster to flood a nearby village. The hags plan to show spite to the village for excommunicating them from their own home. It is up to the players to fight the hags and stop them from rising water.

River encounters offer storylines that are as much as the river’s branches. From creating colorful natives to the river to making exciting action pieces, there is much to explore when using a river for your next encounter.

Feel free to use the length of the river if your player chooses to follow along with it, as you can use various ideas and creatures on both the land and the water. This is a great area to explore for beginner Dungeon Masters, as there is plenty of material to use when creating river encounters. Let your ideas flow through along with this!