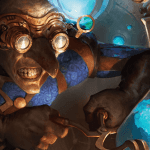 Are you in the mood to add some randomness to the attacks of your sorcerer? Chaos Bolt 5e is a great spell to hurl at your enemies and get some damage from a long distance. This article will guide you through how to use this attack and the best uses to throw a wrench in your Dungeon Masters plans.

Our expert, DnD player Justin, will teach you all there is to know about this spell and the best uses and answer some FAQs about Chaos bolt in the 5th edition of Dungeons and Dragons.

What is Chaos Bolt 5e?

As you see, Chaos Bolt does not require a material component for you to cast it. So as long as you can move your hands and speak audible noises, you can use the spell.

When you cast a chaos bolt, you hurl a mass of chaotic energy at a creature within your chosen range. The attack is a ranged spell, and on hit, it will take 2d8 = 1d6 damage. Therefore, you should choose one of the 1d8s and use it to determine what damage type the bolt will be.

IMPORTANT: You roll the d8s first, and then pick one out of those 2d8s to determine the damage type of chaos bolt! So you often have two options of damage to choose from! You don’t have to pick first and then roll; you can pick after doing your rolls.

These are your options

This spell can be upcast. If you put a chaos bolt in the second slot, add a 1d6 to the damage. Then, for every slot above the second, add another 1d6 per slot.

Note: if you roll the same number on both d8s, the chaotic energy hits a second (different) creature. You need to do a new attack roll and damage roll. If the d8s are the same again, pick a new creature for the chaotic energy to jump on. You can do this indefinitely as long as the d8s are the same and you choose different creatures. The same creature can only be hit once per cast of chaos bolt 5e!

So, you want to use the spell creative? As you might have noticed, everything that is somewhat random can be changed into a game of chance. For example, chaos Bolt uses two dies for damage; thus, you have about ¼ chance (a bit lower due to the fact two numbers can be the same) to guess the correct damage type before throwing. So you can use this fact to make it a game of chance and bet with NPCs on what will happen. A lot more flashy than your average bets!

Give the house an edge and make a rule that when the two numbers are the same and there is only one damage type to pick from, an auto-win for the house.

Do you feel lucky, punk? Well, the Chaos bolt has a slight chance to hit two (or even more) targets if the two d8s show the same number. So this can be used as a hail mary if you are in trouble and are getting rushed.

Of course, this can also be used in some kind of puzzle where you must consistently hit things with spells. This might not happen a lot as a player, but if you are a DM and you have multiple NPCs with the Chaos Bolt spell in their arsenal, you can have a ton of fun hitting your players.

Against monsters with multiple immunities or weaknesses

Are you fighting NPCs with many immunities, or are you strong against most of your damaging spells? You can use the Chaos Bolt to bypass these immunities. You can choose the damage type after a roll, so odds are one of the two will be a damage type that the monster has no immunity against. If you are lucky, you might hit them with a chaos bolt they are weak against for a nice extra bit of damage.

Can you have a crazy sorcerer if he doesn’t even know how to use Chaos bolt? If you want to introduce your party of players to a crazy PC or want to roleplay as a magic madman, you will get a ton of fun out of this spell. It is excellent for anyone who wants to roleplay as something or someone aligned with chaos.

Most people will pick Magic missile or witch bolt over Chaos bolt in 5e DnD. No wonder, as both are probably better spells. In addition, they do more damage and hold up longer as you level. However, the Chaos bolt is much more fun to use as it is not 100% reliable and has much more randomness to it.

For Dungeon Masters, the same principle applies. Of course, your NPCs will be more vital with a magic missile or witch bolt, but using this quirky spell will be a lot more fun.

Chaos Bolt vs. Chromatic Orb: Which one is better?

Chromatic Orb is better than Chaos bolt. Chromatic Orb deals more damage on average, will hit more consistently, and gives you more control over your attack. Finally, unlike Chaos bolt, you can twin Chromatic Orb.
However, our weird spell has a couple of advantages. First, the chaos bolt is free to cast and does not have a 50 gp material component you need to waste to release it. In my opinion, it is also a lot more fun than chromatic Orb.

When do you choose the damage type for chaos bolt 5e?

You choose the die for your damage type for chaos bolt after rolling your two d8 dice. A lot of players make the mistake of picking a die before they roll the die. That is incorrect and makes the spell weaker than it is.

Can you upcast Chaos bolt?

Yes. You can optimize chaos bolt 5e by upcasting it. You simply add a d6 for every extra slot above the first. Unfortunately, this is not worth doing. The damage does not justify losing higher spell slots for this bolt.

Is chaos bolt worth picking?

Yes, if you want to have a sorcerer with a bit of randomness to it without compromising too much on the account built, you can pick this spell. However, if you want to optimize your character, there are better spells like Chromatic Orb. In addition, chaos bolt has a few things that are not working in its favor. For example, the damage is low, and you can not twin the spell.

Chaos bolt is a great spell. Using it is a lot of fun and can do severe damage if you are lucky. Unfortunately, many players use it wrong by picking the die first. Instead, you need to select the die after rolling. So you often have two different options for your damage, which can help you exploit weaknesses and avoid the immunities of monsters.

Next to doing a good amount of damage to multiple targets, the spell is fun to use for other things. For example, you can use it as a betting mechanism, introduce a crazy NPC as a dungeon master, and just try to get a lucky shot on multiple targets.

Make sure you understand the rules about when to pick damage, and you will be alright when using this spell.