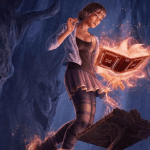 You might plan to play a DnD adventure like Hoard of the Dragon Queen and stumble upon the term ‘ranged spell attack.’ However, if you are new to DnD or are DMing for the first time, you might be unfamiliar with what exactly this is and how it differs from other (ranged) attacks.

This guide will explain exactly what a Ranged Spell attack in 5e DnD is and how you can calculate them. Our DM has made it as easy as possible to understand, so even complete beginners can follow the explanation.

What is a ranged spell attack 5e

The short answer is: that a ranged spell attack is an attack with a spell from a long range.

The more extensive answer is as follows. Two ways to determine if a spell attack will hit the target or not.

How to make a ranged spell attack + example

So from the previous example, four factors are relevant when calculating the ranged spell attack and whether your spell hits the target.

D20: we know what this is, the 20-sided dice you use for all your attack rolls and the ability checks. Some DMs have specific rules if you roll a nat 20 or a nat one on your roll. These rules should be discussed in session 0.

AC + their spellcaster modifier: Finally, we have the AC, or Armor Class, of the target. You can find the stat in the monster manual. Let’s take the Cult Fanatic as an example. They have an AC of 13 (leather armor).

Here is an easy-to-follow example. Your level 1 Wizard has his eyes locked on a Cult Fanatic and wants to hit it with a Fire bolt. Here is what you need to do step by step:

Your ranged spell attack thus calculates at 16. If your target has an AC of 16 or less, your spell will hit. If it has a higher AC, you will miss the spell. So in the case of a Cult Fanatic with an AC of 13, you will hit.

In this example, the minimum you need to roll with your d20 is an 8 to hit the target. All other stats are fixed during this fight unless you level up or have items/effects that change them.

Imagine your next monster is on a Guard Drake who has 14 AC. You roll a 5 with your d20. Add your INT and your Proficiency bonus. That means you have a Ranged Spell attack of 10. So your attack misses and does no damage.

In this example, you must roll at least a 9 with your d20 to hit the Guard Drake.

When do I make a ranged spell attack?

Is a ranged spell attack the same as a ranged attack?

In 5e DnD, a ranged attack is every possible attack done from a range and thus is part of the ranged category. A ranged attack can be made with a weapon or a spell. As long as the spell is done at a range, it is a ranged attack.

What if you roll a nat 20 for your ranged spell attack?

You will always hit your target when you roll a 20 when firing off a ranged spell attack. The other relevant modifiers are no matter the target’s AC or the number. In DnD, a natural 20 on a d20 during combat is called a critical hit.