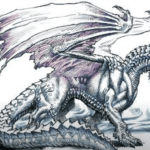 Are you looking for a fantastic CR 2 creature that is rarely used? The Guard Drake is an amazing DnD Monster for beginning players to fight during their campaign. In this article, we will teach you everything there is to know about these medium dragons and how to fight them. Of course, if you are a DM, you will get plenty of tips in this to write up to help you get the most out of Guard Drakes in 5e.

Contents hide
Guard Drakes Stats and Actions
Stats
Actions
How to best use a Guard Drake 5e
1. Give your high-level players or NPC a Guard Drake Pet
2. A cool story hook for a quest about dragons
3. Guarding ruins and treasure
4. Hunting down the Cult of the Dragon
Chromatic Guard drakes and what they do
Guard Drakes creations
Final advice and tips
Guard Drake 5e FAQ
Can you have a Guard Drake as a companion?
What is the challenge rating of a Guard Drake?
Related Posts:

As you can see, this monster has a ton of STR and CON to work with. However, it also has two glaring weaknesses. The INT stat of the beast is very low, and the CHA is also not all that good.

The Guard Drake has a couple of actions you should remember while fighting it. These are not too strong, but you never know when they will surprise you.

As you see, there is not a lot of danger or crazy mechanics coming from a guard drake in 5e. They aren’t very dangerous for a CR 2, but make sure your frontliners don’t underestimate them and send them to under-leveled players.

How to best use a Guard Drake 5e

1. Give your high-level players or NPC a Guard Drake Pet

A very common request from players is if they can have a Guard Drake as a pet. Be careful, as they are pretty strong monsters to give to lower-level players. There also is the fact that they are still wild creatures with very low intelligence. So they won’t act like a cute house cat that always loves you.

There is another problem with having a Guard Drake 5e pet. They are bonded for life to the first creatures they see when they hatch. While that does not mean they are automatically aggressive to everyone and anything else, they will always pick that creature above anyone or anything that came later into their lives.

Tip: Check out our article on Pseudodragon familiars.

2. A cool story hook for a quest about dragons

Guard Drakes are some of the weakest dragons around. They are perfect if you want to introduce a dragon storyline to your players early on. It would not be out of the question that there are Dragons who hate all those who slay or domesticate weaker dragons. Thus if your party kills or domesticates a Guard Drake, they might invoke the wrath of a sentient elder dragon who sends minions their way to punish these adventurers.

As the name implies, the Guard Dragon is used as a guardian for places and has enough intelligence to be used as a kind of watchdog. Since they are fiercely loyal to the first creature, they see and can be trained rather easily to follow commands. Moreover, these creatures are territorial and have excellent vision.

They are fantastic if your villains have the budget and the manpower to employ these creatures. Thanks to the fact that there are different variants, you can make guard groups that cover a wide array of damage types to make it harder to defeat them.

4. Hunting down the Cult of the Dragon

The Guard Drake is closely related to the Cult of the Dragon, which extensively used these creatures. They created these in a ritual and used them as guardians or combatants.

So if you want to introduce an awesome cult in your story, having your players abduct a pet Guard Drake by accident might be‭ a great way to do so.

Ps: many cults used these beasts, so you don’t have to pick the Cult of the Dragon.

Chromatic Guard drakes and what they do

A ritual creates the Guard Drake. For this, an original dragon will need to have 10 lb of scales given freely. The dragon can choose to give the scales to an ally or a servant to sell them or create them themselves.

Next to the scales, you will also need fresh meat and an iron cauldron. Finally, the color of the scales will determine the speed, abilities, and resistances of the drake (see chapter above).

After a couple of days, there will be an egg in the cauldron, which will be in just a few hours. Whoever feeds the Guard Drake first will become its master. Then, in just three weeks, these drakes reach full maturity.

Guard Drakes in 5e DnD are not very strong but can be quite a menace in groups if they have the right resistance. However, thanks to the fact that rituals create them, a bigger story is almost always going on when you fight one. They can be sent by a mad wizard, a cult, or created by elder dragons themselves.

These creatures look uninspired at first glance, but a good DM can use them to set up a few story hooks at the beginning of a campaign. Check out these guides that might help you on your adventure:

Can you have a Guard Drake as a companion?

Yes, you can. However, the best way to have one is by hatching the egg and feeding it in the first person. You don’t need to do the ritual; buying a Guard Drake egg and being there for the baby drake is more than enough. However, you can also adopt an adult one, but these will never be as loyal.

What is the challenge rating of a Guard Drake?

Despite their low stats and abilities, these have a challenge rating of 2. All variants, red, green, white, blue, ‭and black Guard drakes, all have the same CR. However, they do have different resistances.