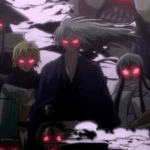 I know you guys are excited to watch anime with such themes, so, without any more delay, let’s get started.

Make sure you check out the following list too: Manga where MC is not human

Contents hide
8. How Not to Summon a Demon Lord
7. That Time I Got Reincarnated As a Slime
6. Demon Lord, Retry
5. The Greatest Demon Lord is Reborn as Typical Nobody
4. The Saga of Tanya the Evil
3. Nura: Rise of the Yokai Clan
2. Overlord
1. Devilman: Crybaby
Related Posts:

8. How Not to Summon a Demon Lord

On number 8, we have How Not to Summon a Demon Lord, a comedy, fantasy, and ecchi anime that is loved worldwide. The only reason behind its popularity is its plot and cute waifus.

The anime revolves around the story of Takuma Sakamoto, a gamer who does nothing but lock himself in a room and play games (OMG, he’s me). Sakamoto may be a loser in his real life, but in the fantasy world of Cross Reverie, he is considered the most ruthless and frightening player.

He has leveled up the Demon King Diablo to its max that players fear matching against him. But one day, Sakamoto’s ordinary and boring life turned upside down when he was isekai’d into the game world as Diablo.

But that’s not all. Two beautiful girls who summoned him tried to cast a magical spell on him so he could become their servant; the spell backfired, and now both are his servants.

Woah, our MC is living the best life out there. Watch this anime right now to follow the adventures of our MC.

7. That Time I Got Reincarnated As a Slime

That Time I Got Reincarnated As a Slime is an action, adventure, comedy, and fantasy anime and this anime has the best characters ever possible.

The anime tells us a story of a 37-year-old man named Satoru Mikami. Satoru was living as an office employee and was pretty much happy with his life. But one day, in the dark streets of Tokyo, an unknown assailant stabbed him, and Satoru died.

But as soon as he died, the real story started. Instead of dying, Satoru was reincarnated in an unknown magical world as slime, and this time, he was born with some tremendous magical abilities and powers.

Many people aim to rule society after acquiring power. Still, our MC decided to build his society; to do so; he immediately started gathering the right people for it. The show is exciting and gives us many reasons to watch it. So what’s the wait for? Go ahead and start watching this medieval fantasy anime.

Demon Lord, Retry is an action, adventure, and fantasy anime that will surprise you with its isekai and game-type theme.

The main plot revolves around the story of Akira Oono, an intelligent man who works and manages an MMORPG Infinity Game. He also created it, but when he decided to shut it down after 15 years, things went upside down, and Akira was isekai’d into the game he made. It was exactly midnight when Akira was transported into the game, and on top of that, he was in the body of Hakuto Kunai, the game’s Demon Lord.

When he saw a little girl being chased by a demon, he immediately rescued her, but as a game creator, he does not remember creating the girl as well as the demon. Things were getting confusing, and our MC decided to investigate this world. He took the little girl Aku with him and embarked on a journey to unleash the mysterious secrets of this world.

5. The Greatest Demon Lord is Reborn as Typical Nobody

The Greatest Demon Lord is Reborn as Typical Nobody is an action/fantasy anime. It tells the story of Ard, a Demon Lord who forcefully reincarnated himself into a modern world with the hope of living an everyday life. But, average is not a good word for our demon king.

Tip: Check out the best anime where everyone thinks that the MC is weak.

Although he reduced his power and magical abilities to average, he still was the most overpowered person in this world. In addition to being overpowered, he was handsome, and literally, every girl wanted to be his girlfriend/wife (my man out there is living the dream life of almost every Otaku).

I know things are already crazy, but our MC was getting offers from the royal family to become the next king. How can Ard live in such an environment? All my man wanted was a peaceful and ordinary life, but his luck was not working. So what is he going to do now? Find out by watching this anime.

4. The Saga of Tanya the Evil

This anime is set in an alternative world where the time of World War 1 is shown. It revolves around the story of a little girl named Tanya, who everyone in the anime fears because of her cold and ruthless behavior. There is a psychotic soldier reincarnated in this little girl’s body, and he controls her. Moreover, this world is filled with magic, giving Tanya more room to practice her craziness.

Tanya may look like a little girl, but her powers and abilities will make you tremble. If you are looking for an anime where the MC is reincarnated as a demon lord and has a ruthless personality, The Saga of Tanya The Evil is perfect.

You might also enjoy top 8 anime where a boy is reincarnated into a girl.

3. Nura: Rise of the Yokai Clan

Nura: Rise of the Yokai Clan is an action anime filled with supernatural entities. It tells us the story of Rikuo Nura, a high school guy who is both a human and a supernatural entity. He belongs to the Nura Clan (the most renowned and feared clan). He was chosen as the leader of that clan, but instead of following the traditions of his clan, Rikuo decided to live his life as a human.

He goes to high school during the day, but his appearance changes at night. His fun life soon changed when his family members became the target of evil Youkai. He can’t simply sit and see his loved ones getting killed, so he decided to carry on his grandfather’s legacy.

Watch this anime to witness our MC’s true power and strength. Furthermore, this anime has amazing fighting scenes that you would surely love.

Overlord is an action, adventure, and fantasy anime that has ideally used the isekai element throughout the anime.

You may have seen numerous isekai anime with an overpowered MC, but if you have not seen Overlord, then you have seen nothing. It revolves around the story of Ainz Ooal, the most overpowered character in anime history, and his obsession with conquering different parts of the world.

You may have seen heroes with huge followings, but have you ever seen villains with huge crowds? I am sure you have not. Although Ainz is a villain, he is still respected by thousands and has his army. He simply does whatever he wants, and no one is strong enough to stop him. If you love watching isekai anime with an overpowered MC, then you can’t find anything better than Overlord.

Make sure you check out our top 19 light novel like Overlord.

On the number 1 spot on our list, we have Devilman: Crybaby, an action, horror, and sad anime that will make you cry with its plot. However, this anime’s fantastic animation is one more noticeable thing.

The anime revolves around the story of Akira Fudou, a weak and hopeless guy who has always lived a life of misery and pain. One day, Ryou Asuka, the childhood friend of Akira, presented the idea of uncovering the mystery of demons, and Akira immediately agreed to do that.

While doing the research, Asuka was attacked by a devil, and in a reckless attempt to save his childhood friend, Akira merged up with a demon and became a devilman. Akira has now gained a tremendous amount of power, but he has the same cry-baby heart. So how will Akira spend the rest of his life now that he has merged with the devil Amon? Watch the anime to find out.