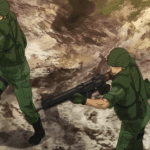 Without any further ado, let’s get started with our list.

10. The Ambition Of Oda Nobuna

On Number 10, We have The Ambition of Oda Nobuna, an action, comedy, and romance anime themed around war. It follows the story of Yoshiharu Sagara, a guy obsessed with the Sengoku Era and warlords. However, his life changes drastically when he mysteriously travels back in time and finds himself in a world filled with wars.

Yoshiharu Sagara is a simple guy who worships boobs as they are the perfect realization of a man’s dream. He is fascinated with the Sengoku Era to the point he even plays games featuring warlords. Through a series of events, he travels to the past where warlords fought for territory, but to his surprise, the warlords turned out to be cute girls. As a result, he ended up serving Oda Nobuna, the leader of the Oda Clan. With this situation in place, Yoshiharu must use his extensive knowledge to help Nobuna unite Japan.

This anime is a mixture of modern and ancient military tactics, which is why it stands out from the rest.

Next, We have Blood+, a mystery, horror, and military anime with supernatural elements. Although it aired in 2005, it is still memorable for many people, probably because of its violent action sequences.

This anime plot revolves around Saya Otonashi, who fights bloodthirsty creatures to protect her beloved ones. At first, Saya leads an ordinary high school life, but things change when she finds out about her vampire origin. Saya belongs to the vampire race; thus, she can fight monsters using her superhuman strength and powers. However, she must suck blood to activate her powers. Eventually, Saya meets Haji, a man who offers his assistance to slay monsters and provide her with blood. Together, they join the Red Shield Organization and begin their dark journey of slaying creatures of the night.

How will Saya fight the countless creatures when her mysterious past still haunts her? Check out the anime to discover more.

On Number 8, We have God Eater, an action, sci-fi anime that perfectly depicts the modern military anime theme. But, unfortunately, it doesn’t have a manga because it is the adaption of a game having the same name.

God Eater features a post-apocalyptic world where creatures called “Aragami” wreak havoc on the earth. Humanity is on the verge of becoming extinct. Still, an organization called “Fenrir” is defending the remaining humans with the help of God Eaters, soldiers fighting Aragami using powerful weapons called God Arcs. Lenka Utsugi is an aloof guy bent on becoming a God Eater and killing Aragami. He passes the test and joins the God Eaters of Fenrir. He may not realize it yet but fighting on the frontlines is worse than he ever imagined. Lenka must train and become strong to survive and protect his fellows.

God Eater offers distinguished animation and seamless action that makes you an addict to it. However, you might find yourself emotionally overwhelmed after watching the finale.

Coming up on number 7, We have Kingdom, an action, military anime themed around Chinese mythology. This anime follows the story of a slave child who dreams of becoming a powerful war general with his childhood friend Piao. However, breaking the tragedic chain of slavery and fighting the cruel generals might be too hard for these kids.

Xin is the main protagonist of the series. He comes off as a hot-blooded individual who likes to settle things with a fist. Despite his apparent harsh personality, Xin is kind at heart. His childhood friend, Piao, ended up serving as a general in the royal palace, leaving Xin. Years Later, Piao returns to Xin in a miserable state and dies. Upon witnessing this tragedy, Xin sets out to change the very system of this world so that no one has to endure such pain again.

Kingdom comes with a splendid storyline and characters that will surely make you glued to your screen till the very end.

On Number 6, We have Attack on Titan, one of the most famous shows when it comes to modern military anime. This anime features a world where humanity lives inside giant walls because of Titans who once drove humankind to extinction. However, an elite military group called Survey Corps fights these horrific Titans outside the walls to ensure peace.

Eren Yeager is a young child living an everyday life inside the walls. However, his peaceful life soon comes to an end when a mighty Titan destroys the supposedly impenetrable walls and kills countless people in the city. Unfortunately, Eren watched his mother getting killed by the Titan while he couldn’t do anything to save her. From that day, He decided to kill Titans no matter what he had to go through.

Attack On Titan offers realistic battles and how soldiers constantly fight to escape their tragic fate, all while discovering the shocking reality of Titans.

Next, We have Vinland Saga, an anime depicting the barbaric nature of Vikings and how they are called warriors for a reason. This anime story revolves around Thorfinn, who spends his days wondering about the world beyond his small home. When he finally gets the chance to explore the world, he finds nothing but chaos and even loses his father, who died protecting him from mercenary Vikings.

Upon witnessing his father’s death, Viking blood in his veins kicked in, and he decided to get his revenge even if he died in the process. He ended up following the killer Askeladd, leader of a Viking group. Thorfinn may not realize it yet, but only despair is waiting for him at the end of his revenge journey. However, he might genuinely learn the meaning of being a warrior through this journey.

Vinland Saga comes with brutal fights and entertainment one could expect from a military anime.

Coming up on number 4, We have Drifters, an action, adventure anime featuring the most twisted and mighty heroes of different eras. The storyline follows the transportation of various past heroes to another world to fight evils threatening to destroy the world and its people.

Toyohisa Shimazu is a Japanese warlord obsessed with fighting people and serving their heads. He was supposed to die on the battlefield of the Sekigahara battle, but instead of dying, he finds himself transported to another world. To his surprise, he meets other past heroes like Oda Nobunaga and Yoichi Suketaka, who were also supposed to be dead long ago. Eventually, they find they are here to fight off people called Ends. However, fighting these powerful evils might be difficult even for history’s strongest heroes.

Drifters depict how much bloodshed and war man has provoked in every era. Drifters like Toyohisa exist to tell us how powerful humankind can be.

If I have to name an anime that is loved by all anime fans who love military and action themes, then Berserk is the answer. It features action, horror, military, and mythological aspects. This series follows the story of a lone man named Guts who embark on a journey of slaying dreadful monsters that wreak havoc on earth.

Guts is a man who believes the world is filled with selfish people driven by their interests. So he takes up his giant sword and sets out to slay evils in the world for those unable to defend themselves. He swore not to join any party, but fate had different things planned for him as Guts ended up joining the Falcon Guild after being defeated by its leader Griffin.

Guts made a close bond with the members of Falcon, but a sinister truth about this guild might break Gut to a level he never imagined.

2. The Saga Of Tanya The Evil

Next, We have The Saga Of Tanya The Evil, an action, military, and isekai anime depicting the story of an atheist who refuses to acknowledge God’s existence even upon seeing God’s powers. God challenged him and made him reincarnate as a little girl in a magical world while telling him to survive without asking for help.

Tanya Degurechaff is the reincarnated version of the man who defied God’s existence. Upon finding herself in this new world, she quickly decided to join the military ranks, and with her tactical knowledge and devastating strategies, she climbed up the ranks in no time. Although Tanya is not interested in fame and power, her actions have enabled the Empire to become one of the world’s most powerful nations.

Will Tanya ever win this one-sided fight against the absolute being called God or not? Check out the anime to discover more.

On Number 1, We have GATE, an anime featuring the clash between a modern and an ancient world. This anime features a contemporary world with a peaceful life. Still, the sudden emergence of an interdimensional portal called Gate puts the world into chaos as soldiers and armed personnel of another world invade the earth through the Gate.

Youji Itami, a middle-aged man working in the defense forces, took swift actions in the sudden emergency to save the lives of as many people as possible. Sometime later, the Government, recognizing Youji’s efforts, tasked him with the critical mission of establishing peaceful relations with the world on the other side of the Gate. With this important responsibility, Youji must take each step carefully, as a single mistake could lead to a never-ending war between the two worlds.

Gate has modern military themes that can satisfy all your burning needs for action and adventure.