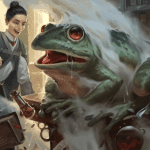 Adventurer, are you about to start a new campaign, or did your previous character perish? If you are reading this, you are probably researching how to optimize your (future) Eldritch Knight in 5e. In this article, we are taking a crack at ranking the best Eldritch Knight spells 5e DnD has to offer. We are including the official expansions but will not cover any homebrew magic.

When discussing defensive level 2 magic, there are few that match Blur. For Eldritch Knights, it is one of the best spells you can pick. Blur has little to no downsides, and if you are on the frontlines, I would consider it your most useful asset from a defensive perspective.

Blur 5e Effect: Your body becomes blurred, shifting and wavering to all who can see you. For the Duration, any creature has a disadvantage on Attack rolls against you.

I admit that I had an extremely hard time deciding between Blur and Absorb Elements. I personally prefer Blur as I consider it more useful in general. Some might disagree with me and say Absorb Elements is the best spell for an Eldritch Knight. No matter what camp you are in, you should have both. Absorb Elements is a level 1 spell that gives you many extra defensive options in certain fights.  This is a great counter if your DM loves elemental-based spells.

Absorb Elements 5e Effect: Absorb Elements absorbs some of the incoming magical energy, lessening its effect on you and storing it for your next melee attack. As a result, you have resistance to the triggering damage type until the start of your next turn. After that, the target takes an extra 1d6 damage to that element.

A conjuration that keeps coming back on lists like these is Misty Step. This is a great way to finish off our top three of the best Eldritch Knight spells in 5e DnD. While it is not a flashy spell, creative players get a ton of use out of this one.

The conjuration is also a fantastic option if you make a Bladelock build in Dungeons & Dragons. The fact that it is a bonus action is also excellent in terms of action economy and uses.

Misty Step effect: Briefly surrounded by silvery mist, you teleport up to 30 feet to an unoccupied space that you can see.

No surprise here, another spell focussing on being defensive and stopping incoming damage. The Shield is fantastic if you are planning to be one of the frontliners of our party, Eldritch Knight or not. It allows you to tank more hits and avoid getting to dip out when the fighting is getting a bit too rough. Don’t confuse it with other shield spells like the Shield of Faith.

The below effect also includes the triggering attack. Interestingly enough, it nullifies all damage from magic missiles too.

Shield 5e Effect: An invisible barrier of magical force appears and protects you. Until the start of your next turn, you have a +5 bonus to AC.

Fly is one of the most powerful spells for an Eldritch knight but also one of the hardest to get. That is why we are only putting it on our 5th spot in the ranking and not higher. While Fly has offensive abilities, you will mainly use it when you want to avoid being in a fight. Also, remember that if the spell ends, you can take quite a bit of fall damage, which is a downside.

Fly 5e Effect: You touch a willing creature. The target gains a flying speed of 60 feet for the Duration.

Like Blur and Misty Step, Haste is a staple for character builds who want to play defensively when using magic. Haste is a bit lower on our list as it is a level 3 transmutation that costs an action and materials. However, the effect of haste is pretty good, and you can use it in as good as any battle. You can also aid your characters with this powerful buff.

Haste also has some other small text you should read when using it.

One of the first genuine flashy spells on this ranking. Wall of Fire is an excellent spell for an Eldritch Knight that wants to make an impression when fighting. The wall of fire is potent and deals a good amount of damage if you use it correctly.

What I like most about this evocation is that it changes how the battlefield works and forces the Dungeon Master to think about whether to pass the wall or not. The wall of fire also works excellent when you are making an escape and want to deal chip damage, just like Create Bonfire.

The last couple of spells all has something to do with fire. This shared aspect is pure coincidence, so don’t start wearing your tinfoil hats just yet. Unlike Wall of Fire, Fire Shield is a much more defensive spell. When someone hits you with a melee attack, you can choose between a warm or cold shield that deals fire or cold damage.

I enjoy this spell on an Eldritch Knight, even if it is not an optimal choice for a level 4 spell slot.

Fire Shield 5e Effect: Whenever a creature within 5 feet of you hits you with a melee Attack, the Shield erupts with flame. The attacker takes 2d8 fire damage from a warm Shield or 2d8 cold damage from a cold Shield.

Let’s finish off with an influential damage-dealing classic in 5e. The Fireball in 5e is a staple for anyone with access to magic. Fireball shoots a large AOE spell towards the target that explodes on arrival. It deals a good amount of fire damage but is not as valuable on an Eldritch Knight as you might have hoped. I would suggest keeping your spells defensive as much as possible.

Fireball effect: A flame explodes where you have pointed. The flame erupts into a ball of scorching fire of a 20 feet radius sphere (which is massive). Every creature that is within range of that huge sphere of magical fire must now make a DEX saving throw.

Ps: you can also use the necklace of Fireball to cast it and avoid spending a spell slot. Your DM does need to be willing to give such a potent item to you, of course.

It is easy to deduct from the list above what kind of theme you are going with when choosing your magic. Eldritch Knight spells are defensive in nature. There are some examples, like the Fireball, that deal damage, but that is just one notable exception, and it is the last on our list.

For your Eldritch Knight, the best spells are those you can often use, work quickly and have a potent effect that can get you out of danger quickly or allow you to soak some extra damage so you can stay in the fight longer.