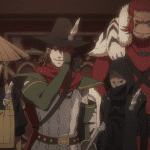 Hello everyone, I hope you are having a great time. Today, we are back with a bang, and you will love our today’s blog; let me tell you why. It’s fantastic to see an anime with a unique theme and plot, but have you ever seen one where everyone thinks the main character is a weak and ordinary guy? Watching an MC hiding his powers and then surprising everyone by revealing them is just so exciting and interesting.

You might wonder what’s the point of hiding power if you are strong enough, but that is the fun part. So if you are interested in such a category and want to watch some great anime where the MC hides his power or is mistaken as a weakling, fasten your seat belts and sit tight because this blog will provide you with everything you are looking for.

Without any further delay, let’s get started.

Sky Wizards Academy is an action, drama, and fantasy anime that takes us into a world full of action, magic, and, last but not least, beautiful women.

Do you guys hate insects? Except for cockroaches, I don’t mind bugs. However, witnessing a

Flying cockroach gets under my skin. You may be wondering why I am talking about bugs and all these things. The storyline of the anime, however, involves bugs. Not just bugs, but ones armed to the teeth and assault people. Do you think you could live in such a world?

Coming back to the topic, mankind is suffering a lot because of these wild insects. These giant bugs are so dangerous that mankind is forced to live in floating cities. The only person who can save humanity from this chaos is Kanata Age, a great guy who was labeled a traitor. How will he save everyone and prove his loyalty? Watch the anime to find out.

Concrete Revolutio is an action/drama anime with a perfect touch of supernatural elements. Its unique and exciting plot will surprise and keep you hooked on it till the end.

Concrete Revolutio is set in an alternative world where humans and superhumans live together. Furthermore, disguised aliens and other supernatural beings are wandering free, and a particular organization is formed to restrain these monsters from creating a mess.

The story gets more interesting when a leading government scientist and an industrial spy meet secretly, and Jirou Hitoyoshi is charged with secretly listening in on the conversation. The spy eventually blows his cover and exposes that he is an extraterrestrial. Jirou enlists the help of Kikko Hoshino, a magical girl and cafe waitress, one of many “Superhumans” who blend into society and covertly defend it from alien dangers.

Jirou works for the government organization known as the Super Population Research Laboratory, which is responsible for safeguarding the superhumans that protect mankind and eliminating any that are thought too dangerous to live in. With his exposed self, can Jirou continue to preserve the making? Watch the anime to find out.

8. The Disastrous Life of Saiki K.

The Disastrous Life of Saiki K. is a comedy/supernatural anime with a perfectly blended slice-of-life anime. This anime is well-known for its multiple genres, and Otakus worldwide love it.

It focuses on Saiki Kusou’s story and shows the awful experiences our MC has to endure every day (the title says it already). He is a high school student who possesses impressive psychic powers. He may not look like one, but with such abilities, he is the strongest man in the world.

Saiki wants to live a normal life like other guys and dislikes having powers, but no matter where he goes, he faces challenges, and to deal with them, he has to use his abilities. The Disastrous Life of Saiki K. is the ideal watch for you if you want something to make you smile.

Full-Time Magister is an action and fantasy anime with a pretty depressing plot. It is set in a magical world and revolves around the story of a guy who is tired of living a life of misery and pain. But unfortunately, Mo Fan’s life can not be any more challenging than it already is. His father is a poor man, and to make things even harder, nature gave him a disabled sister.

He joined a magic school to improve his miserable life, and that is when his luck began to alter. A person may only do one type of magic element at a magical school, but in the case of our MC, it was different. He hid the fact that he was skilled in two magical aspects.

Watch the anime to understand how Mo became a legendary overpowered character able to use demon elements and summon elements.

Noragami is another excellent action/fantasy anime on our list, and Noragami can easily make you a fan with its exceptional character design and plot with an MC that is a god.

Noragami is a great anime that tells the tale of Yato, a frightening and ruthless delivery god who demands 5 yen in exchange for completing your task. Yes, you heard correctly, but don’t misjudge him. His life was going fine, but things drastically changed when his partner grew tired of him and left him.

He became lonely, and there was no end to his confusing life, but when he met Hiyori, everything changed dramatically, and his life took a complete 360 degrees turn. Watch the anime to follow Yato and Hiyori on their exciting journey.

Tokyo Ravens is a rom-com anime, and what makes this anime even more fascinating is its action and supernatural elements.

Have you ever taken a shortcut to end your work quickly, but it backfired? Well, that’s what has happened with Japan in this anime. Japan tried to utilize a forbidden magic technique to gain the upper hand in a battle, but it backfired and spread demons and spiritual catastrophes over the country.

These demons are not just ordinary ones, so to restrain them from entering the human realm, an organization named Onmyoudou is formed. Despite being born into the Tsuchimikado family, one of the most renowned families in Japan, our MC Harutora Tsuchimikado could not perform any magic. But that’s what other people think about him. No one knows what potential and powers he’s hiding under his sleeves.

4. Chivalry of a Failed Knight

Chivalry of a Failed Knight is a fantasy, romance, and action anime with only one negative point about it; it only has 12 episodes.

This anime is set in a world where people can freely control their souls and use them however they please. People who can do that are referred to as Blazers. Ikki Kurogane, our MC, is an F-rated blazer that is a failure. He studies at Hagun Academy and tries to improve his abilities, but luck is not on his side.

Because of this, he was considered a weakling, and everyone made fun of him. Our unfortunate MC was once challenged to a duel by an A-rated Blazer, and he accepted the challenge. You guys tell me what would happen when a princess with experience fights a worthless guy. Although you’ll assume our MC will lose, we aren’t sure yet. He can surprise everyone by showcasing his skills at this important time. I strongly recommend watching this anime as it is filled with unique plot twists and much more.

One Punch Man is an action/comedy anime that is misunderstood as an overrated anime by many people but trust me, it is worth watching.

This anime revolves around a guy named Saitama, who has lost all of his hair because of the intense training he has gone through. However, he is happy even after losing his hair because now he is the strongest guy in the world and can easily defeat any guy. As for appearance, Saitama is an expressionless guy, always mistaken by others as a weak guy.

Saitama begins his journey by joining the Hero Association to help society and achieve his only ambition of becoming a hero. One-Punch Man is a fantastic anime that teaches us not to judge someone based on their appearance.

BTW let me ask you the legendary question of all time; If Goku and Saitama fight, who will win? Let us know in the comments below.

Death March to the Parallel World Rhapsody is a harem anime with isekai and reincarnation elements. This anime stands at number 2 on our list because of its excellent storyline and character designs.

The anime revolves around Suzuki, also known as Satou, a 29-year-old gaming programmer running to catch the train to reach his office and work on weekends. Still, things turned upside down when he decided to take a short nap after working day and night and fixing unlimited bugs. So he slept, saying “sleeping is his only freedom,” but when he opened his eyes, he was isekai’d into a different world.

He has to complete countless missions to live here because there is no way for him to return to his ordinary world. Can he adapt to this brand-new world? Watch this anime to find out.

1. The Irregular at Magic High School

The Irregular at Magic High School is an action, romance, supernatural, and sci-fi anime that gives us all the reasons to put it number 1 on our list.

This anime is set in the 21st century, where magic and technology are growing rapidly, and it’s all thanks to First High School (a school that explicitly teaches students magic). However, this institution has one drawback: its discriminatory policies. They divide pupils into two groups depending on their grades: Blooms (Top Rank) and Weeds (Lowest Rank).

The main story revolves around the life of two siblings named Shiba Tatsuya and Miyuki. They both are enrolled in this school, but their life is not easy as it appears.

Tatsuya is the strongest guy, and the only reason he has joined a magic school is to protect her little sister from political warfare. But can he protect his little sister and hide his true powers simultaneously? Watch the anime to find out.