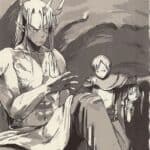 Looking for a good fantasy manga with an overpowered main character? Well, here you go! Here are the ones I think are the best and are still pretty underrated and unknown. I don’t think any of these have had a television adaptation yet, so they aren’t in the mainstream!

I made sure that every single manga on this list passes a few requirements. Creature College is a fantasy blog, so it needs to be in this genre. I am also going to try and avoid manga that has fewer than 50 chapters out.

Otherwise, your read is over in a couple of hours, and you are left hungry for more. Last but not least, our MC needs to be OP. It doesn’t matter if he doesn’t know it or is fully aware of it, but he needs to be stronger than those around him. He can go from weak to strong, or be overpowered from the start.

A demon lord threatens a fantasy world. 5 people get summoned to help the people of the land defeat this threat. Four of them become heroes, however the other is just a regular normal bystander.

As you might have guessed, this is a transported into another world kind of manga. Our main character is overpowered, but definitely not from the get-go. It is one of those fantasy manga with an MC who doesn’t know it yet but finds out very soon he is a talented dude and goes a bit crazy with it.

Despite being anti-social and arrogant, he is very intelligent and quite likable, for the reader at least. The art of the manga is very nice and detailed. The story is also interesting and enjoyable if you enjoy Isekai.

While it is not the best manga with an OP MC around, it is very enjoyable. At the moment, there are over 80 chapters of Konjiki no Word Master published.

Also known under the title LV999 Villager is a story about a world where most people are around level 1 to 5. Unless they go out in the world and fight monsters, they stay around this level. Adventurers who hunt monsters often have a role appointed to them by a deity. There are 8 such roles – or RPG Classes – Warriors, Fighters, Magicians, and so on.

The vast majority of those, in this world, do not have a role. They are powerless farmers, shopkeepers, blacksmiths, etc. They stand no chance against the monsters in this world. Our hero, at the ripe age of 2, notices that when you kill a monster you can earn wealth!

The manga starts off very strong and seems to be the prime candidate to be the best one on this list. As the title implies, our protagonist is overpowered as hell. However, after 30 or so chapters, the manga starts to fall off hard.

It still is a good fantasy manga with an op mc, but it just isn’t anything special. There are too many cliches and actions don’t seem to have real consequences. Perhaps that is just my taste, and you might like it a lot more than I did, so definitely give it a try if you have some spare time.

Our protagonist is an absolute beginner as a gamer. This is kind of a bad thing as the VRMMO he is playing is all about a system named ¨Sense¨. Each player of the game uses this to create a character that is completely unique to them. Due to Yun our MC not having any experience, his sense is horribly customized. Though, due to it being so bad he stumbles upon mechanics no other player has ever been able to use.

This manga seems to divide people into two camps. Either they think it is absolutely amazing or a horrible train wreck of a story. I am in the former camp, and I really liked it. The story is great, while not really original it is a fun weak to strong progression. There is also a ton of buying, selling and crafting. I really like it if we take a deep dive in the economy of a fantasy world. It is a great manga to relax and enjoy yourself.

Originally named Douluo Dalu, is a story about Tang San. A student of the secret martial art clan Tang. The disciples of this clan are famous for their strength and use of hidden weapons. Tang is not interested in this prestigious future. He chooses to forsake his life in order to obtain the forbidden lore of the sect.

Only one punishment fits this crime, death. Tang sees no reason to still be alive after having obtained this knowledge and ends himself. However, he gets reincarnated into a strange new world, as the son of a blacksmith!

Combat Continent is Chinese Harry Potter on shrooms. Which is a good thing! The story is very nice, the fight scenes are interesting, and the main character is very overpowered compared to the rest in this fantasy world. This is mainly due to him retaining the knowledge he has from his past life and using this to his advantage. The story is very enjoyable, and being Chinese fantasy, it is a nice change of pace.

Our MC Tagami Yusuke is led by a mysterious voice and finds himself summed in another world. Much like 90% of the fantasy manga of the last 10 years, this is an Isekai. Anyhow, Yusuke was a video game fanatic but when he arrives in this new world that goes by the name Caltsio he is a deity. An evil one at that. As the Evil God of Calamity, he has the power to create and customize whatever he wants.

The manga is set in an RPG world and is quite a fun read. Our hero is a god who is obviously overpowered and he knows it! The premise is quite mediocre, but how it is executed is brilliant. The hero explores the world and gets to learn more about the economy, the food and the characters are very fun. I loved the manga, and I am sure you will too!

This is a manhwa, the Korean version of a manga. In this story, our main character is Han Jihan, an average high school student that all of a sudden gets a special power. This is the power of the Gamer, which makes this world a game with levels, items and so on. He sees people’s power levels, their stats and magical items. However, the world is not what it seems and many people struggle for power and magical items of great power.

I love The Gamer, and it reminds me a lot of Solo Leveling. I love the story, and the first 50 chapters are some of the best ever in the genre. I have read them a couple of times because I just love the whole premise. The author however is his own worst enemy. He tries to create a very intelligent character, but he lacks the skills to do so. The MC goes from weak to strong and levels up like you do in a game, and there is nice progression in his power. You should definitely give The Gamer a try if you are looking for a fantasy manga with an op MC.

Kanata Tomokui was a strong man before he died, however, when he gets stabbed and dies he is reincarnated as one of the weakest monsters. A newborn goblin named Rou is his new identity. He is not an average goblin as he has retained the memories of his previous life. Moreover, he also has the ability to increase his power and gain abilities when eating foes and prey. Rou wants to live his life to the fullest this time and survive in this harsh world!

RE: Monster is such a fun read! It is one of the best and most underrated fantasy manga with an op mc that I have read. I love that the main character wasn’t a loser in his previous life, and is a nonhuman. The art of the manga is really cool and the MC becomes strong fast. He gets a leader role in his goblin tribe and following his evolution is a lot of fun. I think this manga will soon get an anime because it is so good, but for now, I think Re:Monster is the best fantasy manga with an op mc I have ever read!

If you looking for more manga with the badass main character, then check out these mangas like The New Gate.