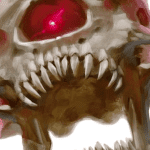 These mighty monsters are not for beginners but are best used as a demi-boss or a mid-campaign boss fight. In this article, we will discuss the stats and abilities of the Death Tyrant and answer a couple of FAQs on these creatures.

What are Death Tyrants 5e: Stats and abilities

The death tyrants are an undead form of beholders. They have kept some of their magical abilities and physical powers after death. These creatures are powerful and reasonably loyal to their masters and creators. For those reasons, they are often used as guardians of wizard towers, ruins, and dungeons.

The Death Tyrant is a Large Lawful Evil Undead.

The Death Tyrant has a central eye that emits an invisible cone of negative energy. The tyrant can choose at the start of each turn how the cone faces and whether that cone is activated or not.

All creatures in the targeted area of the negative energy cone can not regain hit points if they are in that area. If a humanoid dies here, they become zombies under the Death Tyrants’ control. The effect is thus similar to the impact of Finger of Death.

Eye Rays of the Death Tyrant

The Death Tyrant shoots three rays at random at one to three players within a range of 120 feet that it can see.

These are the ten options the Eye Rays of the Death Tyrant has and what the targeted creature must roll, and the effects when it fails the saving throw;

So, as you see, the Death Tyrant has many interesting strengths for the creature. Unfortunately, underestimating this creature can be quite costly for your party. A couple of rays can whip out your party or mess up your action economy completely.

A veteran party of level 6 players can handle a Death Tyrant with great difficulty if they have optimized built and have at least five members in their team. However, if you are DMing over a couple of newer players, I would wait to at least level 9 until sending one of this undead their way.

Try to spread out your group. Due to the negative energy cone the creature uses, multiple players in your group can be hit by this ability and not heal. You can avoid this by staying out of the range by spreading out as much as possible.

Buff your frontliners. If you have a Goliath Barbarian on the frontlines fighting, he might want to have a slight buff to his WIS, CHA, and INT stats to avoid some of the rays from walloping them. You can buff your players with a vast array of spells that help them survive the attacks of the Death Tyrant. An excellent option to buff these stats is by casting Intellect Fortress.

Have an escape plan. The Death Tyrant is a powerful creature. If you underestimate it, you might want to devise an escape plan before starting the battle. First, ensure you have some things ready to either slow down the monster or chip damage it when it is following you. Good spells to do that are Create Bonfire and Cloud of Daggers.

Make sure you have extra allies. There are a couple of exciting spells that you can use to increase the amount partners on your side that can take one of the three rays that the Death Tyrant is firing. In addition, you can use spells like Summon Greater Demon for a strong demon that can tank hits and deal damage.

Having an optimized build is also vital. Check out our article on Best Frontliners in 5e DnD to understand what is needed to make a character that can deal and take damage like a champ.

A Death Tyrant is often found around the ruins and towers of mighty wizards. Don’t just let your players loot these places filled with magical treasures and wonders. Instead, give them a challenge and make them work for it by sending Death Tyrants and hoards of guard Drakes their way.

The Underdark is filled with fascinating creatures that you might encounter. One of these is Beholders and their undead counterparts, the Death Tyrant. While the Underdark is not crawling with these, they do roam places that hold mystical powers and have a certain magical aura.

Why not send your players on an old-fashioned go-kill-that-thing-quest. Reward them and put a couple of plot twists in it. Going to the Underdark, fighting your way through hordes of weird monsters, and finally fighting one (or maybe two) Death Tyrants there. Ensure that the party is not underleved, or this quest might be the final one in the campaign.

The Death Tyrant is a foe you should not underestimate. The ten ways he can send your way combined with the negative energy cone is a lethal combination. Furthermore, due to the effect of rays like the death ray, you might lose your character here because you can’t heal or die when hit with one.

There are a lot of other factors in play when you are fighting these creatures. However, as a DM, you should remember that your players need to be strong enough to defeat it as a group. If they have to run, the odds are pretty high that they will die in the underground.

If you have enjoyed this guide, you might enjoy the following articles.