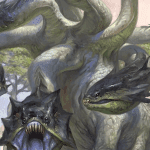 So, you just started a new ranger in DnD and are looking for the best spells. Are you looking for a good option that scales with your creativity and not just your level? Well, Ensnaring Strike 5e is a great option.

In this article, you will find out how to use Ensnare Strike in 5e DnD, what you should know about the spell, and what the best uses are. So let’s dive in and check if this magic is worth it for your ranger.

What is Ensnaring Strike 5e, and how does it work

As you see, this is a bonus action, and you only need a verbal component. So these are two factors that I like about Ensnaring Strike.

When you cast Ensnaring Strike, the next time you hit a creature with a weapon, thorny vines appear where the weapon touched the target. The target must now make an STR saving throw.

Note: Large and larger targets have an advantage on the STR saving throw.

While the spell has restrained the creature, it takes 1d6 of piercing damage at the start of each turn. When the vines restrain the beast, it can make an STR check again on the spells save DC to free itself. Other creatures can also alleviate the target if they can touch it.

It is possible to upcast ensnaring Strike. You must put the spell in a higher slot than the first one to do so. For every slot above the first, you can add a 1d6 dice of damage. So, for example, in the second slot, it deals 2d6 damage, and in the third slot, 3d6 of piercing damage per turn.

The main point of ensnaring Strike isn’t to deal damage but to use the restrained condition to its full potential. That way, you have an advantage on all attack rolls you make against the creature every time the ensnared creature attacks you.

You must remember that the spell can only be cast if you touch the creature. So you need to get close to your target to do so. A ranger has low AC, so make sure you aren’t taking a ton of damage when trying to get the spell off.

Another fun way to use ensnaring Strike is to add it to the repertoire of some monsters. The attack isn’t too strong and can quickly be dispelled. However, it does make an excellent spell for your homebrew monsters. You can annoy your players, give them disadvantages, and deal good chip damage.

Ensure that the creature is not too overpowered and destroys your party because it is unbalanced. Of course, you can always switch out a spell or an ability and give Ensnaring Strike 5e instead.

3. Debuffing creatures and characters with entangle

Hey, Ensnaring Strike is not a very good spell, so we are reaching a bit to get at least three decent uses on our list. If there is a monster or a character that is too strong and has Entangle, then you can switch it out with Ensnaring Strike.

Ensnaring Strike is much worse as you have to touch the creature, and it is not an Area of Effect spell. However, it is also straightforward to make the saving throw – and even more so if the creature has high STR and is of a large or larger size.

While Ensnaring Strike isn’t a worthless spell to get, there are much better options. For example, Entangle is a more potent AOE spell with fewer downsides.

Ensnaring Strike would not be my first choice on a ranger character, but the magic attack does have a couple of exciting perks. It is a bonus action, does decent damage, and only uses a verbal component. But, first, remember that you need to get close, which is a concentration spell.

If you are a Dungeon Master, you can use this spell to buff or debuff particular creatures. The spell can be added to pretty low-level monsters to give them more potency or used to replace entangle to make a weaker version of the creature.

You might enjoy our guides on Death Ward 5e and the Hold Monster spell.

Is Ensnaring Strike a good spell?

Ensnaring Strike is an okay spell but not your best option as a Ranger. The fact that it only traps a single target has an STR check, and is concentrated are all things that are pretty significant downsides.

To cast ensnaring Strike in 5e Dungeons and Dragons, you only need to spend a bonus action. You do not need to use your regular action, so you can attack and then use the ensnaring Strike to restrict your target and hit 1d6 damage.

What is better: Ensnaring Strike or Entangle?

Generally speaking, the Entangle spell is much better than Ensnaring Strike. This is because you can hit many more targets; it does not have the downside of having to hit your target first, and Entangle scales much better.