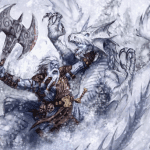 Do you enjoy not thinking and just smashing everything in your way? The Goliath Barbarian in 5e DnD is one of the most fun builts in Dungeons and Dragons if you want to fight things head-on. Unfortunately, despite this combo being so popular, there aren’t many excellent guides on how to use it optimally.

In this Goliath Barbarian guide, you will learn everything there is to know about playing with this race and class. We will also answer frequently asked questions and give you advice and tips to make the most out of it.

Make sure you also check out the following guides if you are trying to built the optimal DnD 5e character:

Why Barbarian is the best class for a Goliath

The best class by far for a goliath is the Barbarian. The only other classes that come close are the fighter and the Paladin. So, why is this the case, and are there any weak points to this combination?

Because the Goliath has a +2 STR and +1 CON for their ability scores, they get the edge over many other races when you want to build the perfect Barbarian. These bonuses are fantastic if you rely on raw strength in melee battles on the front rage. The strength bonus gives them tremendous prowess in the heat of war, and the constitution allows them to survive massive hits from enemies. Thanks to their extra racial features, they are the complete package for the barbarian class.

As you probably know, Barbarians in 5e DnD (and other editions of Dungeons and Dragons) have a rage mechanic that increases their damage in combat while boosting their resistances. These ability score bonuses allow you to invest a bit in DEX, so you can get extra perks like Unarmored Defense and Danger Sense. These abilities are fantastic for tank damage if you fight on the front lines.

Imagine a barbarian. What do you see? A hulking figure, at least an entire foot taller than anyone else, made out of pure muscle. The size, appearance, and overall demeanor of the Goliath make them the perfect barbarians from a roleplaying perspective. They are melee fighters on the front lines who hate cowards and weakness. They are intelligent fighters that know precisely when to fight and when to live to fight another day.

What is a Goliath Barbarian in 5e?

If one race is known to have the strength to pull off the barbarian class wonderfully, it is the Goliath. This race, known for its large size and power, is perfect for facing your enemies’ heads on the front lines.

Not all Goliath are bald; there is nothing in the lore that there even is a majority of baldies. However, the average member of this species can grow hair, have beards, chest hair, and a nice shiny bush on top of their head.

The Goliath is thought to be part giant related to them genetically. That is why they have stony growths in their body. These Lithoderms are bony plates that are considered to be linked to their shared ancestry with the stone giants. These do not appear in fixed places; some have them everywhere, while others have them just on their elbows or shins.

The Goliath barbarian is a fierce warrior who has little empathy for those who are weak and cowardly. While they detest or outright hate healthy adults who can work, fight, and leech off society, they take care of their sick, wounded, and elderly. This species prides itself on bravery and prowess in melee combat.

Their culture is somewhat limited as they have been limited by the scarce resources in their natural habitat. However, these creatures are pretty skilled in things like tanning, stitching, and, surprisingly, painting. Their paintings are colorful and expressive, often depicting combat and animals.

Goliath barbarian roleplay in a nutshell

So, how do you “have to” act if you want to play as a typical Goliath Barbarian? First of all, you need to show courage but also combat smarts. If you have a decent fighting chance to beat your enemies, you will try your hardest to do so. However, that does not mean you will fight suicidal battles just for the hell. An intelligent warrior knows when to quit.

Goliaths, and barbarians, in particular, fight on the front lines. They have seen some crazy stuff. Generally, they aren’t the most outgoing, happy-go-lucky crew to be around. On the other hand, though, they have a hilarious sense of dry humor. They are also pretty stubborn and competitive.

Being in a party of adventurers with a Goliath is a double-edged sword. On the one hand, they will gladly put their lives at risk for party members they respect, while they won’t give the light of day to those they deem cowards and weaklings.

So, what makes the barbarian the best possible class for a Goliath? Let’s dive into their traits and find out.

Ability scores: the ability scores for a Goliath are tailor-made for the barbarian class. They get a +2 strength bonus and a +1 con. Both of these ability boosts are perfect for barbarians.

Size and speed: These humanoids are known for their size. The average member of their species is around 7 to 8 feet tall and weighs approximately 310 pounds. In addition, they have a base walking speed of 30 feet.

Racial features: The Goliath Barbarian in 5e has some exciting racial features to make them robust and reliable in melee combat.

Tips and advice to make the most out of this building

The best class for a Goliath is the Barbarian. However, we have put together this list of tips for you to get the most out of this class.

Think about your armor

Goliath Barbarians don’t have a lot of choices for their armor. So you will need to invest a bit into DEX to ensure you can survive fighting at the front lines. Also, think about the possible Feats, Skills, and subclasses you can pick to make sure you have a high enough AC to soak up damage. Thanks to the rage mechanics of the Barbarian, you will be able to take a lot more damage, even when you have insufficient armor. However, depending on this perk, too much might prove fatal.

There are a couple of feats that make your Goliath Barbarian in 5e a lot more powerful. So make sure you at least consider using these.

Grapple: one of the most underestimated feats by beginning Dungeons and dragon players is Grapple. This feat improves your hand-to-hand combat and gives your allies a chance to deal some severe damage to your opponents. You need to have 13 STR, a given as a Goliath Barbarian in 5e.

Skill Expert: this feat adds a bonus of +1 STR and expertise. This +1 STR is great for a Goliath as you will deal more damage and have a more effective Grapple.

Heavy Armor Master: If you want to ensure you survive the frontline and intense battles that are not going your way, then this feat is pretty neet. Heavy Armor Master is an excellent pick for a Barbarian who is expected to be the party’s tank while on an adventure.

According to their culture, they have three names. As a Goliath Barbarian, you want to have a fitting name. Here are a few names you might want to consider for your character.

What is the best class for a Goliath 5e Dnd?

It is generally agreed on that the best class for a Goliath is the Barbarian. The reason that this class is the best is the ability scores and feats you get. The +2 STR and +1 CON are perfect for Barbarians. Some other classes are pretty strong, too (Fighter and Paladin); however, these just aren’t as optimal as the Barbarian class.

Is a male or female barbarian goliath 5e fun to play?

For some reason, you never see someone play Female Goliath in 5e DnD. That is quite a shame, as playing as a Female Goliath is extremely fun. They are pretty similar to the male version but with some slight nuances. They are just as brave, but they generally prefer to keep busy with children’s education and cultural activities like painting.

How tall is a Goliath in 5e?

Since this race is descended from Stone Giants, they are some of the tallest humanoids in Dungeons and Dragons. The average Goliath is between 7 and 8 feet tall. However, some can reach up to 9 or even 10 feet tall. Generally, the males are taller than the female goliaths. Those who become Barbarians are the tallest of all.