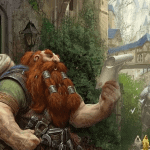 Ah, it is that time again. A new campaign, and you are starting your character creation from scratch. This time, you have picked to play as a dwarf. That leads us to the question: What is the best class for a dwarf in 5e DnD, and how do they compare with one another.

As you likely know, there are two kinds of dwarfs in Dungeons and Dragons: Hill and Mountain Dwarves. We will also quickly touch upon which class is best for which dwarf in 5e. Let’s dive in!

For the number one spot, there are no real surprises. All through fantasy, it is generally agreed that the best class for a dwarf is a cleric. In 5e DnD, it is a close call with the number two, but we are picking this class as the number one on our list today.

Thanks to the CON bonus from being a dwarf, you are pretty survivable and can heal yourself and your teammates without dying to an unexpected hit. You also get the perk that you remain to have the same speed when wearing heavy armor, further increasing your survivability.

The best subrace for this class is the Hill Dwarf. Thanks to the extra high WIS stat, you get much more utility out of the spells you have access to as a cleric. If you want to fight as a melee-focused cleric, then the Mountain dwarf is a slightly better pick.

Check out these three underrated spells to make your cleric even stronger:

So talking about melee-focused characters has brought us to the number two on our list of best classes for a dwarf in 5e Dungeons and Dragons. The Barbarian is an excellent choice for a dwarf. You have a nice bonus to your CON stat, and you get resistance to poison.

The Barbarian is thus an optimal choice for the class of a mountain dwarf. Furthermore, you deal more damage and are a much stronger barbarian due to the Strength bonus you get.

You can also pick a hill dwarf with a bonus to CON, but that won’t be as useful as the STR bonus you get with the other subclass.

A significantly underestimated pick for the best class for a dwarf in 5e D&D is the Paladin. This holy warrior thrives if you use a mountain dwarf. As one of those, you get a +2 to your STR and a +2 to your CON. Those buffs are fantastic for a Paladin and will carry you a long way.

Hill Dwarves are not a good pick for your Paladin, in my opinion. The WIS bonus you get isn’t helpful for a Paladin. While you can use it for the high perception, that isn’t useful if you have a good team. The +2 for the con is also helpful for the extra hitpoints.

We are going down to the B-tier picks for the best class for a dwarf in Dungeons and Dragons. The number four is a fighter. However, the fighter class isn’t wrong for a dwarf. You get a Con Bonus and the poison resistance so that you can fight up close.

The best subrace to choose for the fighter class is the mountain dwarf. You get +2 to your STR and +2 to CON. The Hill subclass is okay, but WIS isn’t sound all that useful for a Fighter in 5e.

On our number 5 is the Druid. I haven’t seen many dwarves choose Druid as the class they are going with, but it isn’t the worst pick you can make. While a mountain dwarf is pretty bad as a druid as you can’t use the STR bonus for anything, a hill subclass makes a surprisingly good Druid.

This is due to the +1 WIS you get for picking this subclass. You also get the occasionally handy darkvision. While Hill Dwarves make very descents druids, they make far better Clerics. You won’t struggle as a druid, but you won’t have the optimal built for a challenging campaign either.

Check out these guides to make a more powerful druid:

Okay, hear me out; dwarves make pretty decent rangers if it comes down. If you choose the hill subclass, it is a pretty decent team member, in my opinion, for most parties. However, suppose you are a DM looking for a surprisingly strong but very unconventional pick for an NPC mercenary or adversary. In that case, a dwarven ranger might be just what you need.

The Hill subclass gets a +1 for WIS and has +2 CON and Darkvision. Those are all pretty handy as a ranger. Admittedly, it isn’t optimal, but picking a ranger is much more potent than you would expect. A mountain dwarf also makes a decent ranger, as long as you have him be melee based.

We are finishing off our list with the Wizard class. These magic casters can always use a little more hit points to survive getting hit. However, Dwarves don’t get you extra INT points. So that is a very hard hit to your character optimization. While you can get a +1 in WIS if you pick hill, that isn’t that useful.

A wizard class is pretty good for a mountain dwarf. Unfortunately, you don’t get an INT, and STR isn’t all that useful for a Wizard. However, you get light and medium armor proficiency, making you just a little bit more as a spellcaster.

We just had to include the worst class you can go with if you are a dwarf. The bard is worse than the Artificer, Warlock, Sorcerer, etc. There isn’t anything positive to say about the bard class for this race. You won’t be able to fight at the front, the stats you get are bad for the supporting roles, and WIS is as good as useless. You can play as a Valor or Swords bard at most, but that won’t be any good.

A couple of classes play out great in this race, but the top three best choices are pretty straightforward if you get down to the details. In that order, the best classes for a dwarf in 5e DnD are the Cleric, Barbarian, and Paladin.

You do need to keep in mind what subclass you choose. For example, there are significant differences in the stats you get between the hill and the dwarven subclass, which switch the optimal class to choose from.

Remember that you don’t need to pick the super optimal, most efficient built to have fun; if you want to go crazy or be surprisingly strong in a non-convenient way playing as a fighter or even a ranger is pretty fun too.

Want to know more about optimizing DnD? Check out the best items for illusionist wizards!