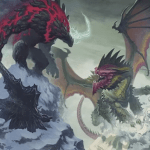 Come down from your magic tower and stop experimenting on goblins. This article will guide you in choosing the best 5e items for an illusion wizard in Dungeons and Dragons. Due to the massive amount of items in Dungeons of Dragons, you have almost infinite options to choose from. The scenarios you come across in this world are also uncountable. So this list will base the best items for illusionist wizards on overall utility.

The Cloak of Displacement is the best item you as an illusionist item can have. Not just is the cloak very useful for you, it also is right in line with the thing you are going for: illusions.

When you wear the Cloak of Displacement, you cast an illusion that makes it seem like you are standing just a bit off of your actual location. Any creature that attacks now has a disadvantage on attack rolls against you. In case you take damage, the effect ends until the next turn.

As an illusionist wizard, there aren’t many items as useful as the Ring of Spellstoring. This ring can store five levels of spells in it that can be used any time you want. As an illusionist wizard you never have enough spells at your disposal, so this item will definitely come in handy in almost every fight.

To store a spell, a creature can just cast a spell (that is up to level 5) into the ring by touching the ring during the casting of the spell. The spell is just stored into the ring and has no effect on the outer world until it has been cast out of the ring.

As an illusionist wizard, this is one of the best items to have since there are hundreds of spells that are under level 5. Often, if you niche down too much and have been fighting an opponent that just won’t fall for your illusions, this ring will be an amazing ace up your sleeve.

The ring of invisibility is amazing asset to have as an illusionist wizard. This item can turn you invisible as an action. You remain that way until you remove the ring again. Having this ring is extremely potent if you are an illusionist wizard, as this effect is right up your ally to buff your powers. However, you do need to be creative to make the most use of this ring.

It’s a great item for when one of your party members has been targeted by Enemies abound 5e. As you will dissapear from his line of sight, you will no longer be a potential target for his attacks.

The item rarity of this ring of Invisibility is legendary, so getting it is going to be quite the adventure on its own!

The staff of magi is one of those items every wizard has on its wishlist. This item is one of the best for illusionist wizards and other magic casters due to the high number of abilities it has. The staff can use a great amount of different spells, which can all come in handy. It also gives the wielder a +2 roll on attacks.

Getting the item is quite a pain, however. It is rare and legendary, and only a few Dungeon Masters (the inexperienced ones) want to give it out early. It has a ton of interesting spells like Conjure Elemental and Fireball which can help you out in a pinch.

Nobody wants to leave loot on the ground or pay NPCs to pick up items for them. The bag of holding is a great item for an illusionist wizard to mitigate the low carrying capacity they have.

A bag of holding can hold up to 500 pounds and is 64 cubic feet inside. The bag itself weights 15 pound. While this is not a specific item for illusionists wizards that they must have, it is useful enough for you to strive for and prioritize getting it.

The item rarity is uncommon, so you can pick it up pretty quickly in the campaign if you need one.

If it is the first time playing as an illusionist wizard, you better hope you have a Rod of Resurrection. The item is extremely useful, as wizards are pretty feeble and can die if you don’t know how to fight with them effectively. An illusionist wizard is pretty weak if you are fighting against a monster that can pierce through your illusions easily, so it is on our list of 5e items for illusionists.

A Rod of Resurrection can heal you with one of its five charges, and can also resurrect you by expending all the five charges. The rod regains a charge every dawn, and at 0 charges you need to roll a d20, if it’s one say goodbye to the rod.

The Necklace of Fireballs is great to make sure your wizard can pack a punch. The concept is pretty simple. Every bead on the necklace can shoot a single fireball. If you throw two beads you can upcast the fireball spell you are shooting with the necklace.

If you want to know more about the necklace of fireballs, make sure you read the linked article to find out why this jewelry is one of the best items of for illusionist wizards in 5e Dnd.

There aren’t many items in DnD as powerful as the ring of three wishes. For illusionist wizards this ring is another must have item for you to have if you want to cause chaos in the end game. This ring is game breaking and powerful, so not many DMs are going to give it out without you having to do some kind of insane quest.

As you might have guessed from the name, the Ring of Three wishes gives you the ability to make three wishes by using the wish spell. All you need to do is expend an action and bam, you have gotten yourself one of the most powerful spells at your disposal.

If you want to know more about making the most out of this item, you should read our list on how to use Wish best in 5e.

Last on our list of 5e items for illusionist Wizards to use in DnD is Daern’s Instant Fortress. A theme you see coming back occasionally on this list is the low survivability this class has. Daern’s Instant Fortress is powerful and 10x10d bludgeoning damage with a 15 DEX save on top of that. Meaning, breaking through this thing will take quite a while for just about any monster.

This fortress is a rare and wonderous item and extremely strong when used well. DUngeon Masters, don’t give this fortress to your party too soon as it can be game breaking in the right/wrong hnds.

There you have it our best items for an illusionist wizard to have in 5e DnD! If you are interested in getting yourself a stronger character in Dungeons in Dragons we strongly recommend you to check out the following underestimated spells!