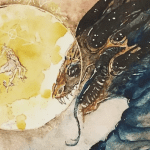 When building a specific character that relies on a particular mechanic, picking the optimal attacks and buffs is vital to make it work. In this article, our expert Dungeon Master Justin will guide you through the best spells for Bladesingers in 5e DnD. In addition, we will discuss magic attacks you should most definitely pick and spells you might have forgotten all about.

As you probably know, the best spells for Bladesingers and other classes depend on what your DM will send your way to fight. The ones chosen on this list are the best overall in most situations. Of course, there will be fights where none of these are the optimal choice, so see this as a guideline.

Haste is excellent to buff your party quite a bit. You choose one of your teammates in range, and then you give him or her double speed, +2 AC, and an advantage on DEX saves. They also get an additional action that they can use to attack.

If you have played challenging homebrew DnD campaigns before, you know just how vital action economy is. A well-timed Haste can switch up just about any fight.

One of the most overlooked best spells for a bladesinger in Dungeons and Dragons is Shadowblade. This magic is a level 2 concentration spell that gives you an ethereal melee weapon that is light, has finesse, and can be thrown. When you hit with it, it deals 2d8. It can also be upcast to a level 3 spell for 3d8 damage.

Being able to deal with psychic damage is massive. Unfortunately, many monsters are immune to non-magical weapons, and many DMs are stingy with them. So in many cases, this weapon is just what you need to give your party the ability to start dealing massive damage anyway. Shadow Blade also deals enormous amounts of crit damage when used correctly.

You also get the advantage in dim light when you are using a Shadow Blade. This advantage often comes in handy in a pinch when you are fighting in the twilight or in a deep dungeon.

Mirror image can make a Bladesinger almost untouchable. Whenever an attack gets through your player character’s AC, a mirror image typically takes the damage. Mirror Image is not a concentration spell, so it has a decent advantage compared to Blur.

The only thing that does make Blur better is the late-game content. When multi-attacking starts to become critical, it has a slight edge due to the better synergy.

I prefer to get Mirror Image to Blur. However, Blur isn’t a wrong choice for a Bladesinger wizard. You can always change to Blink 5e later, which is better than the both in the end game.

Shield is a must-have spell on your Bladesinger. It will add a ton of armor to your character and improve your survivability, which is a must if you are going for a wizard-like this one.

When you cast the spell, you have an invisible barrier of magic around you that protects you. Until the start of the next turn, you get +5 bonuses to your AC. That +5 is massive to tank a big hit coming your way. You also don’t take any damage from the Magic Missile attack.

While Shield does not sound super powerful on its own, it is a beneficial spell in the beginning stages of the game.

Another defensive spell you just can’t without is Absorb Elements. A bladesinger wizard can capture the energy coming towards him and lessen the effect. The energy he absorbs can then be used for a melee attack in the following turn.

This melee attack will do an extra 1d6 of damage. You can also upcast the spell by putting it in a higher spell slot and just adding 1d6 per slot above the first. A spell-like that is just fantastic is just fantastic at level 1.

I would strongly advise picking Absorb Elements as soon as possible if you want to significantly impact the fights you and your wizard are planning to have.

Your player character will have low hitpoints but very high AC. So you will need to be able to tank hits and avoid getting hit too often. That balance is why Shield and Mirror Image are so far up the list.

However, an often forgotten spell great for Bladesingers in D&D is Spider Climb! Spider Climb, as the name implies, allows you to move up, down, and vertical on surfaces like walls and ceilings while keeping your hands free.

Spider climb is excellent for escaping a sticky situation and avoiding getting trapped somewhere. You can use it in most buildings, in forests, and Dungeons. Only in open plains with no large rocks is the spell not useful. Creative players can also use this spell to set up traps.

Another fantastic spell to get out of trouble quickly is Misty step 5e. You can choose this spell as a 2nd level conjuration. This conjuration has a couple of unique perks for your Bladesinger to get out of danger.

The most obvious one is that the Misty Step is a bonus action, so you won’t have to use your regular activities for this to work. The second one is that you only need a verbal component. There is No need to waste materials here or have your hands free to cast it.

You can teleport up to 30 feet away with this spell, so you can escape quite a lot of tricky situations with a 2nd level conjuration.

Has there ever been a wizard-centered spell list where Fireball wasn’t on? Fireball is one of the most excellent spells for Bladesingers and wizards. Fireball is a lot more than a hard damage dealer.

This attack is one of the few AOE attacks that I would pick on a Bladesinger in Dungeons and Dragons. You can deal a ton of damage from long range, and there is always a use for it, no matter what kind of campaign your Dungeon Master is running. I sometimes see people recommending Vampiric Touch on this build, but they’re just no reason for that if you compare.

The best spells to combine with Contingency have quite a bit in common with the magic you can cast on your Bladesinger. That is why we have chosen to finish off the list with Contingency.

Remember that Contingency only shines when you are creative and know how to make the best out of this spell. If you have no experience with using a spell-like Contingency in 5e, you might want to skip choosing this one.

Make sure you read the list of best spells to combine with Contingency to find out if this spell is going to work out for you or not.

Let’s end this list with another defensive spell to ensure your Bladesinger can survive high-level and fast-paced combat when the opponents start to dish out a considerable amount of damage.

From a defensive perspective, Fire Shield is one of the best spells to get on a Bladesinger. The spell duration is 10 minutes, and you can choose between a warm shield and a chill shield. The generous Shield gives you resistance against cold damage and the chill shield against fire damage. Those are two of the most common damage types, so this will come in handy if you are fighting monsters stronger than fire snakes and ice elementals.

Fire Shield also has an offensive element to it. When a creature gets within 5 feet of you and can hit you with a melee attack, the Shield will produce a flame that damages the creature for 2d8 fire or cold damage.

Best spells per level for a bladesinger wizard in 5e DnD

Of course, you can choose more than the nine previously mentioned spells here. That is why I have put together a list of the best spells per spell slot for Bladesingers in 5e Dungeons and Dragons.