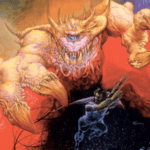 I love underused magic in DnD. As both a DM and a Player, using more obscure things in DnD can give you an advantage you should not underestimate. It also gives a nice change of pace since I have been playing Dungeons and Dragons for over 10 years.

In this Blink 5e Guide, I will give you a bit of insight on how to use Blink in your next campaign and answer some FAQs about the spell.

The guide is mainly aimed at beginners who are pretty new to DnD and people who want to do a build that is a bit more original than an over-optimized sorcerer or wizard. That is why I am going quite in-depth into some more basic info like what components of a spell are. I also have a chapter on (original) uses for Blink which is aimed at more veteran players and DMs.

Contents hide
What is Blink
How does Blink 5e work
Creative uses for Blink 5e
Defending yourself from a boss
Recruiting an ally
Teleporting up to 10 feet
How good is Blink 5e
Blink 5e FAQ
Do you keep concentration while you use Blink ?
Can a Warlock use Blink?
Creatures can use blink 5e?
Are there magic items that can cast Blink?
Can Blink 5e move through doors?
Final thoughts and summary
Related Posts:

Blink is a 3rd level transmutation spell. Transmutation is the school of magic that converts matter and energy. The school is all about altering physical forms and mental qualities and shaping reality to your will. If you are building a transmutation build, read the Magic Stone 5e guide for one of the best transmutation cantrips.

The casting time is one regular action. So you can still use your bonus turn or your movement turn when you used it.

The range for blink is self. That means that you yourself are the target of the spell. Some spells have the ‘self’ range too, but you can use them on other creatures if you touch them. An example of that is Encode Thoughts. However, when this is the case, it is stated explicitly in the rules.

The components are pretty straightforward. You only need a Verbal (V) and a Somatic (S) component. That means you need to be able to audibly say the words and your mouth can not be covered up, and you need to be able to move your hands in a way that you have a pretty large range of motions. If you can not do this, you can not use the spell. This is one of the spells that does not use any material components.

The duration of blink is only one minute. It is not a concentration spell, so you can use the spell to its full duration. The only ways to end the spell early is when you get killed or when you choose to end.

There are only two classes that are able to use this transmutation magic. The sorcerer and the wizard.

How does Blink 5e work

You start moving your hands and say the magical words to cast Blink. Make sure you grab your d20 because you are going to need it!

If the spell ends on your turn, and you are still on the Ethereal plane, you appear back in our material world. You can pick an unoccupied space to appear. This space must be within 10 feet of the place where you disappeared.

Note: if you want to dismiss the spell while the minute is not over, you will need to use a regular action to do this.

On the Ethereal plane you can still see and hear the place where you have anished from. However, you can only see the space in shades of grey (no, not that kind) and you are unable to see more than 60 feet away from the spot where you have vanished from.

The only way you can be affected while you are on the Ethereal plane is by monsters and magic in that plane. The reverse is also true, you can not affect anything that is not on the Ethereal Plane if you have used Blink.

Creatures on the plane you have vanished from can not perceive nor interact with you when you are in the other plane, unless they have an ability to do so.

Defending yourself from a boss

Blink gives you a 50% chance to negate just about any damage a monster can deal if you make a high enough roll. You need to roll an 11 or higher to ‘transport’ yourself to the Etherial Plane. When you are there, creatures that do not have the ability to interact with that plane are unable to interact or even perceive you.

That means a spell like Agonizing Blast can not hit you, a spell like feign death can not reach you, and the hoards of zombies the DMs lich has summoned with Animate Death can’t see you. In other words, you are practically immune to charm spells and damage from both magic, creatures and objects. The only notable exception is if the enemy has the ability to interact with the other plane.

It is hard to understate just how much of a useful defensive tool Blink is in 5e for mages. You are completely removed from any harm, even force damage where you are standing. To add to that, don’t forget the spell does not require concentration!

That means you might be able to recruit an ally from that plane. Of course, that does not mean that you are going to become friends with a being from the Ethereal Plane, but you might just entice it enough to join you in the fight by offering it something it desires.  It might be possible to combine this with a Planar Ally, but you will need to ask your DM.

Teleporting up to 10 feet

If you read the rules, you can find a little snippet that you might be able to use and abuse if you are creative enough. When the spell ends, you can pick a place within 10 feet of where you vanished to reappear. This space needs to be unoccupied.

That means you could sneak behind an enemy by using this as a 10 feet teleport if you vanished close to it. This is a great way to surprise a monster, and I am almost sure that your Dungeon Master will not see this coming at all.

Note: You can use Blink to teleport through doors, objects and even magical spells like Wall of Water. The only notable exception to this would the Wall of Force which has the effect that it completely blocks out the Ethereal Plane.

How good is Blink 5e

Blink is a much more useful spell than most people assume it is. Basically, it gives you an almost complete immunity during your turn against damage from creatures if you’re mage to roll an 11 or more on your turn.

That means there is no way to be hit by a volley of arrows, have an explosion hit you, have Cloudkill damage you or get targeted by a charm or mind spell. There is also the fact that it is not a concentration spell. So you can easily stack it with one, and you do not need to take into account the annoying mechanics of concentration magic.

The main drawback about Blink is that you have to put it in a level 3 slot. Those slots are pretty valuable at just about any point in the campaign, so you need to use them sparsely. There is a major opportunity cost, but it can be well worth it if you are playing with a DM that has a ton of boss fights in his or her stories.

In summary, Blink is a very powerful spell that is extremely situational and niche. When fighting with a boss, it will negate 50% of the damage that you are expected to take. When you use Blink well, you can avoid getting hit by just about any attack and it is one of the best defensive ace up the sleeve spells a mage can have if he is lucky.

However, due to it requiring a level three slot, it is a major investment and only worth it if you plan on fighting a lot of bosses. There is also the luck aspect, you need to roll 11 or more, so it isn’t a very reliable defensive spell for your wizard.

Do you keep concentration while you use Blink ?

Can a Warlock use Blink?

A Warlock can use Blink in 5e DnD. The only way to use this spell as a warlock is through the Mystic Arcanum of True polymorph. When you cast this 9th level spell, you need to turn into a monster that is able to cast Blink. However, there is no monster in the official rules in Dungeons and Dragons that can do this. So you will have to pick a Homebrew monster and ask your DM.

Creatures can use blink 5e?

There are no creatures in Dungeons and Dragons at the time of writing that can use Blink in 5e. In the official rules no monster or NPC has access to this spell. The only creatures that would be able to use blink are Homebrew creatures and monsters that have gained this ability because your DM says they have.

Are there magic items that can cast Blink?

There are no official items in 5e that can cast or be used to cast Blink. That means you will have to Homebrew an item yourself. Some ideas to go about this that I found interesting are Blink arrows. These arrows are able to move through the Ethereal Plane until they come close to the target. So they can not be blocked from afar. However, to balance this, I think you should roll your ‘to hit’ to a disadvantage.

Can Blink 5e move through doors?

It is possible to use Blink to move through doors, walls and other objects. These must not be more than 10 feet away from the place you have vanished, since that is the range of reappearing of the spell. The only exception to this would be the Wall of Force, since that explicitly blocks the Ethereal Plane that Blink uses to move through objects like doors and walls.

If you have a wizard character and your DM loves to organize a big boss fight that is challenging, and you don’t want to take the risk of getting hit hard, Blink is amazing. You have a 50% change to block out any possible damage or avoid annoying spells that mess with your mind or status.

There is also the interesting effect that you can teleport up to 10 feet with this spell, which unlocks quite a bit of potential for this spell in my opinion.

Blink is great to use in the following situations:

Do you have any questions about this guide? Feel free to let us know, and we will answer you as soon as we can!

If you are looking to read more about underestimated magic in DnD, I strongly recommend you to read more about Moonbeam. This ray of light, just like Blink, has some very powerful uses if you know how to use well and is one of the best long range spells to have for your Druid character in 5e!