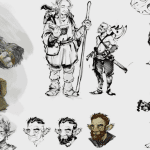 When you are building a new character in Dungeons and Dragons, you want to get it right from the start. Having a lousy build will hold you back for quite a long time. Today, we will discuss the best race for a monk in 5e DnD. We are going to look at both the conventional and the unconventional ones.

As a monk, you will need a good amount of DEX, WIS, and CON to ensure you survive the close combat encounters you will get into. So you will need to pick a race that satisfies that criteria. Here are the best races for a monk in DnD 5th edition for you to choose from.

If we are looking at the classics, I don’t think there can be any meaningful discussion about the fact that the Wood Elves make the best race for a monk in 5e. There is no other way, but the stats you get as a Wood Elf are perfect for optimizing your monk built. So let’s go a bit more in-depth about why the Wood Elves are the ideal pick to make the strongest monk possible.

The stats you get as a wood elf are perfect. You get +2 for your dexterity and +1 for your Wisdom, which is just what you need to hit the ground running.

There are a lot of other factors Wood-elves have going for them. You are reasonably fast due to the increased movement rate. Darkvision and you can hide outdoors with Mask of the Wild quite quickly also comes in handy. Finally, you can also access bows to give you some long-range power.

You also get all the essential features that make an elf so great when you pick the wood elves, so that is a nice additional boost.

Putting variant humans at the number two spot might be a bit controversial. However, the difference between wood elves and variant humans is pretty steep, so keep in mind that you are significantly downgrading with this race.

The reason why variant humans are the second-best race for monks in 5e, in my opinion, is because you can mold them so quickly. You can play around with the bonuses to make the character exactly what you want it to be. Humans also have a decent enough Dex to ensure your monk can do what he must.

You can also pick a feat at level 1. It can not be underestimated how powerful picking a feat at level 1 is if you choose it right. Now, to be honest, variant human monks start to feel slightly weak by the mid-game.

A very close third, and according to many, the second-best choice for a race for a monk would be the Tabaxi. There is one thing Tabaxi have going for them: their insane speed. Playing with a Tabaxi can be a bit hard for beginners that don’t know how to use movement speed to its optimal use. Tabaxi also has a decent Dexterity score, which always helps your monk build as the class strongly relies on this skill.

A bit more about the speed of the Tabaxi. This race has this thing named super movement. That doubles our speed, and you can combine this with the mobile feat. All in all, you can get a movement of 140 feet per turn. You can also combine this with a regular dash and step of the wind.

A Tabaxi monk can thus run 420’ feet in a single turn if he needs to. Going that far that fast is perfect to avoid spells and attacks from as good as any opponent.

We are taking a look outside of the player handbook for this pick. The Aarakocra is a very decent option for a monk. This race has a lot of things going for it. First of all, there is the fact that you get a bonus to DEX and WIS when you pick the Aarakocra to play with.

The only reason why the Aarakocra is not number 2 on this list, behind the Wood Elves, is because, at the mid-game, it starts to feel less exciting and not so powerful. However, there is one thing about Aarakocra’s that just does not get old, the Flying speed and the fact that they can fly.

Another excellent pick for the best race for a monk in Dungeons and Dragons is the Kenku. The Kenku have two fantastic bonuses right out of the gate. A kenku gets +2 Dex and +1 WIS, which are pretty amazing for Monks.

If you have read my write-up on the best class for a dwarf in 5e, you know the hill dwarfs are a decent race for a monk in 5e Dnd. The reason is that they can assign many points to DEX and have a +1 in WIS. The downside is that you can’t do much with the +2 you get for your CON stat.

Don’t be mistaken; Hill Dwarves are in no shape or form comparable to Wood Elves when we are talking about the best race for a monk. However, they can hold up their own and have a couple of aces up their sleeves.

Additionally, since this pick is so unconventional, many Dungeon Masters have a hard time dealing with it, in my experience.

Now for the final pick on the list for best races for a monk, 5e is the Half-Orc. While you don’t see a ton of half-orc monks running around in the vast world of DnD, these are pretty strong.

The Half-Orc has some strengths that make them pretty buff monks, even if you don’t get the optimal bonuses to DEX and WIS. First, thanks to the fact that you have Relentless Endurance as a half-orc, you have more hitpoints. This increase in HP is helpful if you like to play dangerously, as the average monk is pretty low on those.

Second, unless you go for a very unconventional monk, you will spend quite a bit of time-fighting melee style. The Half-Orcs get a +2 strength and can grapple. Grapple is extremely powerful in this game with the right team, so that is quite the boost. You also have the savage attack that boosts your critical hits, making your half-orc monk a real damage dealer.

Have you enjoyed this guide on picking the best race for a monk in 5e D&D? Then you will enjoy the write-up on the best class for centaur 5e?