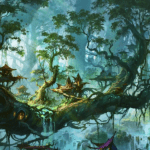 Greetings and salutations, adventurers. Are you planning on starting a new Dungeons and Dragons campaign but not sure what race to pick? Well, the Wood elf in 5e DnD is one of the best-underestimated race decisions you can make!

In this guide, we will discuss the best class for the wood elf, the lore, the background, and much more! At the end of the article, our expert will answer some of the most common questions about building a Wood Elf 5e character.

So what are Wood Elves in 5e?

Wood elves, as you might have guessed, live in the woods. These creatures have a fantastic sense and intuition. They are known to be stealthy and almost undetectable in the native forests where they are from.

The wood elves have many different subspecies that you can choose from. These are, for example, the wood elves ( or Grugach), the Greyhawk, and the Kagonesti of Dragon Lance.

Wood elves are known to be reclusive and distrusting of non-elves. However, they do seem to bond pretty well with animals and beasts. They are also referred to as forest elves by some.

These creatures love the freedom they have grown up with. Not only do they value this freedom for themselves, but they also help and protect others. They often have strong connections to nature and will not hesitate to defend it from those who would defile it. They also have a strong relationship with animals, especially wolves.

Wood elves are skilled hunters and trackers, capable of moving through the forest without making a sound or leaving a trace.

Their appearance is as you would expect, perfect to blend into a forest environment. Their skin is copper-like, like the forest ground, and has some traces and shades of green. The eyes of the wood elves generally are hazel brown or black, just like their hair. A minority of wood elves have blond hair. They are slender and are medium size (5 to 6 feet).

These creatures are only considered mature when they reach the age of 100. At that age, they also choose an adult name for themselves. Their life span is much longer than that of humans. The average wood elf can reach the age of 750 years.

The wood elf gets a +2 in Dexterity and a +1 in Wisdom. Next, they get a ton of exciting abilities you can use during your adventure. We will discuss these here:

Best classes for a wood Elf in 5e DnD

The best race for monks in dnd are the Wood Elves. This subrace is just fantastic as a monk. They get a ton of interesting abilities and a +2 Dex and +1 Wis bonus to their stats. These two bonuses are amazing for monks and just what they need to fight on the front lines and survive.

Their abilities like Mask of the Wild, Stealth, and Darkvision make them perfect for hiding from danger, lying in ambush, and fleeing away.

Another excellent pick for the 5e Wood Elf is the Rangers. The 2 Dex and weapon proficiency for multiple interesting weapons are great to make a strong ranger. Mask of the Wild is excellent for rangers that want to lay in hiding to ambush monsters. The stealth and 60 feet of darkvision also work exceptionally well for this. It is close to a monk, so the ranger is an excellent class for the wood elf, thanks to the +2 Dex bonus.

If you want to build a druid, the Wood Elf is a fantastic contender if you are still deciding on the race. They have good adherence to lighter armor, thanks to the tremendous Dex. They also have proficiency in pretty useful weapons for a Druid.

Thanks to the Mask of the Wild, you have an ability that is pretty strong in combination with Wild Shape, and other druid spells like Shapechange. It is also pretty easy to find a fitting backstory. The wood elf is not the perfect race for a druid, but it is still a pretty solid and appropriate pick.

Making a druid? Check out the Guardian of Nature 5e article we wrote!

Rogues rely on DEX almost 100%. This race has that ability more than covered. You also get a free perception proficiency, which helps you boost the Rogue’s already powerful skill. You also get a mask of the wild feature to help you hide and lay in wait. Finally, the natural proficiency in stealth and darkvision makes the wood elf a good rogue when you are doing a campaign based on tactics, not hacking and slashing.

The proficiency with weapons, like the shortsword and shortbow, is pretty great. You get a lot of extra accuracy and damage due to that additional skill. So while the Rogue is not the best class for a wood elf, it is a pretty solid pick.

If you prefer using melee when fighting enemies, then the wood elf is also a powerful choice for a dexterity-based fighter. While your strength is lacking quite a bit, your Dexterity makes up for it when you play your cards right. You need to empathize with your stealth to make the most out of this building as a wood elf.

Are you looking for a proper name for your wood elf in 5e? Wood elf names are an essential aspect of the Wood Elf culture. The first name given to a Wood Elf is usually their birth name, which is often based on the name of their mother or father. The second name is almost always the name of a tree, and the third name is often related to an animal.

Wood elves have three names: the first one is their birth name, and it’s often based on their mother’s or father’s name; the second one is usually related to a tree, and the third one can be connected to an animal.

There are many different stories about how this happened, but all agree that the humans drove them away. The wood elves were once a proud race, the rulers of the forest. But they had to flee when the humans came and destroyed their homeland. Nevertheless, they vowed to return one day and avenge those who had wronged them.

The Wood Elf backstory is about a wood elf that falls in love with a human. The story is set in the early days of the world, where animals and elves lived together peacefully. The wood elf fell deeply in love with an animal, but their parents disapproved of the union, so they separated them.

The Wood Elf was heartbroken when her parents banished her lover from the forest, but she knew they were right.

Imagine a naive and chirpy wood elf who has grown up in a safe forest and has never been in danger.

“I’m a wood elf born in the forest, but I have always wanted to explore the world. I love to travel, and I’m always looking for new adventures.

I’ve been lucky enough to have seen many places and experienced many cultures during my travels, but there’s still so much of the world that I want to see!”

Perfect for a horror 5e DnD campaign, don’t you think?

Wood elves are a fantastic race that offers a significant amount of versatility. If you choose a class that needs a ton of Dexterity, then this is the one you should pick. The best class for this subrace is the monk. However, wood elves also make great rangers and druids in Dungeons and Dragons.

If you want to start with this race, here are a couple of beginner tips to help you along your journey. First, ensure you don’t have a too low Con score if you are a monk, fighter, or ranger. You must look out for getting hit by surprise and losing your hit points in a single blow.

What is the best class for a wood elf in 5e?

The best class for a wood elf is the monk. The main reason this race makes such good monks is that they get a +2 in Dex and a +1 in Wis for their abilities. Both Dexterity and Wisdom are extremely useful for a monk in 5e. Thanks to the many interesting feats that help with stealth and hiding, they can also run away easily when things get too dangerous.

What is the base speed for a wood elf in 5e?

What is the ability modifier for a wood elf?