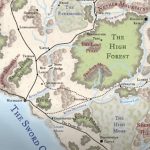 Under different circumstances, the Jungle could be a rather beautiful scenery if you’re okay with the occasional bugs and rain. But, alas, here we are, trying to find a treasure that’ll make us filthy rich while also trying to avoid being found by the guardian of this Jungle. We’ve already encountered it once, ran, and we’re still recovering.

What Should I Expect in Jungle Encounters 5e?

I tend to group swamp and Jungle encounters into one for simplicity with one minor change- beasts. In jungles, it would only be natural for more beasts to inhabit them, much more than actual monsters, unless the Jungle is somehow cursed or has some sort of abnormality.

That being said, it’s common for encounters to involve animals or beasts that would inhabit the lush jungles. Some may be in packs, some prefer solitary, and some are extremely territorial. If the DM keeps this in mind, thinking of encounters should be a breeze.

Like forests and swamps, a jungle can be treated like a whirlpool. The deeper into the Jungle a party goes, the more dangerous the encounters may be. Naturally, the outskirts of the Jungle would have less dangerous encounters since it’s more towards civilization and/or open fields. In short, the middle of the Jungle would be the most dangerous, while the edges will likely have weaker mobs.

When people think of jungles, the first things to come to mind are the tall and lush trees, waterfalls, and rivers that go for miles. However, if a dungeon master wishes to implement encounters into their world’s Jungle, they usually have to plan out what history the Jungle holds.

Is it the home to a tribe that considers the land sacred? Is there a temple that lurks in the forest that holds a treasure beyond anyone’s imagination? Maybe there’s both. Details like these help forges the way of creating these immersive encounters as a DM.

Beings of the Jungle to encounter

It’s common for DMs to put a tribe of any race or species to inhabit the forest alongside the creatures in it. They can be humanoid, giant, or fey- it doesn’t matter. When it comes to this layout, DMs usually intend to have the players interact with this group/community in one way or another. So the next course of action would be to determine what this community would want from the party… or if they want to get rid of the party entirely.

Since most jungles have extremely tall trees, bushes, rivers, and a lot of camouflage, the possibilities of where small villages or camps can be placed. For example, Willy Wonka and The Chocolate Factory or Avatar the Last Airbender had people living up in the trees in a jungle. This idea can also be implemented into your Dnd world when creating a community in the Jungle or even tiny creatures living in bushes.

Below are a few examples of encounters I used personally while my party was in a jungle.

Frequently, DMs like to implement temples or things involving druids with their jungles since jungles are usually the perfect place for that specific class. Temple layouts like these can be similar to caves or dungeons, but it’s always good to go back to the roots and remember that the temple does take place in a jungle.

Meaning it’s okay to have some Underdark monsters that may inhabit caves but make sure to include some jungle theme (and make it apparent).

For the most part, Temples are set up much like caves- the deeper the party progresses, the more dangerous the temple becomes, whether it be from traps, riddles, monsters, or any encounter they may find. It can descend further into the earth or stand tall, and the players would have to climb it- it’s really up to the DM on how they wish the party to progress.

The most important part to remember is that if the DM wishes to implement this type of layout, there should be an extremely significant reward waiting for them at the end of the story progression, an extremely rare/powerful item, etc.

Below are a few examples of jungle encounters a party may find around and/or inside the cult or druidic temples.

In my opinion, this layout is honestly my favorite. It gives players a sense of exploration, time to rack up some experience, or even enjoy roleplaying the experience of being like one of the great explorers (Indiana Jones, Lara Croft from Tomb Raider, Bilbo Baggins from The Hobbit, etc.).

This also makes encounters extremely flexible for DMs to like to have their options open for anything, which comes in handy if a DM were to have players that like to go off the story and are extremely unpredictable.

In short, this layout indicates that anything goes in this Jungle. It is a wild area where animals live, hunt, and sleep. There may be secrets here, but the Jungle is so vast and hectic that no one even knows of it besides those who may be looking. There will be hunters; there will be vines. There will be hostile and friendly animals alike. Nonetheless, this Jungle is free to explore for the players and build upon for the DM.

Below are a few 5e jungle encounters I think can be fun in this layout.

The best thing about jungle encounters is that they can be very flexible for the DM and still be extremely immersive to the players. All the DM needs to do is set the scene for the Jungle, and everything else should flow easily.

There are many types of combat-based encounters that a DM could brainstorm since most of the creatures that one may find in a regular jungle would be the creatures that inhabit the real world- lions, tigers, bears, etc. Of course, the DM is always free to implement Dnd creatures into it as long as it fits in the area.

As for non-combat encounters, it’s easy to find them within NPCs that the party may find in the Jungle and riddles they may find in the temples. Of course, there are other ways players may find them, depending on the alignments of their characters.

For example, if the players have a good alignment and see an injured animal, they would feel more obligated to help the injured animal rather than investigate or run away from it. As a DM, try to play around with your players more when creating encounters in the Jungle for a more open-world feel (my opinion).

Here’s a list of a bunch of creatures that I feel are the staples of Jungle Encounters. It should be no surprise that you would find these creatures here in the Jungle, but don’t let that stop you from believing it won’t be exciting. Sure, they may be the staple creatures, but they are also my favorites- for a good reason. Have fun!

I would say that the only con to jungle encounters is the possibility that players actually might prefer them over anything else.

They could spend possible hours just exploring this Jungle for the resources it may have: the creatures they can find, or any secrets/treasures that the Jungle holds. Other than that, it’s a fun time for both DM and players alike, as long as the DM is prepared.