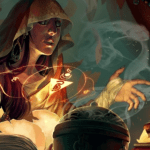 Locusts have caused plagues since the dawn of man. Insect Plague allows you to cast a 20-foot-radius sphere worth of insects to swarm on your enemies. This article will help you use Insect Plague to the best of your magic-casting abilities.

What is Insect Plague 5e: mechanics and requirements

When you say the magic words, do the hand movements and offer up the materials, biting locusts fill a 20-foot-radius Sphere centered on a point you choose within range. The Sphere spreads around corners. The Sphere remains for the Duration, and its area is lightly obscured. The sphere’s area is Difficult Terrain.

When the area appears, each creature in it must make a Constitution saving throw. A creature takes 4d10 piercing damage on a failed save, or half as much damage on a successful one. A creature must also make this saving throw when it enters the spell’s area for the first time on a turn or ends its turn there.

Upcasting: When you cast this spell using a spell slot of 6th Level or higher, the damage increases by 1d10 for each slot level above 5th.

If you want guaranteed damage dealt on your enemies, Insect Plague is the right choice. Since it inflicts magical piercing damage, you can make a hit even if it passes the save at a safe distance. Also, with its saving throw for Constitution, it is not likely for many creatures to use CON save compared to DEX saves.

Throughout your adventures, you may encounter various enemies, from spies to even assassins who lurk in the shadows. Using the spell, Insect Plague can affect any creature, whether you can see them or not, in the area being cast upon. Since it uses a rare damage type and saving through, it’s most likely to leave a good hit on your opponents. What’sWhat’s more, its features of difficult terrain and vision being lightly obscured make things difficult to catch up to.

Take this situation for example:

If you are in a dungeon with a 20 ft. radius (40 ft. in diameter), you may walk at an average speed of 30 ft. With enemies hidden in the shadows, you cast insect plague behind you; they’re bound to take damage if they pursue you. Even rogues can’t escape it using their feats because it’s CON save, which leaves them to either dispel it or use their dash action.

When you’re stuck against an enemy, you seem to have a low chance of winning; there’s no smarter choice but to escape. By casting Insect Plague on an area, you and your party have 10 minutes to make your move and leave. Given the Insect Plague’s features, difficult terrain, and lightly obscured vision, you can shake off enemies from your tail while leaving a mark on them.

Whether you are a pious cleric wanting to recreate a chapter from the Old Testament or bug your enemies, Insect Plague offers fun roleplaying opportunities to experiment with. You can use this for various things, such as fitting it to your character’s theme, using it for intimidation, or even creating a cool action scene during combat. Feel free to let your creative juices flow with the possibilities of this spell.

Insect Plague is a great choice for any casters’ spell list. Not only is it a fun, thematic choice for druids, sorcerers, and clerics to wreak havoc with, but it also offers special features that are useful to slow down your enemies while dealing a good amount of damage.

However, the caster and their party members need to avoid being in the area of effect of this spell as it will afflict you regardless of who you are. Therefore, whenever you reach level 5 or have a spell slot to spare, Insect Plague is very much recommended to bug your Dungeon Master’s plans.

Reading tip: If you are building an entomancer, you should have a look at our infestation 5e guide too!

Are the insects from the Insect Plague spell affected by other damaging spells?

In Insect Plague, there is no mentioning any stat blocks or conditions that would disperse the swarm of insects. Thus, it can be assumed that the insects in the swarms are magical.

Does the Insect Plague spell cause the damage considered magical damage?

Though it is described as afflicting piercing damage on enemies, the damage is still considered magical. Likewise, any attack damage dealt from a spell is considered to be a magical attack.

Does the Insect Plague spell damage the caster if they’re in the area of effect?

Yes, even the caster would be affected by the spell if they were within proximity or would walk into it, as there is no consideration of what creature it may be. So, the caster should stay out of range.